Advocates of Artificial Intelligence as Behaviourists 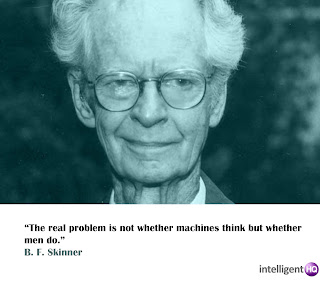 In extremely general terms, it can said that behaviourism was a response to the Cartesian (or, even more widely, Western) philosophical tradition in which behaviour, actions, and what is done by persons was seen as the outward expression of what goes on in the mind. Thus, in that sense, many of those who were initially involved in artificial intelligence (AI) were following in behaviourism's footsteps in that they believed that if a computer (or robot) behaved as if it had intelligence (or had a mind), then, almost by definition, it must actually be intelligent (or have a mind).


Many other currents in post-World War Two philosophy played-down the innards of the mind and, consequently, played-up behaviour. We had the work of the late Wittgenstein in which private mental states were seen as nothing more than "beetles in boxes". We also had Gilbert Ryle's The Concept of Mind and Quine saying that all there is to meaning is “overt behaviour”. And then functionalism (in the philosophy of mind) followed all that.

Specifically in terms of AI: it can fairly safely be said that many of the defenders of AI denied (or simply played-down) the distinction between actions (or behaviour) and what's supposed to be “behind” action (or behaviour). Thus if that "binary opposition" is rejected, then all we have to go on are the actions (or behaviour) of computers. And if computers pass the Turning test, then they're intelligent. Full stop. Indeed it's only a few behavioural steps forward from this to argue that computers actually have minds.

Of course if we follow this line to the letter, then it can be said that Zombies also have minds; as well as consciousness. And a thermostat has a little bit of a mind too.

If you think my last inclusion of a thermostat is ridiculous, then here's John Searle talking about the inventor of the term "artificial intelligence", John McCarthy. Searle writes:

“McCarthy says 'even a machine as simple as a thermostat can be said to have beliefs.' I admire McCarthy's courage. I once asked him 'What beliefs does your thermostat have?' And he said 'My thermostat has three beliefs – it believes it's too hot in here, it's too cold in here, and it's just right in here.'...” (1984)

This is where the distinction between strong and weak AI comes into play.

Weak AI proponents argue that it's unquestionably the case that some computers (or all computers?) act as if they're intelligent (or have minds). Though the operative words here are “as if”. Thus, they continue, it may take a little bit more time to develop computers which have "genuine intelligence" (whatever that is) or have minds. In other words, there has to be more than behaviour (or actions) to intelligence or mind.

Alan Turing himself put the weak AI position when he argued that it doesn't matter if a machine has a mind in the human sense: what matters is whether or not it can act in the way that human beings act – i.e. intelligently. (In those days that basically meant answering questions and solving mathematical problems.) In fact that was the crux of the Turing test which resulted in the Dartmouth proposal. Namely:

"Every aspect of learning or any other feature of intelligence can be so precisely described that a machine can be made to simulate it." (1955)

John Searle states the strong AI hypothesis (with all its behaviourist trappings) in the following way:

“The other minds reply (Yale). 'How do you know that other people understand Chinese or anything else? Only by their behaviour. Now the computer can pass the behavioural tests as well as they can (in principle), so if you are going to attribute cognition to other people you must in principle also attribute it to computers.'...” (1980)

Strong AI bites the bullet and denies the distinction between behaviour and mind/intelligence:


In other words, even though I've just written the words “as if”, there's no actual as if about it.

So why worry our pretty little heads about what must lie behind these expressions of mind or intelligence? In true behaviourist fashion, all we really need (or have!) is behaviour.

When it's said that there's no way that we can know (or tell) that a computer is sentient, it seems incredible. This is usually said about animals or even about other human beings. However, logically the same thing can indeed be said about computers; though, admittedly, not with the same force or implications.

Of course other human beings can tell us that they're sentient (even if they don't use the words “I'm sentient”). Animals, on the other hand, can hint (as it were) at their sentience. Then again, it's also possible that a future computer could do the same.

So let's get a little but more concrete about all this.

Prima facie, it does seem to be the case that when other people do intelligent things, then we (as good behaviourists) say that they're intelligent; whereas when the same actions are done by a computer it rarely evokes the same response (or, at the least, not exactly the same kind of response). After all, doesn't winning a game of chess match, etc. most people's criteria of a genuine display of intelligence?

Posted by Paul Austin Murphy at 23:47