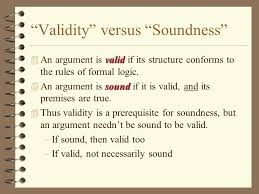 Despite the problems with unsound reasoning, most of us (or everyone!) who use such reasoning will still require that our unsound inferences be reliable to some unspecified degree. There'd be no point otherwise.


Zero reliability would make unsound reasoning useless. Alternatively, 100% reliability is impossible. Thus the reliability ratio may be, at times, somewhere in the middle.


This reliability of unsound inferences is sometimes expressed in terms of the reliability of predictions; the explanatory power of its conclusions; whether or not it relies on false, true or unknown assumptions; and what the precise status of the observations utilised are. (E.g., are they good, bad, clear or unclear?)


What also matters with unsound reasonings is the power and utility of the conclusions derived from them. Do unsound inferences and conclusions help us in any way? Are they practical? And so on.

No prediction is foolproof. Who knows what the future may bring? Even predictions about future necessities are philosophically problematic to many philosophers.


There's another way of saying that certain correct/valid forms of reasoning don't lead us to truths. This doesn’t entirely matter because they're still valid/correct (if not sound).


If we observe ten white swans, it's largely correct to infer that swans are white. However, the statement “All swans are white” is still unsound. That is, it's possible that there may be black swans. In addition, the means used to come to that conclusion didn't depend on deductive inferences and the premises might included  past observations; not axiomatic truths or deductively-derived premises.


What other kinds of unsound reasoning are there?


The inductive form is simply one of generalisation. This is something that's of vital importance not just to science and philosophy, but to everyday life as well.


One observes a finite numbers of objects or events, and from that finite (or limited) amount one generalises about what will probably be the case with all other unobserved objects or events. Without such generalisations, we'd need to wait until we'd observed every example (or sample) of the thing in question. This would be impossible to do (in most cases) in a finite amount of time.


Of course mistakes are made when we generalise, as every scientist knows. However, it's still impossible to do without generalisations, both within philosophy and without. Even those philosophers who claim never to generalise do so. In fact that very claim is a generalisation and it's also false.


There are dangers which result from generalising, not just in philosophy.

Posted by Paul Austin Murphy at 23:41