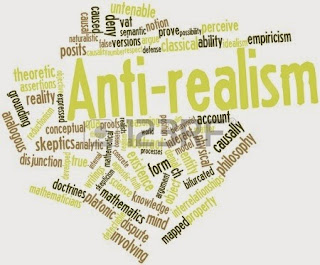 This piece deals with the nature of truth-valued statements which have semantic contents which are said to be “evidence-transcendent”. In less technical terms, the nature of unobservability and observability-in-principle are tackled within an anti-realist versus realist context.

The classic cases are covered: including the doubling in size of the universe, Bertrand Russell's flying teapot, Michael Dummett's organisms in Andromeda, past and future events, electrons, other minds and what it is to be bald.

Within these contexts, we'll also try to clarify what it is to understand statements which have evidence-transcendent content.

The realist position on truth can appear strange, at least prima facie. Take this statement:

“In 607 AD there were precisely one million people with ginger hair in Europe.”

According to the realist, that's either true or false. He may also say that it's determinately true or false (i.e., it's truth is fixed in time).

Similarly for this statement:

“Is is true [false] that Theresa May, at this precise moment, is dreaming about flowers.”

If Theresa May isn't asleep, it's false. That would be easy – in principle – to determine. Though what about if she is asleep at this precise moment? Is it still determinedly true or false that she's dreaming about flowers?

Despite that, it may well be the case that although one takes a realist position on this, one needn't take a similarly realist position on all other domains of discourse. (This is often said of anti-realism, not realism.)  More specifically, statements about Bertrand Russell's flying teapot or Dummett's organisms in Andromeda (both covered later) may well be determinately true. Nonetheless, is it automatically the case that a realist should also have exactly the same position, for example, on statements about the future? Perhaps a realist believes that statements about the future throw up problems which aren't encountered in these other domains.

Following on from that, an anti-realist can ask a realist two questions:

i) If you understand the statement “It is true [or false] that that the universe sprang into existence just five minutes ago, replete with traces of a long complex past” [worded by Bob Hale], then how do you understand that sentence?

ii) What gives you the warrant to say that it's either true or that it's false?

The realist may now reply:

What do you mean by the word 'understand' [as in “understand that sentence”]?

“Everything in the universe has doubled in size.”

“The entire universe sprang into existence just five minutes ago, replete with traces of a long and complex past.”

(These statements have been much discussed in philosophy; though not always in the context of the realism vs. anti-realism debate.)

There are many problems for the anti-realist position too; especially if anti-realism is closely tied to acts of verification (or to verificationism).

The idea that an electron is posited due to phenomena we can observe (along with theory) is parallel - or additional - to the idea of something's being observable-in-principle.

It could be said that something as tiny as the electron could be observable in principle; except for the large problem that it's deemed to be a “theoretical entity” anyway. That is, besides mathematical structure (as well as theory), there would be nothing to observe even if we could observe it. On the other hand, we can say that a distant something in our solar system could be observed in principle. That may mean that this something isn't a theoretical entity at all. Well, in a sense, it is a kind of theoretical entity in that it hasn't actually been observed. Though being, say, a teapot, it could be observed if we were able to travel to the distant place it inhabits. (Let's forget the science here!)

A similar problem arises for anti-realism when it comes to other minds. We can't observe the goings-on in other people's minds. Nonetheless, like electrons, we're led to acknowledge other minds because of the things we can indeed observe. However, in this case we still need to accept that behaviour (including speech and writing) isn't conclusive evidence for other minds.

There are many problems thrown up by other minds. Behaviourism, for one, was/is one response to these philosophical problems. And that's why certain types of behaviourist relied exclusively on behaviour (whether physical or verbal behaviour) in their experiments and musings. That meant that other minds ceased being a problem for behaviourists because minds in effect didn't (really) exist. Or, at the least, behaviourists believed - at one time - that the mind wasn't a fit subject for science.

There's also the problem of statements which involve vague concepts or references to vague states-of-affairs (if there can be such a thing!). Take the well-known case of whether a certain person is bald.

To clarify with a statement: “John is bald.” This can certainly be said to have truth-conditions (which certain earlier examples didn't have). Nonetheless, in a certain sense, truth-conditions don't really help here. That is, we have access to John and to John's head. What we don't have access to is whether or not it's true or false that he's bald. (I'm taking it here that someone can be bald even if they have a few hairs left.) Since it's already been said that truth-conditions aren't the problem, then perhaps we do have a problem with the “vague predicate” that is “bald”.

Here we encounter problems covered by a sorties paradox. Can we ignore them for now? Perhaps we can. It can be said, for example, that we can make a stipulation as to what makes someone bald. (This is deemed to be problematic if taken as a sorties paradox.) We can say that anything less than 100 hairs constitutes baldness in a given male. Consequently it can be said that it's determinately true that John is bald or not bald (i.e., post-stipulation).

What if we accept the sorties paradox? Then we'd be unable to decide (care of truth-conditions or anything else) whether or not John is bald. Nonetheless, the realist, yet again, would argue that it's a determinate fact which makes it the case that either John is bald or John isn't bald. The problem is that if we accept the paradox, we can't know either way.

Michael Dummett, for one, had a problem with this realist conclusion.

In terms of the word “bald”, that would mean that our use of words like that would have “confer[red] on them meanings which determine precise applications for them that we ourselves do not know”. Basically, that would mean that the world tells us if John is bald or not. Or, at the least, the world (including John's head) determines the truth or falsity of the statement “John is bald”. In addition, the world determines the truth regardless of whether or not we can ever determine it to be true or false. Yet surely whether or not someone is bald is something to do with what we decide. The world has no opinion on this or on anything else.

Still, this sorties paradox has an impact on the nature/reality of baldness even if we accept a conventional stipulation about baldness. That is, the logical process which leads from having, say, 1000 hairs to having a single hair is still ultimately paradoxical. That is, step by step we can move from the statement “A man has a thousand hairs is not bald” to the statement “A man with three hairs is not bald” without a hiccup.

Another way of looking at this is to say that if the realist is correct, then any indeterminacy there is has to do with our vague predicates or vague statements, not the world itself (or with John's baldness).

Michael Dummett offers us this statement:

“'There are living organisms on some planet in the Andromeda galaxy.'”

That statement, according to Dummett's realist, is “determinately true or false” [1982].

In response, the anti-realist adds an extra dimension to this case in terms of the aforementioned idea of observability-in-principle. Dummett expresses the anti-realist's (as well as, I suppose, the realist's) position in this way:

“'If we were to travel to the Andromeda galaxy and inspect all the planets in it, we should observe at least one on which there were living organisms.'”

Basically, because the science and the practicalities are so far-fetched in this case, we can't do anything else but forget them. In other words, we need to give the anti-realist the scientific benefit of the doubt. The problem here, though, is that if we give the anti-realist the benefit of the doubt about this currently unobservable situation (which is nonetheless supposedly observable-in-principle), then we can - or must – do the same in the countless other cases of unobservable phenomena in science (particularly in physics). Having said all that, these provisos may not be to the point here.

Statements About the Future

Dummett also brings up another example of something that's unobservable-in-principle: a future event. How can we deal with truth-valued statements about future events?

My prima facie position is twofold.

“there is [ ] a definite future course of events which renders every statement in the future tense determinedly either true or false” [1982].

I find realism towards statements about the future even more difficult to accept than realist claims about other domains. I would agree with Dummett when he says that the only way that a future-tensed statement can be true or false at this moment in time would “only [be] in virtue of something that lies in the present”. This is surely Dummett hinting at some form of determinism in that what is the case at this moment in time will have a determinate causal affect on what will be the case in the future. (Try to forget arguments against determinism here; as well as references to quantum mechanics, backwards causation, action-at-a-distance, etc.)

Instead of using the word “determinism”, Dummett talks about “physical necessity” instead.

Dummett picks up on an interesting consequence of what was said in the previous paragraph. What the realist must do, Dummett argues, is tell us what are the truths about the statement (or situation) at the present moment in time and how these truths bring about the truth of a statement about a future event. That means that only known truths at the present moment can contribute to truths about future events – at least within this context of “physical necessity” or determinism.

Posted by Paul Austin Murphy at 06:15