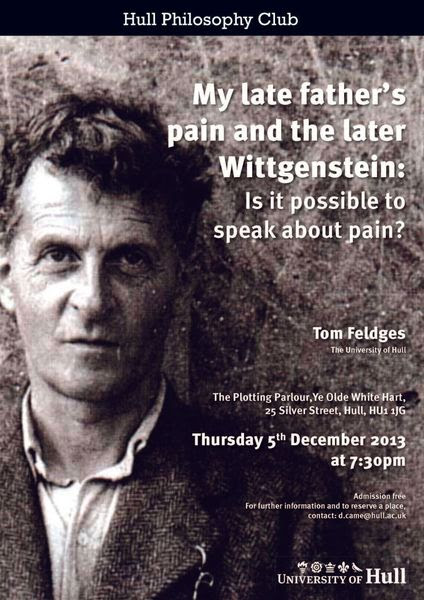 The notion of pain x belonging to a single person, and no one else, has been said to lead to a position on the necessary irreducibility of pain and indeed of all other phenomenal states.


It's also said that pain is “not dependent for its existence on anyone else”.


So where do we go from there?


If we communicate our pain to others, then we'll use a public language to do so. That language may well colour the experience of pain itself. And, as Wittgenstein argued (I think), even the private experience will be coloured by public language to some extent. Yes, there is a sensory and experiential basis to the experience of pain. Though that can't be communicated in its purity (as it were) to another or even to oneself. And it certainly isn't an “objective fact”.


The sensory experience is an x (“I know not what”) which grounds public- and self-talk about it.


Another argument for the particularity - and therefore non-scientific or even non-naturalistic nature - of pain is summed up by this sentence: “No one else could have that particular pain.”


Is that any more strange than no other brick can be like that brick over there? Even public utterances are singular in the sense that each one will be unique in some way. The colour of that bee is unique. So I'm not sure that pains are anymore particular than other things.


Ditto. One brick can replicate another brick. Still, it's not the same brick.


Pain as an Objective Fact


Some people have talked about a person's pain being an “objective fact”: as being as objective as anything else.


Yes, it's real and part of reality; though is it objective?


There is indeed “something it's like” to be stung by a bee; though to call it an “objective fact” doesn't seem to correct.


However, none of this is a complete denial of the private nature of experience or pain.


Having said that, since we take a very circuitous route to the physical reality of DNA, atoms and electrons, perhaps we can do the same for pains; though it's true that they are not like-for-like cases. Nonetheless, being “externally identifiable” may still not be a necessary criterion for something's being physical.


Just as we can't perceive the atom, so we can't perceive another person's pain except through their behaviour. We believe in the existence of atoms because of a lot of theory, models and, yes, observable phenomena (in cloud chambers, etc.). Then again, the clues we have for another person's pain don't necessarily mean that the pain is physical. The clues (behaviour) are physical; though their causes may be non-physical. (Human behaviour being equivalent to the "traces" of atoms in a cloud chamber.)


Much of the behaviourist school, Wittgenstein, functionalism, etc. was but a way to make the mental (or pain) externally identifiable and thus scientifically kosher. Nonetheless, it can be said that pain and other mental phenomena still underpinned behaviour and language-use; as well as mental functions (as they are expressed by “overt behaviour”). Thus the problem wasn't really solved.