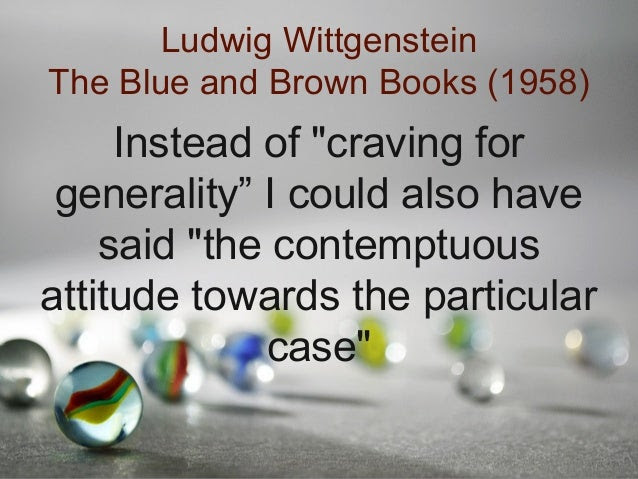 Firstly here's a quote from the philosopher Gilbert Ryle in which he talks about Wittgenstein’s general distaste for generalisations:

So what about Wittgenstein himself? He wrote:

“Our craving for generality has [as one] source … our preoccupation with the method of science. I mean the method of reducing the explanation of natural phenomena to the smallest possible number of primitive natural laws; and, in mathematics, of unifying the treatment of different topics by using a generalization. Philosophers constantly see the method of science before their eyes, and are irresistibly tempted to ask and answer in the way science does. This tendency is the real source of metaphysics, and leads the philosopher into complete darkness. I want to say here that it can never be our job to reduce anything to anything, or to explain anything. Philosophy really is 'purely descriptive'.” (1933-1935)

All traditional Western philosophy generalises about things which can't be captured by such generalisations.

is to generalise (even if we drop the quantifier “all”). Similarly, the statement that

All traditional philosophy is “concerned with the general rather than the particular”.

is itself concerned with the general (i.e., all Western philosophy) rather than the particular.

If one classes oneself as a Wittgensteinian particularist (even if one doesn't actually use that term), that statement is a generalisation about those who can be called generalists and also about what can be called generalism. (For that matter, it's also to implicitly generalise about particularists and particularism.) It's of no consequence at all if particular Wittgensteinians don't use these terms (or indeed any ists or isms). They may not use such words; though they're still tacitly committed to the concepts which these words express.

If the initial generalisation isn't taken to be the sole exception to what it claims, then it can be rewritten in this way:

All generalisations - including this one - are unclarifications.

All generalisations - including the one you're now reading - are unclarifications.

can be taken as a kind of proof (or just an example) of what it claims (i.e., if it's actually taken as an unclarification). If the statement about all generalisations implies (or entails) that it too is a generalisation (if about generalisations), then it must also suffer from the same kind of unclarity that's taken to be a property of all other generalisations.

Posted by Paul Austin Murphy at 03:19