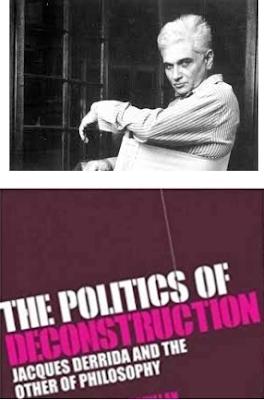 Deconstruction and/or post-structuralism attempted to “liberate the Other”. The problem is that there's an indefinite number of Others. And many Others are also at mutual odds with each other.

Whatever the case is, surely only a shared language - the language that deconstruction rejected or deconstructed - can liberate the Other. As Thomas A. McCarthy once put it:

“Deconstruction can hardly give voice to the excluded other. The wholesale character of its critique of logocentrism deprives it of any language in which to do so.”

That's why deconstruction couldn't even hint at anything directly political (rather than tangentially political) in any traditional sense. Hence the ineffable, obscure and pretentious prose. This is McCarthy again:

“It is…merely by accident that his writings contain little analysis of political institutions and arrangements, historical circumstances and tendencies, or social groups and social movements, and no constructions of right and good, justice and fairness, legitimacy and legality?”

Isn’t it the case that ‘legality’, ‘legitimacy’, ‘fairness’, ‘justice’ - and nearly all the other concepts and words referred to by McCarthy - are essentially examples of transcendental signifieds in Jacques Derrida’s book (or "text")? Thus Derrida's only interest in words/concepts (or at least his interest in political and philosophical positions) was to violently deconstruct them. If he hadn't done that, then his whole enterprise would have self-destructed (if not deconstructed) itself.

So perhaps all this is the reason why Derrida only started to wax lyrically about Marx very late in his life. For example, he wrote his Specters of Marx in 1993 – some 40 years or more after he first started writing philosophy. Yes, this was Derrida's “political turn”.

Let's go into a little detail here with the example of justice.

If Derrida had created a new concept of JUSTICE (that's if one can have a new version of an old concept), then that would have been just another “centre” or “sign substitution”. (Or at least it would have been to Derrida himself.)

That's why, for example, Marx wasn't just a “Left Hegelian”: he was still also a Hegelian. That's why “neo-Aristotelians” were/are still Aristotelians. And even an anti-Christian like Nietzsche was infected (as it were) by - and parasitical upon - Christianity itself.

So perhaps the very notion of a new version of an old concept doesn't make sense. It may be better to call it a variation on an old concept (or an elaboration on it); rather than an equivalent. If we want a strict equivalent (or just any equivalent), then why not stick with the old concept?

An alternative to an old concept, however, is a different thing entirely. This might have been what Derrida was trying to do. If that were the case, then he could hardly have used words like ‘fairness’, ‘right’, ‘legitimacy’ or any of the other words referred to by McCarthy above. Though if Derrida created an entirely new conceptual vocabulary (or a Wittgensteinian private language), then this would explain the difficulty in reading his work. Thus either he wasn't using traditional concepts at all; or he was creating new concepts - en masse. Alternatively, perhaps Derrida used old words and applied new concepts to them. In that case, complications would multiply indefinitely.

All this made Derrida's philosophy suspect and problematic when he used old words for alternative/new concepts. How would we know (as new readers) that this is what Derrida is actually doing? And if Derrida never gave definitions of his alternative concepts (which used old words), then we'd still be in the darkest of dark places.

Indeed Derrida couldn't even use the concept CONCEPT because that too belongs to the forbidden vocabulary of “traditional Western metaphysics” (as he often put it). Of course it may not even be possible to reject the concept CONCEPT and still do philosophy - or even write or speak at all (as the late Wittgenstein might have put it). Thus this was surely a rhetorical claim on Derrida’s part.

How far removed from philosophy - and indeed traditional language - can one be and still make sense and say something? Again, I can hear a Derridean reply: I'm not saying anything! This wouldn't be so far removed from Wittgenstein (in certain moods) and Heidegger who emphasised the point of pointlessness or the need to escape from traditional kinds of thinking. There's still a problem. What does non-statemental and non-conceptual philosophy look like? Is the answer simple? It looks like Derrida’s philosophy and prose.

“Writing” (a term Derrida often used) itself needs to be overcome, rejected or deconstructed. The very thing that is WRITING is highly suspect and related to (amongst other things) “violence”. That's if we can call violence violence, it it, if...

Derrida, Jacques. (1973). Speech and Phenomena and Other Essays on Husserl's Theory of Signs.
McCarthy, Thomas A. (1991) Ideals and Illusions: On Reconstruction and Deconstruction in Contemporary Critical Theory.

Posted by Paul Austin Murphy at 20:44