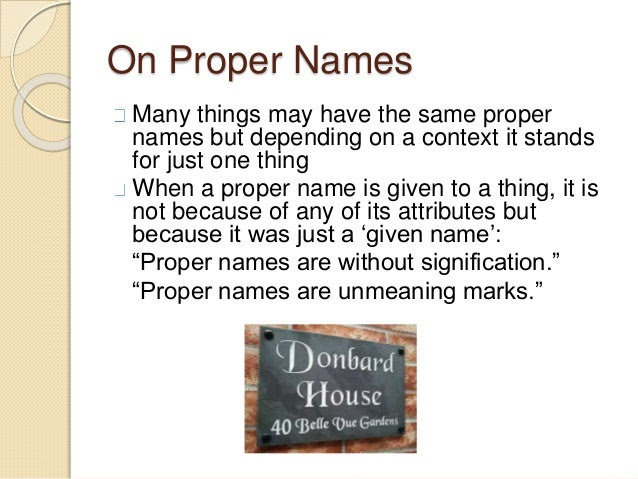 “A bare knowledge of the reference of the name a will consist…in knowing, of some object, that a refers to it, where this is a complete characterisation of this particular piece of knowledge.” [Dummett, 1991]


Dummett argues against this distinction. He says:


Can we have basic naming (or the “identification of referents”) without the latter kind of identification? What is at the ostended point? Doesn’t individuation (therefore sometimes the identification of kinds) come before the basic kind of Kripkean naming and identification? Wouldn't this be an epistemological question, rather than an ontological one? It would be a question about our knowledge of an object, rather than (the reality) of the object. It may still be the case (in conformity with Kripke) that we can only know an object to be the object it is through its ontological essence. Here again we see a philosopher making the same distinction:

“Kripke did make a feasible distinction between a description giving the content of a name and merely fixing its referent.” [Jason Stanley, 1997]

“the causal theory of names elaborated by Kripke and others. Proper names, unlike definite descriptions, can be used by speakers to refer to objects without mediation of ‘concepts’ or descriptive clusters. They can be used to capture and institutionalise an act of ostension.” [Marcus, 1978]


Why was it thought that if the reference couldn't rely on specific concepts that it could escape all concepts? Everyone would still be having causal contact with the same referent [see Donald Davidson, 1989]; though that causal contact alone wouldn't tell us which concepts or descriptions were the correct ones (if there are correct ones). If everyone were still having the same causal contact with the same object (or the same spatial region or physical mass), then that wouldn't matter. Different or even contradictory concepts would still be related to the same object or spatial region/physical mass.


Thus, in an indirect sense admittedly, acts of ostension could still be ‘institutionalised’ [Marcus, 1978]; thought we couldn't guarantee uniformity of conceptual choices. The object wouldn't be lost; though the guaranteed uniformity of concept choices would be. And, of course, if different people brought the same conceptual baggage with them, then that in itself would/could generate a certain degree of conceptual uniformity. However, that wouldn't be guaranteed. And it could be possible to generate agreement between different or contradictory concepts if the concepts of the object or spatial region referred back to the object as it is “standardly recognised” [Paul Moser, 1993]. Of course what is standardly recognised would still be a contingent matter. Even the standard conceptual description of the object would still not be the way the object describes itself. Therefore there's no reason to suppose that what is standard today will be standard next week.
Posted by Paul Austin Murphy at 02:38