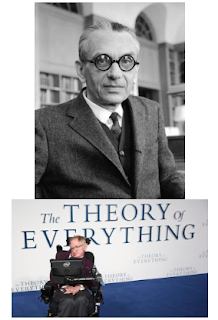 This piece isn't about deflating Kurt Gödel's metamathematics or even deflating his own comments on physics. It's about deflating other people's applications of Gödel's theorems to physics.

Indeed Gödel himself wasn't too keen on applying his findings to physics – especially to quantum physics. According to John D. Barrow:

“Godel was not minded to draw any strong conclusions for physics from his incompleteness theorems. He made no connections with the Uncertainty Principle of quantum mechanics....”


More broadly, Gödel's theorems may not have the massive and important applications to physics which some philosophers and scientists believe they do have.

For and Against Gödelised Physics

Some scientists are unhappy with the claim that Kurt Gödel's theorems can be applied to physics. Others are very happy with it. More explicitly, many people in the field claim that Gödel incompleteness means – or they sometimes simply suggest - that any Theory of Everything must fail.

For example, way back in 1966, the Hungarian Catholic priest and physicist, Stanley Jaki, argued that any Theory of Everything is bound to be a consistent mathematical theory. Therefore it must also be incomplete.

On the other side of the argument, in 1997, the German computer scientist, Jürgen Schmidhuber, argued against this defeatist - or simply modest/humble – position. Strongly put, Schmidhuber says that Gödel incompleteness is irrelevant for computable physics.

Thus, despite such pros and cons, it's still the case that many physicists argue that Gödel incompleteness doesn't mean that a Theory of Everything can't be constructed. This is because they also believe that all that's needed for such a theory is a statement of the rules which underpin all physical theories. Critics of this position, on the other hand, say that this simply bypasses the problem of our understanding of all these physical systems. Clearly, that lack of understanding is partly a result of the application of Gödel incompleteness to those systems.

Despite all the above, the relation between Gödel incompleteness and physics often seems analogical; rather than (strictly speaking) logical.

The incompleteness of physical theories taken individually (or even as groups) has nothing directly - or logically - to do with Gödel incompleteness (which is applied to mathematical systems). The latter is about essential or inherent incompleteness; the former isn't. Or, to put that differently, science isn't about insolubility: it's about incompletablity. (Though it can be said that incompleteness implies - or even entails - insolubility.)

This analogical nature is seen at its most explicit when it comes to scientists and what may be called their scientific humility or modesty.

For example, Stephen Hawking, in his 'Gödel and the End of Physics', said:

“I'm now glad that our search for understanding will never come to an end, and that we will always have the challenge of new discovery. Without it, we would stagnate. Gödel’s theorem ensured there would always be a job for mathematicians. I think M theory will do the same for physicists. I'm sure Dirac would have approved.”


This position is backed up by the words of Freeman Dyson. He wrote:


Stephen Hawking originally believed in the possibility of a/the Theory of Everything. However, he came to realise that Gödel's theorems will be very relevant to this theory. In 2002 he said:

"Some people will be very disappointed if there is not an ultimate theory, that can be formulated as a finite number of principles. I used to belong to that camp, but I have changed my mind."


However, Hawking does seem to be ambivalent on this issue. Specifically when it comes to the analogical nature of Gödel incompleteness and incompleteness in physics.

Stephen Hawking himself uses the word “analogy”; at least within one specific context. That context is “a formulation of M theory that takes account of the black hole information limit”. He then, rather tangentially or loosely, says that

“our experience with supergravity and string theory, and the analogy of Gödel's theorem, suggest that even this formulation will be incomplete”.

There's another statement from Hawking that's also really about analogies. (With his use of the word “reminiscent”, Hawking - more or less - says that himself.) Hawking says:

“Maybe it is not possible to formulate the theory of the universe in a finite number of statements. This is very reminiscent of Gödel’s theorem. This says that any finite system of axioms is not sufficient to prove every result in mathematics.”


The question is how reminiscent is reminiscent? Is it vague or strong? Is is substantive or simply analogical? Indeed, on the surface, it's hard to know how to connect the statement that “any finite system of axioms is not sufficient to prove every result in mathematics” to physics generally. Apart form the fact that, yes, physics utilises mathematics and can't survive without it.


Despite mentioning that tight link, it's a jump from the “mathematical results that cannot be proved” bit to “there are physical problems that can not be predicted” conclusion. The argument must be this:

Is “proof” an apposite word when it comes to physical predictions?

Hawking stresses one reason why physics can be tightly connected to mathematics in a way which moves beyond the essential usefulness and descriptive power of maths. He cites the “standard positivist approach” again.

“a [mathematical] model can be arbitrarily detailed and can contain an arbitrary amount of information without affecting the universes they describe”.


This, on the surface, sounds like Hawking is describing an extreme case of constructivism in physics. Or, since Carnap has just be mentioned, is this simply an example of (logical) positivist pragmatism or instrumentalism?

Hawking doesn't appear to like this extreme constructivist/anti-realist/positivist (take your pick!) pragmatism. Firstly he says that the mathematical modelers “are not [people] who view the universe from the outside”. He also states the interesting (yet strangely obvious) point that “we and our models are both part of the universe we are describing”. Thus, just like the axioms and theorems of a system, even if there are many cross-connections (or acts of self-reference) between them, they're all still part of the same mathematical system. Hence the requirement for metamathematics (or a metalanguage/metatheory in other disciplines).

Finally, all this stuff from Hawking is tied to Gödel himself.

Hawking says that mathematical modelers (as well as their models and “physical theory”) are “self referencing, like in Gödel's theorem”. Then he makes the obvious conclusion:

“One might therefore expect it to be either inconsistent or incomplete.”


Isn't all this is a little like a dog being unable to catch its own tail?

Self-reference and dogs have just been mentioned. Here the problem gets even worse.

Gödel’s metamathematics is primarily about self-reference (or meta-reference). As Hawking puts it:


Now how can self-referential statements or even paradoxes have anything to do with the world or physical theory? Indeed do the realities/theories of quantum mechanics even impact on this question? (Note Gödel's own position on QM as enunciated in the introduction.) Are there paradoxes in quantum mechanics? Are there cases of self-reference? Yes, there are highly counter-intuitive things (or happenings) in QM; though are they actual paradoxes? I suppose that one thing being in two places at the same time may be seen as being paradoxical. (Isn't that only because we insist on seeing subatomic particles, etc. as J.L. Austin's “medium-sized dry goods” - indeed as particles?) Some theorists, such as David Bohm, thought that QM's paradoxes will be ironed out in time. So too did Einstein.

The ironic thing is that - according to Hawking - Gödel himself tried to iron out the paradoxes from his mathematical theories (or systems). Hawking continues:

Here again the problem is self-reference. The solution was - and still is - to distinguish mathematics from metamathematics. In the 1930s, Alfred Tarski did the same with his metalanguages and object languages in semantics. Indeed, even before Gödel and Tarski, Bertrand Russell had attempted to do the same within set theory when he distinguished sets from classes (as well as the members of sets from classes) in his “theory of types” (a theory established between 1902 and 1913).

Proof and the Theory of Everything

Wouldn't a/the Theory of Everything be a summing up (as it were) of all physical laws? Thus wouldn't it be partly - and evidently - empirical in nature? Surely that would mean that mathematics couldn't have the last - or the only – word on this.

This is also a case of whether or not proof is as important in physics as it is in mathematics. Indeed, on certain arguments, there can be no (strict) proofs about physical theories.

For example, some have said that the/a Theory of Everything will need to expressed as a proof. Nonetheless, that proof will still be partly observational (or partly empirical – i.e, not fully logical). However, even if only partly observational and largely mathematical, how can it still guarantee a proof? How can there be any kind of proof when a theory includes observations or experimental evidence?

Posted by Paul Austin Murphy at 04:41