David Chalmers' Thermostat and its Experiences 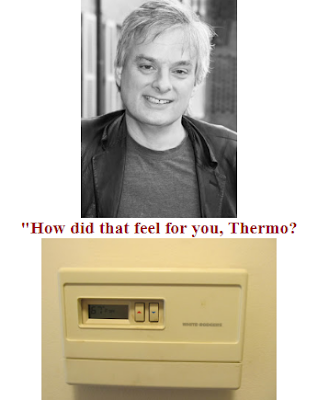 [The words "experience" and "consciousness" are used interchangeably in this piece; even though they aren't synonyms.]

David Chalmers says that “information is everywhere”. Is that really the case?

As some linguists (or pedants?) have said: “If everyone is brave, then no one is brave.” The point being made here is that a term only makes sense if it can be distinguished from non-examples. However, my example is an adjective (“brave”) applied to human persons. The word “information” is a noun. So saying “information is everywhere” is roughly equivalent to saying “dust is everywhere”.

Information is surely a characteristic of things, events, conditions, etc: rather than a thing in itself. However, none of this may matter. A prima facie problem with the omnipresence of information may fade away on seeing what David Chalmers - and other “information theorists” - have to say about information.

In addition: if, as Chalmers argues,

“experience itself as a fundamental feature of the world, alongside mass, charge, and space-time”

then, by definition, experience can't be exclusive to humans or animals generally. Something that's a “fundamental feature of the world” must literally be everywhere; just as Chalmers says about “mass, charge, and space-time”.

This means that Chalmers' linkage of experience to information is thoroughly non-biological.

Chalmers also links experience - therefore information - to thermostats. A thermostat isn't alive; yet it can still be seen as a (to use Chalmers' words) “maximally-simple” information system.

Scott Aaronson (referring to Integrated Information Theory), for one, states one problem with the experience-is-everywhere idea in the following passage:

However, there's the remaining question:

The word 'information' has massively different uses; some of which tend to differ strongly from the ones we use in everyday life. Indeed we can use the words of Claude E. Shannon to back this up. He wrote:

"It is hardly to be expected that a single concept of information would satisfactorily account for the numerous possible applications of this general field."

The most important point to realise is that minds (or observers) are usually thought to be required to make information information. However, information is also said to exist without minds/observers. Some philosophers and physicists argue that information existed before human minds; and it will also exist after human minds disappear from the universe. This, of course, raises lots of philosophical and semantic questions.

It may help to compare information with knowledge. The later requires a person, mind or observer. The former (as just stated), may not.

If we move away from David Chalmers, we can cite Guilio Tononi as another example of someone who believes that consciousness/experience simply is information. Thus, if that's an identity statement, then we can invert it and say that

Integrated Information Theory (IIT) isn't only close to Chalmers' view when it comes to information-equaling-experience, Tononi is also committed to a form (there are many forms) of panpsychism.

Clearly we've entered the territory of panpsychism here. Not surprisingly, Tononi is happy with panpsychism; even if his position isn't identical to Chalmers' panprotopsychism.

To slightly change the subject for a second.

John Searle has a problem with the overuse of the word “computation”. He cites the example of a window as a (to use Chalmers' words again) “maximally-simple” computer. Searle writes:

“... the window in front of me is a very simple computer. Window open = 1, window closed = 0. That is, if we accept Turing’s definition according to which anything to which you can assign a 0 and a 1 is a computer, then the window is a simple and trivial computer.”

Searle's basic point is that just about anything can be seen as a computer.
Indeed computers are everywhere – just like Chalmers' experience. Does this tie in with Chalmers' position on information and maximally-simple information-processing?

In other words, does a window contain information? By that I don't mean the information that may exist in a window's material and mechanical structure. (According to many, a window - being a physical thing - must contain information.) I mean to ask whether or not a window - like a thermostat - has information qua a technological device which is designed to be both opened and shut?

Searle will of course conclude that this is an example of information-for-us.

Searle also has something to say about information (not just computers). He writes:

This appears to be the same as Chalmers' position. Needless to say, Searle has a problem. He concludes:

"I think that if you analyze this carefully, you will see that the view is incoherent. Consciousness is independent of an observer. I am conscious no matter what anybody thinks. But information is typically relative to observers...

As for thermostats, Searle has something to say on them too. He writes:

This means that this is a Searlian way (as with Dennett) of taking an “intentional stance” towards thermostats. We can treat them - or take them - as intentional (though inanimate) objects. Or we can take them as as-if intentional objects.

To get back to Searle's position on information.

For one, it's certainly the case that some – or even many – physicists and mathematicians don't see information in Searle's strictly philosophical or semantic way. In addition, Integrated Information Theory's use of the word 'information' also receives much support in contemporary physics. This support includes how such things as particles and fields are seen in informational terms. As for thermodynamics: if there's an event which affects a dynamic system, then that too can read as being informational input into the system.

Indeed in the field called pancomputationalism, (just about) anything can be deemed to be information. In these cases, that information could be represented or modeled as also being a computational system.

Thus we now have three positions:

A Thermostat and its Experiences

Firstly, let me offer Wikipedia's definition of a thermostat:

“A thermostat is a component which senses the temperature of a system so that the system's temperature is maintained near a desired setpoint...

“A thermostat exerts control by switching heating or cooling devices on or off, or by regulating the flow of a heat transfer fluid as needed, to maintain the correct temperature...”

What does Chalmers himself mean by the word 'information' when it comes - specifically - to a thermostat? He writes:

“Both [thermostats and connectionist models] take an input, perform a quick and easy nonlinear transformation on it, and produce an output.”

Thus does a thermostat have as-if information (to use Searle's term, which is usually applied to intentionality)? Or does it have real (first-order) information? In other words, does the fact that a thermostat is designed by human beings automatically stop it from having experiences which are themselves determined by its informational innards?

Finally, in one piece Chalmers tackles the case of NETtalk and asks us whether or not it does (or could) instantiate experience. He writes:

“NETTALK, then, is not an instantiation of conscious experience; it is only a model of it.”

Of course we can now rewrite that passage in the following way:

A thermostat, then, is not an instantiation of conscious experience; it is a model of it.

The question is, then, whether or not Chalmers has mixed up models with realities (as it were). NETtalk is certainly more complex than a thermostat. However, Chalmers has often argued that complexity in itself (in this case at least) may not matter.

The Appeal of Simplicity & Complexity

Chalmers plays up simplicity. He also plays down complexity. For example, Chalmers writes that “one wonders how relevant this whiff of complexity will ultimately be to the arguments about consciousness”. He goes further when he says that

“[o]nce a model with five units, say, is to be regarded as a model of consciousness, surely a model with one unit will also yield some insight”.

I presume that a thermostat has more than “one unit”; though we'd need to know what exactly a unit is.

Chalmers also makes what seems to be an obvious point – at least it seems obvious if one already accepts the information/experience link. He writes:

Can we go simpler than a thermostat? Perhaps we can if this is all about information; though that would depend on our position on information. What about a dot on a piece of paper which is then made completely blank (i.e., at a later stage when the dot has been erased with a rubber)?

Chalmers also gives a biological (or “real life”) example of this phenomenon. He writes:

“We might imagine a traumatized creature that is blind to every other distinction to which humans are normally sensitive, but which can still experience hot and cold. Despite the lack of superposition, this experience would still qualify as a phenomenology.”

At a prima facie level, it does indeed seem obvious that complexity matters. After all, many theorists have made a strong link between the complexity of the brain and consciousness. Chalmers himself acknowledges the (intuitive) appeal of complexity. He writes:

“After all, does it not seem that this rich superposition of information is an inessential element of consciousness?”

Of course Chalmers then rejects this requirement for complexity.

Having said all that, we can also quickly consider Phillip Goff's argument here. He argues that there may be “little minds” (or seats of experience) in the brain, and all of them, on their own, are very simple. Now, of course, we have the problem of the “composition” (or "combination") of all these little minds in order to make a big mind.

What is Simple Experience?

When Chalmers says that

I suppose I can imagine a very simple pain. (Pain can certainly be experienced.) Or would that only be a mild pain; rather than a simple pain? (Some philosophers have argued that there needs to be more than phenomenology for a pain to be pain.)

Now what about a mouse? A mouse has a brain and sensory organs. So, obviously, it's vastly different to a single-celled organism and a thermostat. Nonetheless, the idea of a very-simple experience is still problematic.

Posted by Paul Austin Murphy at 22:22