Chalmers and the Evolutionary Point of Consciousness 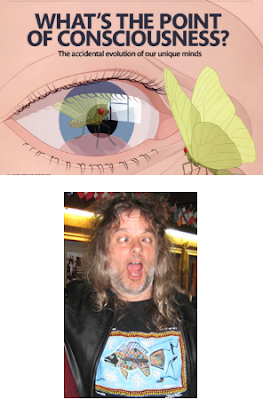 
The following piece doesn't tackle David Chalmers' well-discussed and well-known Hard Problem. That is, it doesn't attempt to find an answer to the question:

Why does the physical brain give rise to consciousness?

Instead, it asks us why we human beings - and other animals - needed consciousness in the first place. Thus we have this question:

From an evolutionary perspective, if the functions of the brain (which Chalmers often refers to) might have occurred “in the dark”, then why did we need (if we did need) - and why do we still need/have - consciousness?

The nature of the physical-consciousness link is only tangential to this issue.

Is it really possible that experience/consciousness is truly gratuitous from an evolutionary – or from any – point of view?

“Why is the performance of these functions accompanied by experience?”

is that experience (or consciousness) may - or does - contribute to these functions. It adds something.

The most important point against the (possibly) adaptive nature of consciousness (i.e., how it may “increase fitness”) is an idea – often stressed by Chalmers himself - that consciousness doesn't (or may not) add anything to the brain functions which underpin it. In other words, such brain functions may achieve the same advantages for survival even if higher organisms didn't have consciousness. This possibility clearly ties in with Chalmers' fixation on zombies. That is, zombies have the same physical brains and mental functions as conscious human beings. However, they're also “devoid of mentality”.

Perhaps we shouldn't see the divide between x's being advantageous and x's being disadvantageous in such absolute terms. After all, it's also been said that the brain's big size and weight weren't (really?) conducive to human survival. (More precisely, the human brain is much bigger than all the other brains in the mammalian species.) Nonetheless, a big consciousness and a big set of cognitive skills are also a result of a big and heavy brain.

It's not surprising that Peter Carruthers (i.e., as a philosopher) should explicitly say that consciousness itself is conducive to survival and it is so in a strictly philosophical sense. Carruthers has argued that consciousness allows us – and other beings – to "distinguish appearance from reality". Now what could be more conducive to survival than that useful philosophical skill?

We can give a quick and easy example of this appearance-reality problem for survival.

Take the case of a very-hungry creature which was able to work out whether or not the water he sees in the distance is a mirage. If this creature hadn't had this evolutionary advantage, then it might have wasted valuable time and energy traipsing towards non-existent water. It might have even died in the process.

If we get back to Carruthers' philosophical Sahelanthropus man and other philosophical creatures. Many philosophers have also said that “accurate representations” (Richard Rorty) - and even truth itself - were irrelevant when it came to survival. Though surely this can't apply to Carruthers' mirage example!

Consciousness is Good for Us

The fact still seems to be that because all of this could occur in the dark, then we need to explain why it doesn't. Though, as already stated, what if what occurs in the dark is at a lesser (evolutionary) level than what occurs in the light? Indeed isn't that obviously the case? With, say, microorganisms or even spiders, everything does (or may) occur in the dark. With adult human beings, that's simply not the case. And that's why we live and experience at a higher evolutionary level than microorganisms or spiders.

Despite the above, Chalmers himself writes:

“This is not to say that experience has no function. Perhaps it will turn out to play an important cognitive role.”

I would say that it obviously does; especially from an evolutionary perspective. There are indeed epiphenomenal attributes (or hangers-on) when it comes to evolution. However, why should we believe that consciousness/experience itself fits that bill? I don't see how experience could be like, say, a human's little toe: i.e., something that serves no purpose. Having said that, just as all human beings have experiences, so too do all humans have little toes.

This is Frank Jackson (in his well-known paper 'Epiphenomenal Qualia') on the subject of bears.

“… Having a heavy coat is an unavoidable concomitant of having
a warm coat (in the context, modern insulation was not available), and the advantages for survival of having a warm coat outweighed the disadvantages of having a heavy one. The point is that all we can extract from Darwin's theory is that we should expect any evolved characteristic to be either conducive to survival or a by-product of one that is so conducive.”

There are of course many other things which are deemed to be byproducts of evolution. Perhaps a more relevant example is the the blind spot in the retina. In this case, the blind spot wasn't an adaptation of the retina: it was simply a byproduct of the way the retinal axons were/are wired.

To return to Frank Jackson's warm-and-heavy coat example. Jackson concluded the quoted passage above by tying all this to qualia: He wrote:

“The phenomenalist holds that qualia fall into the latter category [i.e., an epiphenomenal byproduct or evolution].”

That is, qualia are (or may be) a byproduct of evolution. It also follows from this that they are – or may be - epiphenomenal. However, that doesn't necessarily follow. Something that's an evolutionary byproduct needn't also be epiphenomenal. Or, in our case, it needn't also be non-conducive to survival. Sure, there's a mountain of philosophical arguments which have stated that Jackson's qualia - and even consciousness itself - are epiphenomenal; though this particular argument-from-evolution doesn't establish that.

Neuroscience on the Point of Consciousness

It may help to give some neuroscientific examples of this nonconscious/consciousness opposition (or distinction).

We can say that actions (or movements) which are related to reflexes, vegetative functions, low-level perceptual analyses, unconscious motor programs, etc. all occur at the non-conscious level. However, clearly there are also things which are products of consciousness: perception, language, cognition, integration, memory, etc. However, even some of these examples could still occur without consciousness. Thus we're left with two conclusions:

A more down to earth – or neuroscientific – explanation of the adaptive point of consciousness is the position that conscious states integrate neuronal activities and processes. This has been called “the integration consensus”. A more technical variant on this has been offered by Gerald Edelman. His “dynamic core hypothesis” is about the “reentrant connections” which link different areas of the brain in a “massively parallel manner”.

Nonetheless, the autonomy-from-consciousness problem arises here too. It's certainly the case that there are kinds of information that are integrated without also being conscious. However, simply because there is such nonconscious integration, that doesn't automatically mean that conscious integration is ruled out of the picture. Clearly the two can stand side by side. It's still the case, however, that nonconscious processing creates philosophical and scientific problems for the philosopher and scientist. Nonetheless, like the possibility of zombies, these problems don't - in and of themselves - logically or metaphysically rule out consciousness.

Thus it's certainly a fact that we don't always know which kinds of information are integrated by consciousness and which aren't. However, that doesn't have an impact on consciousness itself or even on its role in helping us survive.

Yes, there are indeed nonconscious functions or processes. So what?...

Chalmers himself now fully accepts (I believe) some form of panpsychism.

The panpsychist position doesn't have it that consciousness/experience evolved from something else. It's been with us (or with the universe) since the very beginning - perhaps since just after the Big Bang. Thus the advantageous/not-advantageous-to-survival distinction doesn't seem to be that relevant in the case of panpsychism.

Of course it can also be said that even if panpsychism is true (and that experience/consciousness has always been with us), then it may still be the case that experience wasn't advantageous to survival. That is, panpsychism doesn't seem to tie in very well with evolutionary theory; at least in this respect. If experience has always been with us (or with the universe), then it can't have evolved to have given us an evolutionary advantage.

Though is it that simple?

Even if experience has always been with us, it might still have been the case that evolution got to work (as it were) on it. What I mean by this is that evolution changes biological matter. According to panpsychism, all the parts of biological – as well as inanimate! - entities have consciousness/experience. However, evolution impacted on the arrangements of biological entities so as to make some examples which were better equipped to survive than others. Thus those pockets of biological matter which resulted would still have included phenomenal properties - all the way down. Yet it might also have been the case that the new arrangements of matter (care-of evolution) brought phenomenally-basic entities into new alignments which - being more complex biologically and therefore phenomenally - made them better equipped to survive.

Thus, depending on how we look at this, there are two possible responses to this panpsychism-evolution situation:

i) If phenomenal properties have always been with us, then that fact alone is hard to square with evolution.
ii) Even if experience has always been with us, then there's nothing to rule out the possibility that evolution itself might have had an impact on phenomenal properties (non-teleologically, of course) by making them the parts of more complex biological entities. This would have made the aforesaid biological entities more phenomenally complex too.

It's certainly possible that all the brain functions and processes (which David Chalmers often refers to) might well have occurred - and could still occur - “in the dark”. However, not all of them do occur in the dark. (As Philip Goff puts it: Consciousness is a primary "datum in its own right"; which - by definition - can't be ignored.)

As to how experience/consciousness is added to - or comes from - these functions (or from the brain itself), then that seems to be a different question. And it is indeed problematic and difficult.

However, if the evolutionary approach sketched above is broadly correct, then Chalmers' Hard Problem doesn't (or perhaps shouldn't) bring forth the following why-question:

Why does the physical brain give rise to consciousness?

Instead it simply raises (or perhaps should raise) the following how-question:

How does the physical brain give rise to consciousness?

Posted by Paul Austin Murphy at 14:15