John Searle says “it's all syntax and no semantics” 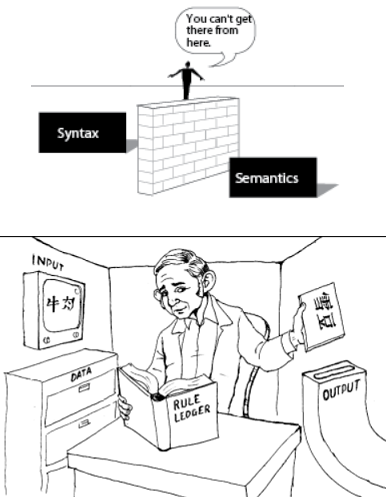 i) Introduction
ii) In Reference to Reference
iii) Mental Content

This is a simple introduction to the philosopher John Searle's main argument against artificial intelligence (AI). This means that it doesn't come down either for or against that argument.

The main body of the Searle's argument is how he distinguishes syntax from syntax. Thus the well-known Chinese Room scenario is simply Searle's means of expressing what he sees as the vital distinction to be made between syntax and semantics when it comes to debates about computers and AI generally.

One way in which John Searle puts his case is by reference to reference. That position is summed up simply when Searle (in his 'Minds, Brains, and Programs' of 1980) writes:

So whereas what Searle calls the “English subsystem” involves a complex reference-relation which involved entities in the world, mental states, knowledge of meanings, intentionality, consciousness, memory and other such things; the Chinese subsystem is only following rules. (The computer will have a memory; though a memory with none of the features talked about here.) That is, when the input 'squiggle squiggle' is fed in, the Chinese subsystem delivers (or computes) the answer 'squoggle squoggle'. This is really a simple case of the computer (or Chinese subsystem) following x with y. And that's simply the result of following a rule (or an algorithm). Again, knowledge of meanings, intentionality, consciousness, etc. aren't required in this simple case of following a rule/algorithm.

When its puts like this it seems that the computer/Chinese subsystem is a system which is of the same type as a thermometer; except that the system is more complex and it involves inscriptions and rules/algorithms. (Then again, a thermometer can be given a computational or mathematical explanation/description too!)

Margaret A. Boden (in her paper 'Escaping from the Chinese room' - 1986) offers a little more detail on what she calls the “causal semantics” of reference (whether beliefs or individual words/terms). She writes:

“In a causal semantics, the meaning of a symbol (whether simple or complex) is to be sought by reference to its causal links with other phenomena.”

Above a beyond that, Boden does ask a couple of questions about this aspect of causal semantics. She writes:

“The central questions are 'What causes the symbol to be built and/or activated?' and 'What happens as a result of it?' The answers will sometimes mention external objects and events to an observer, sometimes they will not.”

The first point to make here is that it's obvious that a computer (or even a man in a Chinese room) has no causal links to the things it's answering questions about. Of course it can be said that there are indirect causal links. Indeed some theories of causal reference (or semantics) have tackled these indirect (or circuitous) causal links.

The final clause about sometimes not mentioning external objects is possibly a reference to some of the problems found with causal semantics. Such problems include that of a reference-relation to a non-existent entity or to an event which occurred in the past. There are various solutions to these problems. However, I don't think they are relevant to the issue under discussion because some of these causal accounts of reference to non-existent entities still supply us with causal explanations.

The usual way that other people have put Searle's position is by saying it's a case of syntax vs. semantics. Though Searle expresses pretty much the same thing here in terms of form vs. mental content. This is how Searle himself puts it:

“... the program is purely formal, but the intentional states are not in that way formal. They are defined in terms of their content, not their form.”

That's the technical terms “form” and “content” out of the way. What, exactly, does Searle mean by them? He continues:

“The belief that it is raining, for example, is not defined as a certain formal shape. But as a certain mental content with conditions of satisfaction, a direction of fit and the like. Indeed the belief as such hasn't even got a formal shape in this syntactic sense, since one and the same belief can be given an indefinite number of different syntactic expressions in different linguistic systems.”

Here we find two technical terms/phrases which were (as far as I know) coined by Searle himself. In fact they're more or less two ways of saying the same thing: viz., “conditions of satisfaction” and “direction of fit”.

Conditions of satisfaction seems to be a phrase which belongs to a theory of reference in that in order for a word or a belief (in Searle's example) to have a reference to something outside the head (or beyond the page), it must have conditions of satisfaction. There must be something in the world (a condition) which satisfies the belief (or word). In Searle's example, the belief that it is raining has the condition of satisfaction if and only if it is indeed raining. (This appears to be similar to a Tarskian T sentence in which the sentence is simply disquoted to provide its truth conditions.)

I've just mentioned that non-formal beliefs or mental content generally can indeed be given formal shape when expressed in words or symbols. Searle himself says that

“the same belief can be given an indefinite number of different syntactic expressions in different linguistic systems”.

That means that belief P can become, for example, S1, S2, S3... Sn when it's expressed. S1, S2, S3... Sn are the syntactic expressions of P. In all these cases, P remains the same; whereas S will differ syntactically. In other words, the belief that it is raining can become “It is raining”, Il pleut, 「雨が降っれます」or be given an artificial expression in some kind of computer code. The belief it is raining can even be expressed in Morse code; providing we have a translation manual and we know the translation.