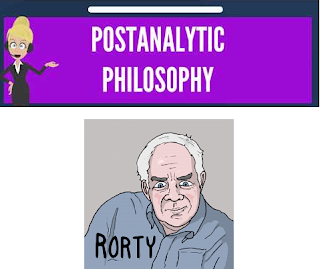 The term 'post-analytic philosophy' was first used in the mid-1980s. At that time it referred to those philosophers who were indebted to analytic philosophy but who nonetheless believed that they'd moved on from it (for whatever reasons).

The term seems, prima facie, odd. After all, how can philosophers be 'post'- or anti-analysis? Surely even most examples of post-analytic philosophy will contain analyses of sorts. (This isn't necessarily to say that philosophy must consist entirely of analysis.)

The above are all prima facie problems which, to some extent, subside once the history and use of the term 'post-analytic philosophy' is studied.

If we want to put meat on what post-analytic philosophers see to be the problem (or simply a problem) with analytic philosophy, it's best to consult late-20th century and contemporary American pragmatism. This school is itself seen as being part of the post-analytic movement (i.e., which isn't a determinate school).

Many would say that such American pragmatists have a problem with the very notion of objective truth, realism and representationalism. They are things they see as being an idée fixe throughout the history of philosophy. And this, indeed, was no less the case when it came to 20th-century analytic philosophy.

In any case, the position that objective truth doesn't exist (or that it's not a worthy aim in philosophy) goes alongside a stress on the contingency of cognitive activity; the importance of convention and utility; and, indeed, the idea that human (or social) progress can never be ignored – not even in philosophy. Nonetheless, here again I don't see how there's an automatic or prior problem with accepting all this and still engaging in analytic philosophy (or in philosophical analysis).

Strangely enough, Richard Rorty seems to agree with this position. Or, at the least, he says something similar. In an interview conducted by Wayne Hudson and Win van Reijen, Rorty states:

Philosophy Must be Political?

The problem is that, on and off, analytic philosophy has already connected itself to many other disciplines. (Admittedly, that's been more the case since the 1980s and the rise of cognitive science.) To give just a couple of examples: the logical positivists connected themselves to science (or at least to physics). And, to give another example: philosophers in the 19th century connected themselves to logic, mathematics and, again, to science. This non-ostentatious “interdisciplinary” nature of philosophy has been the case, in fact, throughout the history of philosophy.

Another slant on this philosophy-society "binary opposition" is that it is argued that analytic philosophy is too professional and therefore too narrow. In other words, analytic philosophers are over-concerned with very tiny, narrow and specialised problems which have almost zero connection to society as a whole or indeed to anything else.

More technically and philosophically, it can also be argued that certain central commitments and assumptions of analytic philosophy have been shown to be indefensible. (Hence Putnam's own words quoted earlier.)

Yet all disciplines can be said to concerned with narrow or specialised issues or concerns. Yet this is an accusation more often aimed at philosophy than at any other academic subject.

Take the view that analytic philosophy has as its primary aim a form of knowledge which grounds all other forms of knowledge. This is odd. It's true that much traditional philosophy has placed various philosophical domains in the position of what used to be called First Philosophy. (It was once metaphysics, then epistemology, then language, then mind...) However, in the 20th century this has been far from the case. Indeed philosophers - throughout the 20th century - have argued against the nature of a first philosophy.

It must be said that just as Rorty's post-philosophy is a philosophical position, so too is the Wittgensteinian attempt to “dissolve” and then disregard philosophical problems (if not philosophy itself). This position can be said to be held by Putnam and John McDowell, as well as by Rorty. (A more specific example of this would be the “problem” of how mind and language are connected to the world.)2

In any case, there's just as strong case for arguing that Rorty's later position was more a case of post-philosophy than post-analytic philosophy. In other words, like Heidegger and Derrida, Rorty had a problem with the whole damn show that is philosophy. And, here again, it can be argued that Rorty's position was more political (or social) than strictly philosophical. Though, of course, a position that rejects philosophy in toto can't help being philosophical – in some or many ways – itself; as Rorty would have no doubt happily admitted. (Jacques Derrida did admit this.)

1) For example, if you say that an argument (or a single statement) is “warranted and therefore assertible”, then is that a case of being wedded to the notion of objective truth? Or is the notion of warranted assertibility a different species entirely?


2) I put the word “problem” in scare quotes because the very stance of seeing such problems as problems means - according to Rorty, Derrida, Heidegger, etc. - that we've fallen prey to particular philosophical “style of thinking”. But that too would be a philosophical position.

Posted by Paul Austin Murphy at 03:44