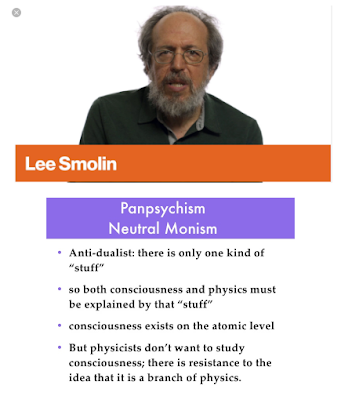 Lee Smolin is a theoretical physicist with many philosophical interests and inclinations. (From Democritus to Leibniz.) This interplay between science and philosophy is played out in Smolin's writings.

So let Smolin lay his cards on the table. He writes:

"[T]here are questions that science cannot answer now but that are so clearly meaningful that sometime in the future, it is hoped, science will evolve language, concepts, and experimental techniques to address them."

Does Smolin believe that "science cannot address" what he calls "intrinsic essence" - and thereby consciousness and qualia?

It would seem that Smolin does believe that. One may speak for Smolin here and say that although science will progress in the future, the "hard problem" (to use David Chalmers' term) will remain beyond it. So this isn't even a issue of insolubilia versus incompletability (i.e., the position which states that even though science's problems are soluble in principle, science will never be complete). No, this is a position that embraces insolubility regardless of completability.

Bearing in mind all the above, Smolin explicitly places his intrinsic essences outside the ambit of science. Or at least he does so when it comes qualia and consciousness. He writes:

"The problem of qualia, or consciousness, seems unanswerable by science because it's an aspect of the world that is not encompassed when we describe all the physical interactions among particles."

"Neuronal processes are subject to description by physics and chemistry, but no amount of detailed description in those terms will answer the questions as to what qualia are like or explain why we perceive them."

Firstly, do all scientific accounts only "describe all the physical interactions among particles"? No - cognitive science (or linguistics, psychology, artificial intelligence, philosophy and neuroscience) isn't concerned with interactions among particles. Smolin seems to be demanding either a reductive science or no science at all. Nonetheless, on Smolin's behalf it can be said that various sciences do indeed deal with these aspects of the mind and brain: they just don't deal with qualia and consciousness. Some philosophers and scientists would beg to differ with that too.

Again, must a science of mind and brain be entirely devoted to "neuronal processes" and therefore to "physics and chemistry"? Well, there is one science that does deal with these things - neuroscience. However, does neuroscientists also deal with qualia or consciousness? Many would say 'no'... Indeed (almost) by definition 'no'.

As it is, current science probably can't answer "what qualia are like" or "why we perceive them". Of course one trick here is to deny the existence of qualia and consciousness outright (as some philosophers and scientists have done). Alternatively, one can explain consciousness (though not qualia) in terms that are amenable to third-person (scientific) evaluation and tests (as Daniel Dennett does).

(Just a pedantic note here on Smolin's wording. If one believes in qualia, then we don't "perceive them". Instead, they are “part of us”, as Roger Scruton argues.)

It has just been said that Smolin doesn't tackle (or even mention) panpsychism, despite the fact that some of his positions seem very close to that philosophical position. So even though Smolin hints at insolubility for certain philosophical and scientific (hard) problems, he still has a problem with off-the-wall metaphysical theories.

So does Smolin apply the following stern points to panpsychism itself? He writes:

"It is easy to make stuff up, and the bookshelves are full of metaphysical proposals. But we want real knowledge, which means there must be a way to confirm a proposed answer. This limits us to science. If there's another route to reliable knowledge of the world besides science, I'm unlikely to take it..."

To be more specific. Are there ways to “confirm” panpsychism or intrinsic essence? In addition, if such things are beyond science, then they can't be (to use Smolin's own words) "another route to reliable knowledge of the world". Then again, panpsychists don't generally make epistemological claims. They make (speculative) metaphysical claims instead. So perhaps this is how both Smolin and pansychists escape this dilemma.

Smolin, as a theoretical physicist, puts his case very bluntly:

“What is the substance of the world? We think of matter as simple and inert, but we don't know anything about what matter really is. We know only how matter interacts.”

This passage partly reflects one written by the philosopher David Chalmers:

“[G]iven that physics ultimately deals in structural and dynamical properties, it seems that all physics will ever entail is more structure and dynamics, which will never entail the existence of experience.”

Certain things can be drawn out of the passage above. It can be said (as Smolin more or less does) that if “matter [is] simple and inert”, then that means that Smolin sees matter as substance. Yet matter is constituted by fermions, which are far from being “simple and inert”. That's unless Smolin is simply putting the position of the layperson.

Where we have substance, we also have Smolin's intrinsic essence. Smolin, however, says that all we have access to is “how matter interacts”. That ties in with Smolin's relationalism. It also ties in with ontic structural realism; and, perhaps more importantly, what many physicists themselves believe.

To return to Smolin's quote above: he seems to argue that we only know that which “interacts”. That is, the world only becomes concrete (as it were) when there are interactions. Thus we can now say that either Smolin's substances (or things) are the vehicles of those interactions. Yet we “don't know anything about” substances or things. Does that mean that substances (or things) “must go”? Not necessarily. Take Kant's warnings regarding talking about noumena. Despite his warnings, Kant still said much about noumena. That is, the fact that they are outside experience means that they must be accommodated by reason. Can the same be said about Smolin's substances or intrinsic essences?

Indeed Smolin seems to fuse (or conflate) the terms “substance” and “intrinsic essence”.

Are we playing games with technical terms here? Not necessarily. We can say that a substance is the essence of a given x. And x's essence can also be fleshed out in terms of its intrinsic properties. We can also see the terms “substance” and “intrinsic essence” as synonyms. Having said that, in analytic metaphysics it's no doubt the case that these terms can be firmly disentangled. The question is whether that analytic disentanglement gets us anywhere.

For example, Smolin's use of the word “substance” bears virtually no relation to Aristotle's use of that term. (Aristotle is the man when it comes to substance.) Indeed Smolin's substance doesn't even bear much of a similarity with the technical “substratum” either. But perhaps these technical nuances don't matter that much to this specific debate. After all, analytic metaphysicians probably don't know much about, say, spin networks or loop quantum gravity.

So let's go into Smolin's detail to see if we're only playing games with words here.

Smolin opposes his “essence” to “relationships and interactions”. Now surely it isn't a mere word-game to oppose relationships/interactions with substances/essences. The later are surely static and unchanging; whereas the the former evidently aren't.

“there's nothing real in the world apart from those properties defined by relationships and interactions”.

In The Trouble With Physics, Smolin also says that he doesn't believe that there are intrinsic properties/essences! Instead, as he puts it, “all properties are about relations between things”.

Thus if entities have intrinsic essences, then those essences will neither change over time nor can they be changed by other entities (or conditions). (Unless the entity concerned simply stops existing as the entity that it is.) According to Smolin, it's this ostensibly unchanging nature of intrinsic essences which makes them “absolute”. And that's why Smolin also uses the words “absolute properties”, by which he means:

Yet, at least prima facie, Smolin isn't happy with this eliminitivism either. He writes:

“Sometimes this idea seems compelling to me; at other times it seems absurd.”

Smolin then explains his worries:

“It does neatly get rid of the question of what things really are. But does it make sense for two things to have a relation – to interact – if they are nothing intrinsically?”

An immediate reply to that would be to say that “things” may interact and have relations with other things without their also having intrinsic essences. In simple terms, can't a given x interact without having an intrinsic essence? That is, any given x can still interact even though it is itself a thing that is always changing.

"We don't know what a rock really is, or an atom, or an electron. We can only observe how they interact with other things and thereby describe their relational properties."

"Perhaps everything has external and internal aspects. The external properties are those that science can capture and describe through interactions, in terms of relationships. The internal aspect is the intrinsic essence; it is the reality that is not expressible in the language of interactions and relations."

So is it that Smolin rejects eliminativism about intrinsic essences (as well as things); as, say, ontic structural realists do?

This means that ontic structural realists have it that things are mere placeholders used to plot relations and structures together.

Interestingly enough, Smolin does deny intrinsic essence to mathematics and numbers. (Perhaps that's not surprising when one bears in mind the nature of maths.) So it's worth while seeing what Smolin says (in a note) about maths:

This position is pure mathematical structuralism. And the implication is that structures don't give us the whole picture when it comes to things which aren't numbers/maths - such as rocks, atoms, consciousness and qualia. In fact Smolin's words can be rewritten thus:

Atoms, rocks, brains, etc. have intrinsic essences. These objects are not defined entirely by their place in a system of relations.