Searle & Patricia Churchland on Dualism in AI and Cognitive Science 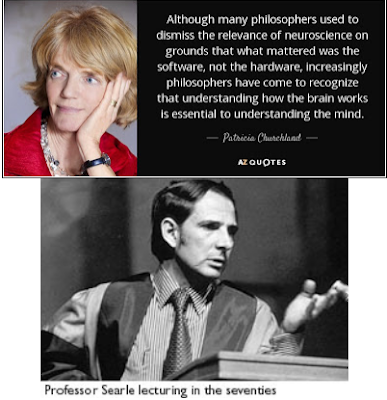 John Searle accuses many of those who accuse him of being a “dualist” of being... dualists. Bearing in mind the philosophical ideas discussed in the following, his stance isn't a surprise.

Searle's basic position on this is:

i) If Strong AI proponents, computationalists or functionalists, etc. ignore or play down the physical biology of brains; and, instead, focus exclusively on syntax, computations and functions (the form/role rather than the physical embodiment),
ii) then that will surely lead to some kind of dualism in which non-physical abstractions basically play the role of Descartes' non-physical and “non-extended” mind.

Or to use Searle's own words:

"If mental operations consist of computational operations on formal symbols, it follows that they have no interesting connection with the brain, and the only connection would be that the brain just happens to be one of the indefinitely many types of machines capable of instantiating the program. This form of dualism is not the traditional Cartesian variety that claims that there are two sorts of substances, but it is Cartesian in the sense that it insists that what is specifically mental about the brain has no intrinsic connection with the actual properties of the brain. This underlying dualism is masked from us by the fact that AI literature contains frequent fulminations against 'dualism'.”

Searle is noting the radical disjunction created between the actual physical reality of biological brains and how these philosophers and scientists explain and account for mind, consciousness and understanding.

Yet because those people just referred to (who're involved in artificial intelligence, cognitive science generally and the philosophy of mind) aren't committed to what used to be called a “Cartesian ego” (they don't even mention it), then the charge of “dualism” seems – superficially! - to be unwarranted. However, someone can be a dualist without being a Cartesian dualist. Or, more accurately, someone can be a dualist without that someone positing some kind of non-material substance formerly known as the Cartesian ego. However, just as the Cartesian ego is non-material, non-extended (or non-spatial) and perhaps also abstract; so too are the computations and the (as Searle puts it) “computational operations on formal symbols” which are much loved by those involved in AI, cognitive science and whatnot.

Churchland on Functionalism as Dualism

Unlike Searle, Patricia Churchland doesn't actually use the word “dualist” for her opponents; though she does say the following:

“Many philosophers who are materialists to the extent that they doubt the existence of soul-stuff nonetheless believe that psychology ought to be essentially autonomous from neuroscience, and that neuroscience will not contribute significantly to our understanding of perception, language use, thinking, problem solving, and (more generally) cognition.”

Put in Churchland's way, it seems like an extreme position. Basically, how could “materialists” (when it comes to the philosophy of mind and psychology) possibly ignore the brain?

It's one thing to say that

“psychology is distinct from neuroscience”.


It's another thing to say that psychology is

“neuroscience will not contribute significantly to our understanding” of cognition.


Sure, the division of labour idea is a good thing. However, to see the “autonomous” in “autonomous science” as being about complete and total independence is surely a bad idea. In fact it's almost like a physicist stressing the independence of physics from mathematics.

Churchland thinks that biology matters. In this she has the support of many others.

For example, the Nobel laureate Gerald Edelman says that the mind

“can only be understood from a biological standpoint, not through physics or computer science or other approaches that ignore the structure of the brain”.

In addition, you perhaps wouldn't ordinarily see Patricia Churchland and John Searle as being bedfellows; though in this issue they are. So it's worth quoting a long passage from Searle which neatly sums up some of the problems with non-biological theories of mind. He writes:

In a sense, then, if one says that biology matters, one is also saying that functions aren't everything (though not that functions are nothing). Indeed Churchland takes this position to its logical conclusion when she more or less argues that in order to build an artificial brain one would not only need to replicate its functions: one would also need to replicate everything physical about it.

Here again she has the backup of Searle. He writes:

Of course it can now be said that we can have an artificial mind without having an artificial brain. Nonetheless, isn't it precisely this position which many dispute (perhaps Churchland does too)?

In any case, to use Churchland's own words on this subject, she says that

“it may be that if we had a complete cognitive neurobiology we would find that to build a computer with the same capacities as the human brain, we had to use as structural elements things that behaved very like neurons”.

Churchland continues by saying that

“the artificial units would have to have both action potentials and graded potentials, and a full repertoire of synaptic modifiability, dendritic growth, and so forth”.

It gets even less promising for functionalism when Churchland says that

“for all we know now, to mimic nervous plasticity efficiently, we might have to mimic very closely even certain subcellular structures”.

Put that way, Churchland makes it sound as if an artificial mind (if not artificial intelligence) is still a pipe-dream.

In any case, Churchland sums up this immense problem by saying that

“we simply do not know at what level of organisation one can assume that the physical implementation can vary but the capacities will remain the same”.

Churchland puts the icing on the cake herself by stressing function. Or, more correctly, she stresses the functional levels which are often ignored by functionalists.

Take the cell or neuron. Churchland writes that

“even at the level of cellular research, one can view the cell as being the functional unit with a certain input-output profile, as having a specifiable dynamics, and as having a structural implementation in certain proteins and other subcellular structures”.

Basically, what's being said here is that in many ways what happens at the macro level of the mind-brain (in terms of inputs and outputs) also has an analogue at the cellular level. In other words, functionalists are concentrating on the higher levels at the expense of the lower levels.

Another way of putting this is to say what Churchland herself argues: that neuroscientists aren't ignoring functions at all. They are, instead, tackling biological functions, rather than abstract cognitive functions.

Posted by Paul Austin Murphy at 23:13