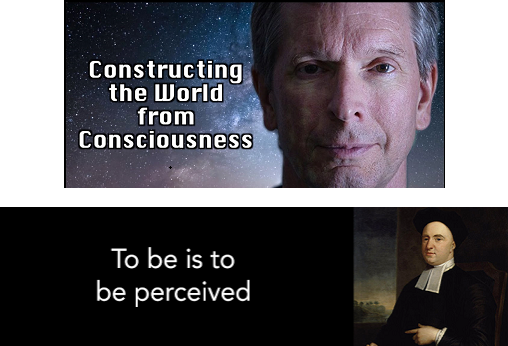 Donald Hoffman's philosophical position is called conscious realism. He opposes that position to panpsychism and to Kant's transcendental idealism.

In terms of panpsychism: there are clear distinctions between Hoffman's conscious realism and panpsychism. However, there are very clear and strong similarities too. (In one place, Hoffman does say that he accepts what he sees as one type of panpsychism – the one that's not, in his eyes, “dualist”.)

If we turn to Kant.

Hoffman hardly mentions it. Nonetheless, he does mention the Copenhagen interpretation of quantum mechanics favourably. In fact he uses it (in various places) in order to defend his own position of conscious realism. The thing is that Hoffman makes the Copenhagen interpretation seem idealist in nature. That said, he's hardly the first person to have done so (see here).

And on the subject of idealism.

This piece argues that Hoffman's conscious realism is a new-fangled take on idealism (i.e., idealism with mathematical and scientific knobs on it). Hoffman will deny this and he'll do so for various reasons. Primarily, Hoffman will do so because he does indeed believe that there's a “reality” out there. (He often uses the word “reality” positively – that there is a reality - many times; despite the fact that he's just written a book called The Case Against Reality.) Nonetheless, Hoffman also argues that we haven't got direct (or even indirect) access to that reality. Instead, we've only got access to the contents of consciousness. And that's still the case even if those contents belong to some kind of collective of consciousnesses (i.e., that of a collective of what Hoffman calls “conscious agents”).

Professor Donald Hoffman is explicit about his position on panpsychism. He writes:

“Conscious realism is not panpsychism, nor does it entail panpsychism.”

Hoffman then makes various distinctions between his own position of conscious realism and panpsychism. He states:

However, one part of Hoffman's story does seem to chime in with panpsychism. Take this passage:

Both panpsychists and conscious realists agree that consciousness (or experience) isn't an “emergent property” at all: it's been around since the Big Bang. Thus if consciousness has been with the universe (as it were) since the Beginning, then the issue of the emergence of consciousness becomes a non-problem.

To repeat. Hoffman's position can be seen as a take on panpsychism in that he states that “consciousness is fundamental”. (Three words which many panpsychists often use together - see here.) Panpsychism also rejects the emergence of consciousness from the physical and stresses, instead, that it's not the case that (to use Hoffman's words) it's “a latecomer in the evolutionary history of the universe” that “aris[es] from complex interactions of unconscious matter and fields”. Instead, panpsychists believe that there's consciousness (or there are phenomenal properties) all the way down to the particle and all the way up to the animal brain. Thus there's no need for (radical) emergence.

On the surface at least, Hoffman seems to take a very strong idealist position when he says that “brains and neurons do not exist unperceived”. (This is exactly what Bishop Berkeley argued; thought not, of course, about “brains and neurons”.) Now this isn't an expression of anti-realism because an anti-realist wouldn't say that any x doesn't exist “when unperceived”. He'd simply say that our perceptions “colour” what it is we take to exist. And there's no way around that.

All this displays the very common problem of conflating (or confusing) idealism and anti-realism.

Despite having just stated that, there is a strong sense in which one can derive idealist conclusions from anti-realist statements. That is:

i) If we describe things as “brains" and "neurons”,
iia) and those descriptions are contingent - and dependent – upon persons/observers, concepts, theories, etc.,
iii) then perhaps we may as well conclude that brains and neurons “do not exist unperceived”.

That is, brains and neurons (as well as other objects) don't exist until we describe/observe them. (This echos, to some extent at least, the debate which surrounded Niels Bohr's Copenhagen interpretation of quantum mechanics – see later section.) That's true enough. However, why embrace the idealist conclusion that everything that exists only does so in the minds of persons? That route leads to idealism, subjectivism, solipsism and woo.

In addition, what does Hoffman mean when he states that brains and neurons “have no causal power”? I ask that question because he doesn't explain it in the passages just quoted (though he may well do elsewhere). What's more, he concludes that this lack of causal power is “why we've never been able to boot up consciousness from neural activity”. So what does all that mean?

As Hoffman puts it about one “interpretation” of Kant:

“This interpretation of Kant precludes any science of the noumenal, for if we cannot describe the noumenal then we cannot build scientific theories of it.”

Yet Hoffman's own conscious realism isn't a scientific theory either. (Sure, it's clearly the case that Hoffman believes that it is.) He then says that

“[c]onscious realism, by contrast, offers a scientific theory of the noumenal, viz., a mathematical formulation of conscious agents and their dynamical interactions”.

Hoffman then expresses a position that isn't at odds with either anti-realism or Kant's transcendental idealism. He writes:

“Many interpretations of Kant have him claiming that the sun and planets, tables and chairs, are not mind-independent, but depend for their existence on our perception. With this claim of Kant, conscious realism and MUI theory agree. Of course many current theorists disagree.”

The wording in the above isn't quite right. Hoffman says that Kant believed that

“the sun and planets, tables and chairs, are not mind-independent, but depend for their existence on our perception”.

Surely it's best to say that some things (whatever they are) exist mind-independently. The problem is that they don't exist as the sun, planets, tables and chairs. That is, the fact that we see these things this way is a result of our contingent modes of “perception”; as well as our concepts, theories, languages, etc. However, this is still not idealism because Kant's noumena exist. In addition, they aren't the contents of consciousness. So this is transcendental idealism; not immaterialism or subjective idealism.

“Scientists believe that space, time, and objects exist even if they're not perceived. That's a fundamental assumption of most.”

So let's reiterate what's just been said above (i.e., before the subheading). Scientists (or at least some/most of them) do believe that objects exist even when not perceived. However, when they are perceived, then they're given (as it were) a determinate form – a form which is down to our contingent theories, experiments, perceptions/observations, concepts, languages, etc.

Secondly, not all - or even most - scientists “believe that space, time, and objects exist even if they're not perceived”. There have been (for many years) many physicists working on the non-existence of both space and time, for example. (Admittedly, that's a question of the very existence of space and time and it has little to do with our perceptions.) In addition, scientists aren't philosophers. Thus most scientists have little time for phrases like “objects exist even if they're not perceived”.

This leads us to the Copenhagen interpretation of quantum mechanics.

“For instance, [conscious realism] entails that DNA does not exist when it is not perceived. Something exists when we don’t look that causes us, when we do look, to perceive DNA, but, whatever that something is, it’s not DNA.”

Perhaps this is a bad example because at least DNA is a microphenomenon, if not a subatomic phenomenon. (Though DNA is determined by – and dependent upon - quantum phenomena.) Elsewhere, however, Hoffman applies exactly the same argument to brains (as a whole), cups, trees, and other everyday macro-objects. Now, to state the obvious, there's a vast difference between a electron (for example) and a tree (for example).

Another point is that Niels Bohr didn't embrace idealism. To put it simply. There's also a big difference between the stress on how we gain access to (as it were) reality and the idealist position that it's all about what goes on in one's head. (Or within what Hoffman deems to be a Collective Head.) Anti-realists accept that there is a mind-independent world. However, human beings only gain access to that world through their brains, consciousnesses, concepts, languages, etc. Idealism, on the other hand, seems to have it that literally everything is in the minds of subjects (or agents). And, if that's correct, then that puts idealism and anti-realism in radically different places. Yet, as is the case on so many occasions, anti-realism is basically seen as idealism (or, at the least, as a variety of idealism). Having said that, what Hoffman himself argues doesn't make this distinction clear. And, because of that, it can be argued that Hoffman's position is idealist rather than anti-realist.