Giulio Tononi on the Structure of Consciousness 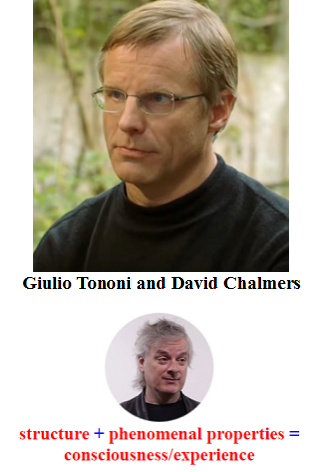 I first came across a relevant philosophical reference to the word “structure” (i.e., within an analysis of consciousness) in a work by David Chalmers. In his ‘Facing Up to the Hard Problem of Consciousness’ (1995), Chalmers tells us that

“we can use facts about neural processing of visual information to indirectly explain the structure of colour space”.

(Note the word “indirectly”; which, in what follows, proves to be important.)

Chalmers then says that “the structure of experience will also be explained”. Nonetheless, Chalmers adds:

“There are properties of experience, such as the intrinsic nature of a sensation of red, that cannot be fully captured in a structural description.”

Prima facie, it seems odd to say that “[c]onsciousness is structured”. It intuitively seems like a Rylean “category mistake”. That is, the American philosophers William James and Wilfrid Sellars (as well as many others) argued that consciousness is “grainless”. (James also referred to the “stream of consciousness”; which is a related idea.)

In simple terms, Giulio Tononi tells us that “consciousness has composition”. That means that consciousness (or a particular experience) is composed of different things. What things? Tononi says that these things include “color and shape”. These components “structure visual experience”. Indeed it’s this structure which “allows for [the] various distinctions” made in this piece.

What is an Experience?

Does Tononi try to make things a little too neat and tidy? This may especially be the case since he’s ostensibly attempting to be doing a (new) kind of phenomenology; even if that phenomenology is (eventually) anchored to neuroscience.

Similarly, what is “a whole visual scene”? Where or what are its boundaries? Indeed does it have boundaries?

An Experience of a Blue Book

Tononi says that “each experience is composed of multiple phenomenological distinctions, elementary or higher-order”. What does that mean? Tononi writes:

“For example, within one experience I may distinguish a book, a blue color, a blue book, the left side, a blue book on the left, and so on.”

This is tricky. What exactly do we do when we “distinguish a book, a blue color, a blue book, the left side, a blue book on the left”? Distinguishing x from y (or even x in itself) is surely a cognitive act. (An act of mental volition, as it were.) Do we make these discrete distinctions in experience — or in every experience? Do we distinguish at all?

Tononi makes a similarly case — one of a specific experience (or visual scene) not being capable of being reduced to its individual components — when he talks about “seeing a blue book”. This too is “irreducible” to “seeing a book without the color blue, plus the color blue without the book”. At first this is difficult to decipher and a little strange. The science writer John Horgan expresses this position when he says that “[e]xclusion [Tononi’s technical term] helps explain why we don’t experience consciousness as a jumble of mini-sensations”. True, when we experience a blue book, we don’t — cognitively — separate the blueness of the book from the book itself. The blue book is, therefore, a single package (or, in Tononi’s jargon, “irreducible”).

What must we conclude from this?

Despite this ostensible agreement with Tononi, what must we conclude from all this? Specifically, what is the blue-book experience’s relation to its “physical postulates”? How does the purity and grainlessness of that experience take us to Tononi’s physical postulates?

An Experience of a Blue Book in a Bookcase

Prima facie, Tononi seems to be making the same points about what he calls “exclusion” as he made earlier about another technical term of his — “integration”. This time, instead of the blueness of a book and that book making a single package, he now says that when we experience a bookcase which has a blue book within it, we don’t make an experiential distinction between that bookcase and that blue book.

Tononi also emphasises the “distinction blue/not blue”. More precisely, in this experience of a bookcase (rather than a blue book), that experience is

“one of which is a blue book, but I am not having an experience with less content — say, one lacking the phenomenal distinction blue/not blue, or colored/not colored”.

It can of course be said that an experience which makes “the phenomenal distinction blue/not blue” isn’t cognitive in nature. More precisely, that phenomenal distinction between blue and not blue isn’t cognitive at all — it’s “phenomenal” (or experiential). I simply see or experience that the aforesaid book is blue: I don’t experience that it’s not not-blue. That may mean that the phenomenal reality is pure or non-cognitive; though the analysis of this experience (which includes a distinction between blue and not blue) is evidently impure — it’s cognitive in nature. How could it not be? Tononi is breaking down the experience of a blue book (in a bookcase) into its constituents (as it were) after the fact. This isn’t done during the actual experience; only after.

An Experience of the Word ‘Because’

There are other justifications of Tononi’s position on integration. He cites the example of

“the experience of seeing the word ‘BECAUSE’ written in the middle of a blank page”.

Even if we don’t distinguish the ‘BE’ from the ‘CAUSE’ — what is that fact meant to tell us? Unless it tells us something about right- and left-eye vision working together. That is, the left eye (or the right-side of the brain) distinguishes the grapheme ‘BE’; and the right eye (or the left-side of the brain) distinguishes the grapheme ‘CAUSE’ — at one and the same time. Perhaps Tononi’s analysis is shown to be true by the neurophysiology that’s responsible for such grainlessness. But would that be an analysis of a phenomenological experience of the word ‘BECAUSE’?

The Speed and Length of an Experience

The axiom of exclusion includes some pretty bizarre properties. True, they’re properties which exclude other properties. Thus if “my experience flows at a particular speed”, then it can’t flow at another speed. Tononi even cites a speed (or, at the least, a possible speed) when he says that “each experience encompassing say a hundred milliseconds or so”. Is Tononi mixing up (or fusing) speed and length here? For example, say that one experiences a bus moving at 30 miles-an-hour for two minutes. Here the speed and the length that speed is maintained are two different things; though, in this case, they’re connected to one another.

How are these speeds measured? I doubt that they’re measured phenomenologically. Thus do neuroscientists, psychologists or cognitive scientists measure them? If so, how do they do so? And if the neuroscientist (or cognitive scientist) has to tell us the speed and length of an experience, then surely this isn’t phenomenological data. Yet Tononi (or Integrated Information Theory) is supposed to move from the phenomenology (or the “axioms of consciousness”) to the the physical postulates. Of course it may be the case that Tononi’s IIT fuses phenomenological data with neuroscientific data at such points. Though even if that’s the case, it can’t be (strictly speaking) a journey from consciousness (at time t) to the physical (at time t1).

Many people have heard of the binding problem.

Tononi claims (or does he?) that he moves from consciousness to the physical when dealing with the structure of consciousness. In terms of structure, this concerns, for example, the fact that a “simple experience like viewing a cue ball unites different elements such as color, shape, and size”. (We can also call this “the unity of conscious experience”.) Thus “any theory of consciousness will need to make sense of how this happens”. True; though surely only neurophysiology can answer this question; not a phenomenological analysis of consciousness (e.g., the analysis of an experiene of a cue ball).

How can the binding problem be solved in an a priori manner? Yet this is surely the way a phenomenological analysis would need to proceed. That is, we’re meant (in IIT) to move from the axioms of consciousness — as well as from the structure of experience — to physical postulates. It seems, however, that when it comes to the binding problem, we would need to move in the opposite direction — from neurophysiology to consciousness.

However, the direction of the arrow may not matter that much — or at all. It may not matter if we move from consciousness to the physical or from the physical to consciousness. What matters is that both consciousness (specifically phenomenology) and the physical (or the brain) are included in the analysis. Though that would mean that we don’t have a pure phenomenology here. Perhaps that doesn’t matter either. Tononi, after all, doesn’t claim to be a new Edmund Husserl or even that he’s a phenomenologist; just as he doesn’t claim to be a Cartesian when he talks about the “given nature of the axioms of consciousness”. What he does say is that both phenomenological analysis and an acceptance of the Cartesian givens (i.e., axioms) — i.e., not only neuroscience — are important for any theory of consciousness. Some would say that this is evidently so.

Giulio Tononi’s prose style doesn’t help us here. It’s highly technical and, well, a little lifeless. (At least in the pieces I’ve relied on.) He doesn’t make much of an effort to simplify what it is he’s saying. Perhaps that’s not required of academic works.

He doesn’t seem to offer arguments either. Instead, he makes statements. True, arguments may have led to his statements; though where does that leave the layman? The same is also true of Tononi when seen on video or giving a seminar. He makes lots of statements and offers very few arguments.

John Horgan (mentioned above) also takes this position. He says that “[o]ne challenge posed by IIT is obscurity”. Indeed, according to Horgan, Tononi “acknowledged that IIT takes a while to ‘seep in’”. Thus he concludes that “[p]opular accounts usually leave me wondering what I’m missing”. That statement doesn’t seem to be correctly articulated, however. That is, the academic prose on IIT is obscure; though the popular accounts “leave [us] wondering what [we’re] missing”.