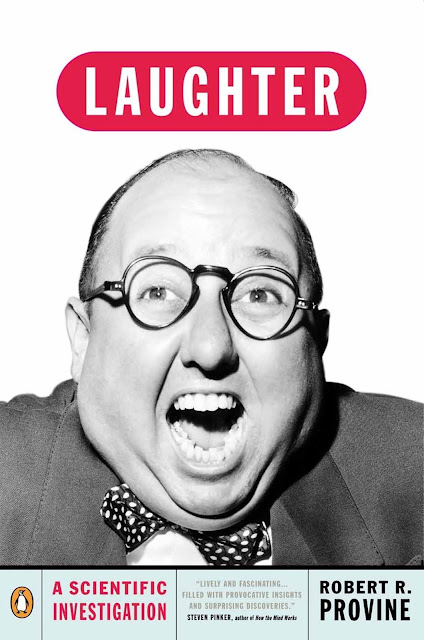 This short essay isn’t really about laughing. It’s about behaviourist explanations of all sorts of different human actions. It’s just that Robert R. Provine is an expert on laughing and he chose that phenomenon to concentrate on.

Is Spontaneous Laugher an Argument for Behaviourism?

Neurobiologist and professor of psychology Robert R. Provine argues — no doubt correctly - that laughing isn’t under our control. However, he concludes that our explanations for why we laugh are “usually wrong”. He even describes them as “confabulations”. Or as “honest but flawed attempts to explain one’s actions”.

That seems to be a false conclusion.

Surely if someone says something funny, and I laugh at it, then even if my laughter is automatic (i.e., not under my consciousness control), then it still doesn’t follow from this that my saying that his joke caused me to laugh is false. Why can’t my automatic response be explained as a reaction to the joke - even if it is automatic?

Is Provine’s position a resurrection of radical behaviourism?

Again, Provine may be correct to argue that “subjects incorrectly presume that laughing is a choice under conscious control”. Sure. However, why does that also mean that saying that I laughed because “she did something funny” (Provine’s example) is a “confabulation”? The laugher was automatic; yet still a response to this person saying something funny.

So because laughing is automatic, Provine concludes that we can’t give a true reason for our laughing. Does that simply mean that we don’t know the unconscious neurobiology (Provine’s other expertise), brain mechanisms, etc. which subserve our laughing (more of which in a moment)?

One other reason Provine gives for this is that when people are asked “to laugh on command, most subjects couldn’t do so”. We can accept that possibility too. Nonetheless, why does it follow from this that our giving a reason for laughing is a confabulation? The joke made us laugh; yet the laughing wasn’t under our control. So?

All this boils down to Provine emphasising unconscious (brain) mechanisms.

Perhaps Provine isn’t a behaviourist. So he’s no doubt correct to argue that “we vastly overestimate the amount of time we are aware of our actions”. However, none of that should lead us to accept his thesis that our reasons for laughing are false. That simply doesn’t follow.

Now it can be provisionally accepted that Provine isn’t an old-style behaviourist (or, alternatively, a denier of consciousness) because he happily limits his position to the following claim:

“The argument is not that we lack consciousness but that we overestimate the conscious control of behaviour.”

Yet perhaps the old-style behaviourists (or some of them) just alluded to might have put the situation that way too. They too might have said this:

Consciousness exists, sure; it’s just that it’s not needed in science precisely because we overestimate the conscious control of behaviour.

In other words, when we explain our behaviour (as in the laughing example), we don’t really know what we’re talking about. Only an observer, a third person or a scientist (like Provine) can know the real sources (or causes) of our behaviour.

Then again, if Provine were to say that “consciousness lies”, then that would be a tacit acceptance that consciousness exists. That, therefore, is a step beyond what some old-style behaviourists might have accepted…

Provine also fleshes out his position by offering a classical position on scientific theories.

Provine claims that his own theory (i.e., we don’t know what causes us to laugh or what causes us to do many of the things we do because they’re out of our “conscious control”) “makes the fewest assumptions”. And, as scientists often tell us, simplicity is a virtue in science (see here).

The complex theory, on the other hand, is an example of what Provine calls the “philosopher’s disease” of

“the inappropriate attribution of rational, conscious control over process that may be irrational and unconscious”.

For example, I’ve mentioned scientific behaviourism and that some philosophers of the first half of the 20th century were the fiercest adherents of various forms of behaviourism: from Ludwig Wittgenstein (at least at one point in his career) and Gilbert Ryle to the logical positivists. Indeed many philosophers of the second half of the 20th century were behaviourists too. Not only that: even when they weren’t (strictly speaking) behaviourists, some philosophers strongly played down consciousness. Indeed other philosophers rejected it entirely! So, being a psychologist and neuroscientist, Provine clearly hasn’t had the time to read much — or indeed any — 20th and 21st century philosophy.

“complex social order of bees, ants, and termites documents what can be achieved with little if any conscious control”.

Yes indeed! That said, it depends on what Provine wants his readers to conclude from this (i.e., that laughter doesn’t need “any conscious control”). What about other aspects of what we do take to be conscious action? Are we confabulating about them too? It can be supposed that it will depend on examples. And because in this piece Provine only gives the example of laughing (which he has studied in much detail), it’s hard to extrapolate from that. Then again, it can be argued that he still makes mistakes in logical reasoning even if his scientific data is perfectly correct.

Another of Provine’s arguments — or scientific claims — is that a

“neurological process that governs human behaviour [is] inaccessible to introspection”.

Provine also makes the obvious point that “we are not conscious of our state of unconsciousness”. Here again there’s a logical mistake being made by Provine.

Of course we don’t have introspective access to neuronal (or brain) processes. Yet it doesn’t follow from that that we don’t have introspective awareness of our actions. That’s like saying that because we aren’t fully aware of the internal mechanisms of a coke machine, then we can’t know that when we put money in and press the correct buttons, a coke can will be delivered.

We don’t need to know all — or perhaps even any — of the internal mechanisms of a coke machine. Similarly with our own brains. Nonetheless, when we put money in a coke machine, then we know what usually happens. Similarly, when we decide to do something: we can be in control of what we do regardless of our ignorance of the brain mechanisms which subserve such conscious actions.

All this also partly depends on what exactly Provine means by the word “introspection”. How strongly does he take that word? This is asked because introspection was an important aspect of old-style philosophy of mind in the 19th and 18th centuries and before. Nonetheless, philosophers are much more careful nowadays when they use that word.

Indeed in the first of the 20th century Martin Heidegger and Gilbert Ryle made a distinction between “knowing how” and “knowing that”. The latter requires conscious linguistic expression; whereas it’s argued that the former simply requires “skill”. Regardless of the intricacies of this distinction, both knowing how and knowing that require conscious awareness.

When you hammer with a hammer (Heidegger’s own well-known example) you need to be aware of the hammer even if you aren’t expressing (vocally or sub-vocally) sentences about that hammering. Now is that hammering the same as Provine’s spontaneous laughing? Surely not. There’s nothing spontaneous about picking up a hammer to hammer in a nail and even to carry on hammering. It’s not (in Heidegger’s words) “intellectualist”. But it’s not the equivalent of a spontaneous laugh either. You can’t control laughing. Clearly you can and must control your hammering.

Of course much of this — at least partly — depends on any further examples (i.e., other than the laughing) which Robert R. Provine has in mind when he advances his (what I take to be) neo-behaviourist position.

This piece is a response to the book What We Believe but Cannot Prove, pages 147 to 149.

Posted by Paul Austin Murphy at 23:38