Comments on Frege's Modes of Presentation 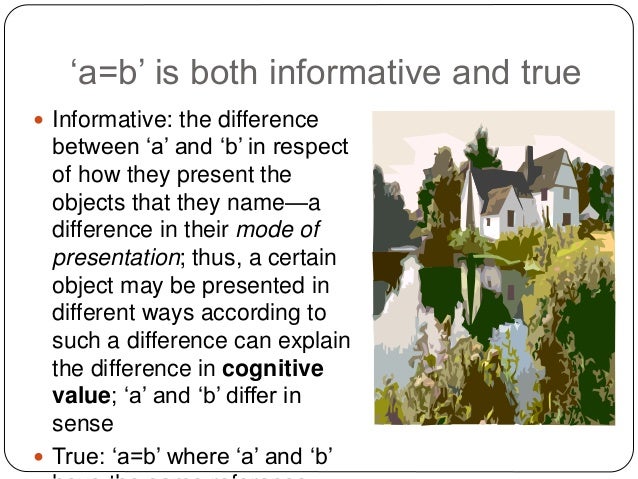 J.S. Mill believed that the meanings of singular terms were their denotations. Denotations are usually seen as objects of some description. Therefore any proposition which had a term whose meaning was its denotation would literally(?) have an object within it.


Thus Gottlob Frege argued that meanings can't be denotations. Instead of objects being in propositions, Frege suggested that “different ways of thinking” of an object are contained within propositions. Thus if a belief (or desire) can't literally contain the object of that belief (or desire), then it must contain “specific ways of thinking” of that object. That is, we shouldn’t mix up the ontology of objects with propositional structure and meaning. They belong to different ontological worlds.


Similarly, ways of thinking can't literally contain objects within them and neither do minds generally. It followed, for Frege, that what he called “sense” had to be distinguished from what many call “reference” or “denotation”. (Fregean) senses therefore determine references. They determine the ways in which the referents are thought about. Thus senses are “modes of presentation” of objects; not the objects themselves. Indeed we have no access to an object other than via a mode of presentation or a sense.


Think about what the contrary would entail.


It would mean that the object itself would be in the proposition or in its linguistic expression. That can't possibly be the case. Propositions are abstract entities (according to Frege); whereas objects are mainly concrete. An abstraction can't contain something in concreto.


The Individuation of Objects


In terms of the modes of presentation of an object, it can also be said that a criterion of identity must come along with a “principle of unity”. In addition, an object must have some kind of temporal longevity if it's to be deemed an object in the first place.


How can an object have temporal longevity?


Why should an object have a single criterion of identity? Why not many criteria?


This is where we depart from Frege and from many other philosophers.


Perhaps it all depends on the modes of presentation of that object.


People with different beliefs - or different agglomerations of knowledge - will individuate the very same object in different ways. We could of course have a God’s eye view of an object. Wouldn’t that view involve an infinite conjunction of properties and relations which belong to the scrutinised object? Alternatively, perhaps a God’s eye view of an object would entail an infinite disjunction of properties instead. That is, an infinite set of possible characterisations or individuations of the object. Mortal individuaters can't of course use infinite conjunctions or infinite disjunctions. Mere mortals can't even comprehend them. Thus a God’s eye view of the object at hand would only be of use to the person with God’s eye – viz., God himself.

Posted by Paul Austin Murphy at 06:33