Do philosophy students use more drugs than other students? 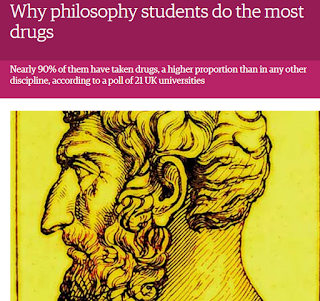 The Guardian journalist, Stuart Jeffries, opened his piece ('Why philosophy students do the most drugs') with these words:

“The Tab's [“... a university news network run by students who like being first”] survey of more than 5,000 students at 21 British universities reveals that 87% of philosophers polled had taken drugs, compared with 57% of medical students.”

Isn't this just a case of philosophy students compared to a single other group of students – medical students? So what about, say, drama, politics or sociology students? Who knows, perhaps this journalist chose medical students precisely because their figure for drug-use is so low. Nonetheless, the article's sub-heading does state the following:

“Nearly 90% of them [philosophy students] have taken drugs, a higher proportion than in any other discipline, according to a poll of 21 UK universities.”

However, these figures aren't actually backed up in the article itself. This isn't helped by the fact that the Guardian link to The Tab article/survey is dead. And the only relevant article (from The Tab) I could find is called 'Revealed: Which uni takes the most drugs'.

Take this jump from the word “philosophers” (presumably he means philosophy students) to the word “students”:

“Perhaps James's drug experimenting is inspiring today's philosophers: 45% of students polled claimed to have taken laughing gas. Or perhaps not – 68% had taken cannabis.”

Mr Jeffries also tells us that an Oxford maths student took MDMA, ketamine and laughing gas, and said: "I thought I was Godzilla." So what? That could have been true of any student and indeed of any young person.

Jeffries himself says that the research on this is rubbish (not his own word). For example, he writes:

“Until a cross-referencing of which types of students favour what kind of drugs, we are lost in a world of diverting speculation.”

“The Tab's editors, sensibly, say the survey should be taken with a pinch of salt since respondents are self-selecting”.

Though he doesn't tell us why he personally chose to compare philosophy students to medical students. He writes:

“Why this discrepancy? Is it because philosophy is easier than medicine and thus offers more recreational downtime? Really? Is grasping the Kantian noumenon less demanding than dissecting corpses?”

He does compare students with each other; though not with philosophy students (with the exception, as I said, of medical students). In addition, no figures are given. For example, he asks: “Why would a higher proportion of business administration students than lawyers claim to be drug users?”

So why did Jeffries single out philosophy students at all? There's no clear evidence in this piece why he should have done so. (Other than the possible fact that he may be vaguely interested in philosophy.)

Being a journalist, Stuart Jeffries also tries too hard to be hip and funny. For example, what the hell does the following mean? -

“Another theory is that philosophy – more than any other intellectual discipline (with the possible exception of a level three plumbing NVQ) – requires one to recalibrate the portals of one's consciousness in order to get one's intellectual freak on.”

Sorry for being a straight; though I can make neither head nor tail of that.

This is bad journalism and even worse philosophy. He also writes:

Really? I never knew that William James took nitrous oxide1. I doubt that many students do either – except for William James aficionados. However, James did report this - according to Stuart Jeffries - in his The Varieties of Religious Experience. Indeed this drug helped "stimulate the mystical consciousness to an extraordinary degree".

And why would a single philosopher taking drugs inspire any student of philosophy anyway? If William James had eaten shit, would that inspire philosophy students to also eat shit? (I have to admit, however, that shit isn't "psychoactive" - at least as far as I know.)

Of course because Jeffries is talking about philosophy, then he simply must mention ancient Greece. And, yes, of course, there's a drug link here. He tells us that the

Perhaps many other educated (or well-off) Greeks also took tetrapharmakos or other mind-stimulating drugs. Nonetheless, this writer ties taking tetrapharmakos with ataraxia (initially a largely Epicurean term) - which is “freedom from worry and distress”.

Again, Stuart Jeffries can't have been serious when he wrote

“if you want to understand Hegel or know what it's like to be a bat or Godzilla, try laughing gas”.

Was that statement just a joke without philosophical or even psychological content? If yes, then I may be wrong to get on my high horse. Perhaps the entire article is a joke. Indeed Stuart Jeffries might have written it while under the influence of nitrous oxide.

I myself have taken (psychoactive) drugs. I came to realise that what I produced under the influence of such drugs seemed to be good – or sometimes even great/original – at the time; though rarely the morning after!

With cannabis and LSD/mushrooms, I found I could improvise easily and write poems and philosophise. However, I couldn't be bothered with form and construction. It was quite literally all “free improvisation” (i.e., not just when it came to music). Sometimes it was okay. Often it wasn't. Under the influence I didn't have the discipline to compose a musical piece on paper. I never wrote a poem or a philosophy piece which was both structured and detailed either. Nonetheless, I'm still sure - even today - that I had some insights. Drugs also helped me “look at things in a different way”. Again, sometimes these insights were exaggerated while under the influence; though that wasn't always the case.

As for amphetamines, they proved to be the most constructive or effective for me personally. That was in the simple sense that when I was under the influence of amphetamines I could indeed be bothered with form and detail. In other words, I could concentrate on a single issue (or subject) and analyse it.

In terms of musical improvisation on LSD/mushrooms and cannabis, you can achieve a heightened state of both relaxation and concentration on these drugs which is rare in a sober state. Sometime that resulted in decent work. Often it didn't. (That concentration is less analytical than it is under amphetamines and is thus more akin - I suppose! - to a “spiritual state”.)

As ever with drug-use, it depends on the person who's taking the drugs as well as on the kind of drug taken. If the drug-user is already musically literate, artistic, mathematically inclined or whatever, then he may well produce good stuff within these domains. If he isn't, then he'll probably come up with crap.


1 I found these little gems in Bill Bryson's A Short History of Nearly Everything:

“In the early 1800s there arose in England a fashion for inhaling nitrous oxide, or laughing gas, after it was discovered that its use “was attended by a highly pleasurable thrilling.” For the next half century it would be the drug of choice for young people. One learned body, the Askesian Society, was for a time devoted to little else. Theaters put on “laughing gas evenings” where volunteers could refresh themselves with a robust inhalation and then entertain the audience with their comical staggerings.”

And later in the same book:

“Humphrey Davy [the professor of chemistry] discovered a dozen elements, a fifth of the known total of his day. Davy might have done far more, but unfortunately as a young man he developed an abiding attachments to the buoyant pleasures of nitrous oxide. He grew so attached to the gas that he drew on it (literally) three of four times a day. Eventually, in 1829, it is thought to have killed him.”

Posted by Paul Austin Murphy at 21:36