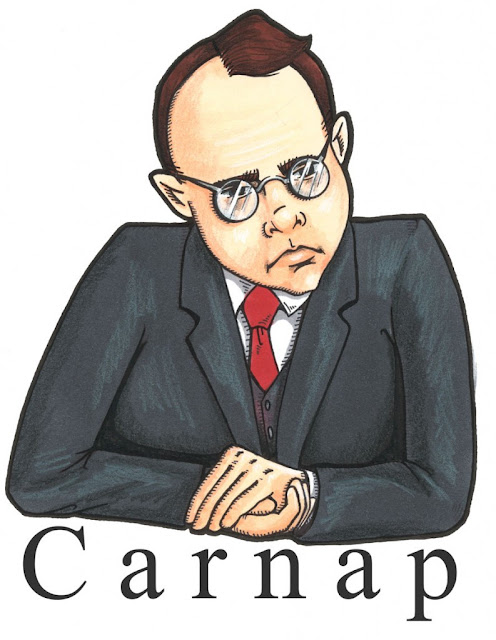 First things first. The technical terms used in this short and simplified piece will be somewhat controversial. The main reason for this is that many philosophers tend to invent their own terms or use old terms in new ways. In addition, even a neologism can still be very closely related to previous words or concepts. Thus we have “sense”, “intension”, “reference”, “denotation”, etc. used in different ways by different philosophers. So it’s often merely — or at least partly — a case of (to use Derrida’s term) “sign-substitutions” in which the new “signs” hardly differ from the substituted ones — at least not in important ways. And then there’s always the (fairly) new kids on the block — such as David Chalmers’ “primary intension” and “secondary intension” (in his two-dimensional semantics).

That said, all these different terms do refer to different concepts or functions and there’s no claim in the following that they’re all (really) identical.

The German philosopher Rudolf Carnap (1891–1970) believed that an expression (as it were) means what it means because it possesses both an extension and an intension (alternatively, a reference to a class and a sense). He believed that this approach would effectively bring the meanings of expressions down to earth and away from abstracta and/or “private” mental entities. Extensions are, after all, collections of concrete objects and intensions are the means to (as it were) get at those extensions (or at the objects within those extensions). That means that concrete objects (or collections of such objects) are important when it comes to extracting the meanings from expressions.

In much of the traditional picture, it was either abstract objects or private mental entities which fundamentally determined the meanings of expressions. Of course Carnap still allowed for the existence and use of abstract intensions (that’s if if they are in fact abstract).

So did Carnap see intensions as concepts, predicates or properties?

“A is necessarily B."

Basically, traditionalists believed that this statement is about things; not about sentences or words. Thus Carnap — to paraphrase — offered this alternative:

“The expression ‘A is [necessarily] B’ states a semantic necessity.”

What’s necessary in the above isn’t the properties of things: it’s a property of the sentence itself (e.g., as is the case with analytic statements).

Thus the expression “A is B” implicitly (or elliptically) refers to prior expression which generate this further necessary statement. That means that necessity is either stipulated and/or conventional. In other words, it’s a property of the sentences and concepts we use (i.e., it is de dicto necessity): not the things we refer to with those sentences (i.e., de re necessity).

Thus, according to Carnap, modal logic is actually a branch of semantics. This means that necessity is generated (as it were) by the meanings or concepts which are themselves properties of the sentences which are taken to assert certain necessities about things. So if necessity were really a property of things and their properties, then it would be ontology (rather than semantics) which deals with such properties.

Carnap accepted analyticity. He saw analyticity primarily in terms of what he called “individual concepts”.

Thus Carnap explained necessity by way of analyticity. That is, in

both a and b are “concepts of the same individual”; not variables which stand in for concrete objects. So perhaps we should write the above in this way instead:

Thus if a and b are concepts (C) of — or for - the same individual, then we can create an analytic statement.

For example, in the often-used example

“All bachelors are unmarried men.”

the words “bachelors” and “unmarried men” both refer to (or denote) different concepts of the same set of individuals (i.e., they have the same extension). Thus, according to Carnap, modal contexts were really “disguised quotational contexts”. In other words, the sentence

i) “Bachelors are unmarried men.”

ii) “The sentence ‘Bachelors are unmarried men’ is analytic.”

Alternatively, we can used a conditional to get this point across:

However, that conditional above (in which ‘c’ means concept) doesn’t (really) capture the modal property necessity. Thus we can have a biconditional instead: