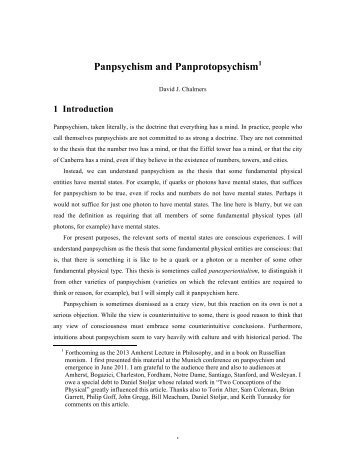 Consciousness is Fundamental and Elemental


It's possible that David Chalmers came to the speculative conclusion that experience/consciousness is elemental and omnipresent because only that could satisfactorily explain (at least in part) the reality of experience/consciousness. In other words, if consciousness/experience is everywhere at all times, that that makes consciousness easier to explain. Thus, according to Sandra Blakeslee, Chalmers argues that “scientists need to come up with new fundamental laws of nature”.

"My approach is to think of conscious experience itself as a fundamental property of the universe. Thus the world has two kinds of information, one physical, one experiential. The challenge is to make theoretical connections between physical processes and conscious experience.” [1996]


David Chalmers was also explicit about his position during a conference in 1994. This is how Barbara McKenna tells that story:

“Over the millennia scientists have concluded that there are a handful of elemental, irreducible ingredients in the universe--space, time, and mass, among them. At a national conference in 1994, philosopher David Chalmers proposed that consciousness also belongs on the list.” [1997]


At first glance it's hard to even comprehend how consciousness/experience is (or could be) an elemental and fundamental aspect of the universe, on par with space, time, mass, etc.


In any case, Chalmers comes clean as to how philosophically massive it would be if experience or 'information' were seen to be everywhere. Chalmers himself says that


“[o]nce a fundamental link between information and experience is on the table, the door is opened to some grander metaphysical speculation concerning the nature of the world”.


Thus we aren't just talking philosophy of mind here; or even about the nature of human consciousness. We're essentially talking about ontology or some “grander metaphysical speculation”.


What and Where is Experience?


Thus firstly Chalmers talks only in terms of processing. He tells us that “changes in experience correspond to changes in processing”. A process is itself seen as a functional property of the brain-mind. Thus if such mind-brain processes actually are experience (rather than causing experience), it follows that “any two functionally isomorphic systems must have the same sort of experiences”.


To recap. A mental process is a mental function and such functions determine – or actually are – experiences.


So what's being processed in the mind? According to Chalmers, it's “information” which also works as an “organizational property”.


In fact Chalmers does talk about information as if it's input and not itself an aspect of the mind-brain. That is, input-as-information goes in, and then processing (therefore experience) follows. That's the case because Chalmers himself says that “experience is much more widespread than we might have believed, as information is everywhere”.


To repeat. From the following, it would seem that “information processing” is experience because, to quote Chalmers in full, he says that

Chalmers also appears to make a strong distinction between minds and mental states. Every object or thing may not have a mind; though they may still have mental states. Or as Chalmers puts it:

Prima facie, it's hard to grasp the distinction between mental states and mind. That's not because I can't see the difference. It's because saying that a photon has a mental state is as problematic as saying that it has a mind.

“there is something it is like to be a quark or a photon or a member of some other fundamental physical type”. [2013]

From that one could say that photons can (or could) experience different qualia. Isn't it qualia, after all, that makes a mental state (or experience) “like something”?


Thus we've rejected minds and accepted mental states. And now it's said that some fundamental physical entities are conscious.


Firstly, what do the words “proto-experiential properties” mean? And how can we grasp the thought that such properties are “inside of the entities characterized by physics”?
Chalmers also introduces the term “phenomenal (or experiential) properties” . Qualia must constitute what it's like to be an object. Chalmers, on the other hand, says that

“phenomenal (or experiential) properties are properties characterizing what it is to be a conscious subject”.

It can now be said that the words “qualia” and “phenomenal properties” are virtual synonyms here since they appear to be playing the same role.


Either way, it's such qualia or phenomenal properties which problematise physicalism/materialism. After all, if we are physicalists then we must believe (as Chalmers puts it) that “all phenomenal truths [must be] grounded in microphysical truths”.


Chalmers, David. (2013) 'Panpsychism and Panprotopsychism'.
(2010) The Character of Consciousness.
Blakeslee, Sandra. (1996) 'The Conscious Mind Is Still Baffling to Experts of All Stripes'.

Posted by Paul Austin Murphy at 00:08