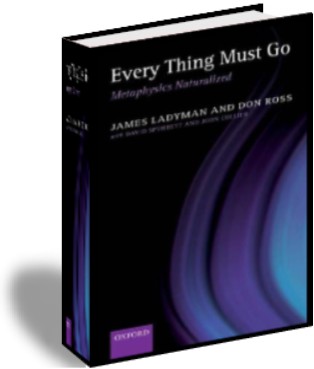 
Bertrand Russell puts the case for for what may be deemed a mathematical structural realism when he wrote the following:


That appears to be an admission that mathematics is used in physics because we don't know everything that is to be known about the object, condition, event, etc. under description or scrutiny. Mathematical equations and values are the mere bones of the physics. Mathematics only deals with structures; not with what have been called “intrinsic properties”. This position seems to be at odds, then, with the realism of James Ladyman, Don Ross and other contemporary ontic structural realists.


It's here that there are two options available. One, to become a kind of thing-eliminativist and say, “Every thing must go." Or two, one can adopt a quasi-Kantian line and say that there are things-in-themselves (or intrinsic properties); though the problem is that we don't know anything about them. Indeed, as with option one, we can eliminate "substances" or things-in-themselves from our ontology.


Russell then elaborates on his structural and mathematical ontic realism. He states the obvious point that “[p]hysics is mathematical”. And then says that when it comes to the “physical world” it's “only its mathematical properties” that we have access to. Such properties are all “we can discover” (163).


In one place you find Russell speaking about “point-instants” which seems to be a perfect example of ontic structural realism. Firstly he tell us that “we can define a point-instant in space-time as a group of events”. Then he he says that


It is clear that Russell has taken the idea of a “centre” omitting radiations from Werner Heisenberg. Russell tells us that


“Heisenberg regards a piece of matter as a centre from which radiations travel outward”.


These radiations constitute the realism of this picture in that “radiations are supposed really to occur”. However, the irrealism (as it were) about things (or about centres) is put when Russell argues that the matter at their centre is reduced to a mere mathematical fiction.


Russell puts what can be called the Kantian stance on these issues and problems. Basically, Russell believes that all we have are what he calls the “effects of a thing-in-itself”. Thus Russell comes to the conclusion (as contemporary ontic structural realists have done) that if we only have access to effects (or to external properties), then why not factor out that distinction between thing-in-itself (or intrinsic properties) and its effects (i.e., external properties).


We can now ask about those effects. What is left of the things-in-themselves? In terms of the science of this issue, Russell writes:


“We find that energy in various forms spreads outwards from various centres; we find also that such centres have a certain degree of persistence, though this persistence is not absolute...”


Prima facie, this seems like a simple substitution of the word "thing" (or "piece of matter") with the word "center". Instead of a thing “having a certain degree of persistence”, it's simply these physical centres which do so. Nonetheless, it can still be said that these centres are, effectively, things (or pieces of matter). In other words, are we simply debating the correct usage of words here?


Russell continues by expressing the basic science of an electron or proton and why it is that we take them to be things. Thus, in point of fact,


“the modern physicist faces cheerfully the possibility than an electron and a proton may mutually annihilate each other, and even suggests that this may be the main source of the radiant energy of the stars, because when it happens it makes an explosion”.


Thus firstly we discover that the electron and proton have some kind of mutual relation with one another. That alone will raise questions as to their ontological reality as separate entities. In other words, if two things - a and b - always have a necessary and “mutual” relation to one another, then what right have we to see them as distinct entities in the first place?


That later possibility is scientifically elaborated upon when Russell tells us “[w]hat can be asserted” about these matters. He writes:


“When energy radiates from a center, we can describe the laws of its radiation conveniently by imagining something in the centre, which we will call an electron or a proton according to circumstances, and for certain purposes it is convenient to regard this centre as persisting, i.e. as not a single point is spacetime but a series of such points, separated from each other by time-like intervals. All this, however, is only a convenient way of describing what happens elsewhere, namely the radiation of energy away from the centre. As to what goes on in the centre itself, if anything, physics is silent.” (165)


Whereas earlier I said that the word "centre" was being used as a substitute for the word "thing", now Russell speaks of '"spacetime points" instead. Thus even though Russell says that “what goes on in the centre itself, if anything, physics is silent”, he still feels comfortable talking about "spacetime points".

Posted by Paul Austin Murphy at 23:06