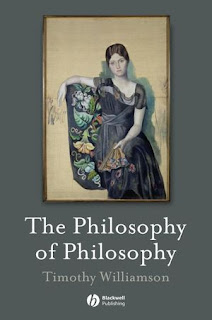 In basic terms, Hacker's critique is twofold. One, he doesn't really believe that The Philosophy of Philosophy is an example of the philosophy of philosophy. Two, he believes that Williamson - in parallel - pays too much attention to various disputes, subjects and problems which are firmly within the domain of analytic philosophy. Hacker's other main critique is, as one would imagine, that Williamson's criticisms of the “linguistic term” and “conceptual analysis” are both philosophically problematic and often historically and philosophically naïve - sometimes downright false.

Indeed Hacker seems to have a problem with just about every sentence in Williamson's The Philosophy of Philosophy. Hacker's relentless (if sometimes mild and subtle) sarcasm does grate after a bit. One is led to ask: Does Timothy Williamson really make so many fundamental schoolboy errors? (Perhaps Williamson once spilt Hacker's coffee in an Oxford college common room and he's never forgiven him.)

Matti Eklund sums up Timothy Williamson's The Philosophy of Philosophy in the broadest possible terms. He writes:

“In one way,Williamson is conservative: he wants to defend (analytic) philosophy pretty much as it has tended to be done. In another, he is radical: he wants to correct what he regards as common misconceptions of the enterprise of philosophy.”

P.M.S. Hacker, on the other hand, takes another angle and says that that metaphilosophy is about “the nature of philosophy and its methods”. Such a pursuit, according to Hacker, has “been little discussed by recent analytic philosophers of the new persuasion”. More precisely, Timothy Williamson involves himself in the “rethinking of philosophical methodology”. This “involves understanding, at an appropriate level of abstraction, how philosophy is actually done”. Yet despite that, Hacker doesn't think that's what Williamson does. Instead he covers subjects and problems which have been well trod in analytic philosophy.

Thus there's a difference between analysing different subjects and problems and philosophical methodology (or “understanding how philosophy is actually done”). For example, analysing (analytic) philosophy's various accounts of analytic statements and the a priori (as has been staple subjects for various analytic philosophers in the last 70 years or so) is not metaphilosophy or even methodology.

“We are promised insight, rigour and courageous precision, but what we get is tens of pages of reflection on the sentences ‘All vixens are vixens’ and ‘Vixens are female foxes’, coupled with the admonition that ‘impatience with the long haul of technical reflection is a form of shallowness’.”

Prima facie, Hacker is perfectly correct. This isn't even the analytic philosophy of philosophy. It's just plain analytic philosophy. It's of course possible to have a metaphilosophical position on - or critique of - the philosophy of “analytic statements” (if that's what they are). For example, one could question whether or not such statements impinge on extra-philosophical areas or whether they are truly analytic (as with Quine). Is that what Williamson does? Hacker doesn't think so. All we get, instead, is an expression of “how the current Wykeham Professor of Logic does philosophy”. Does that mean that Williamson doesn't even tackle philosophical methodology in a metaphilosophical way? Not according to Hacker, who says that

“[o]ne might expect a methodical investigation of how philosophy is actually done by the most eminent philosophers of the ages, or of the past age, or even just of the present age.”

Instead of that, “all we are shown is how the current Wykeham Professor of Logic does philosophy”. Of course one has to tackle philosophical subjects and problems in some way in order to see how philosophy is done. But seeing if the a priori is defeasible, or if metaphysical necessity is discovered a posteriori, isn't such a pursuit. I suppose that, in this case, we'd need to say how these subjects would be tackled in a metaphilosophical kind of way. And that's difficult! As soon as one attempts to do so, one seems to stop doing philosophy and start doing, for example, the history of philosophy or the sociology of philosophy. And these subjects are neither philosophy nor metaphilosophy. At least not on the reading of Nicholas Joll. He writes:

“We might want to deny the title ‘metaphilosophy’ to, say, various sociological studies of philosophy, and even, perhaps, to philosophical pedagogy (that is, to the subject of how philosophy is taught). On the other hand, we are inclined to count as metaphilosophical claims about, for instance, philosophy corrupting its students or about professionalization corrupting philosophy...”

Yet despite Hacker's criticisms (as well as what's just been written), Hacker does adumbrate on what seems to be Williamson's various metaphilosophical positions. Hacker writes:

“Three themes dominate the book. First, that it is false that the a priori methodology of philosophy is profoundly unlike the a posteriori methods of natural science; indeed that very distinction allegedly obscures underlying similarities. Second, that the difference in subject matter between philosophy and science is less deep than supposed; ‘In particular, few philosophical questions are conceptual questions in any distinctive sense’. Third, that much contemporary philosophy is vitiated by supposing that evidence in philosophy consists of intuitions, which successful theory must explain.”

Is a debate about the a priori and its relation to the “a posteriori methods of natural science” metaphilosophy or is it simply philosophy? Presumably the a priori method (if that's what it is) would need to have been distinguished from the a posteriori method from the very beginning. And that distinction is obviously philosophical. But is it metaphilosophical? If it is, then Plato, Hume, Kant and God knows who else were also metaphilosophers. In order to make a distinction between the a priori and the a posteriori it's the case that at least some kind of meta-position must have been taken. All philosophers will have needed to have taken some kind of meta position. Again, the problem is finding the purely meta in such philosophy.

Philosophy, the A Priori and Science

Williamson also makes a move from the “armchair” to what he says is “knowledge of truths about the external environment”. How does he make that move? Hacker says that “no examples of such knowledge are offered, and no explanation is given to render the ‘mays’ precise”.

One of Williamson's examples of a strong connection between science and philosophy certainly does seem bogus (as well as a little inane). Or, should I say, it does so (only) if we accept Hacker's account of that example. Hacker tells us that the

“fact that Galileo and Einstein engaged in thought experiments does not make metaphysics any more akin to science than to chess or cricket (in which one may also reflect on what would happen or would have happened if ...)”.

Needless to say, there is a connection being made here between the a priori (or at least the importance of the armchair) and the realities of scientific thinking. Yet surely any “thought experiments” that Galileo and Einstein engaged in about concrete empirical specifics - even if they led to general or universal laws – wouldn't have been examples of armchair philosophising or apriorising. (Hume and other empiricists have told us that even claims of universality and law always go beyond the empirical and the observational.) In addition, the fact that such scientists sometimes thought about things - and didn't always require experiments to do so - didn't make them armchair philosophers or apriorists. If that were the case, every one of us would be an armchair philosopher or an apriorist. And stating these armchair thoughts in the guise of conditionals or hypotheticals doesn't advance Williamson's case either. Here again it's something we all do; except, of course, for the fact that we don't use the word “conditionals” or “hypotheticals”.

Despite all the above, Hacker does admit that there is some metaphilosophy in The Philosophy of Philosophy. He tells us that Williamson “informs us” that philosophy is “an armchair science”. In addition:

“It consists of thinking, without any special interaction with the world beyond the armchair, such as measurement, observation or experiment would typically involve.”

Hacker's account of Williamson further stresses the latter's ostensible belief that philosophy isn't that different from other kinds of thought and, indeed, from science. Hacker writes:

Williamson again bridges the chasm between philosophy and science when he says that “[p]hilosophy, like any other science (including mathematics) [...] has evidence for its discoveries”.

Williamson then says that “philosophy is no more a linguistic or conceptual inquiry than physics”. Does that mean that philosophy both is and is not like science? Does it depend? Alternatively, philosophy can clearly be about “the world” or “the nature of reality” without it thereby being a science. (Williamson gives the following examples: “Contemporary metaphysics studies substances and essences, universals and particulars, space and time, possibility and necessity.”) And that's certainly true. Here again we can ask whether or not science can either confirm or disconfirm such world-directed philosophical/metaphysical statements. Or, alternatively - as with certain logical positivists - we can say that they're not amenable to scientific scrutiny at all because (as with the most extreme logical positivist position) world-directed philosophical claims are “meaningless”.

Hacker's review of Williamson's The Philosophy of Philosophy becomes even more explicit – indeed crashingly so! - when he concludes with the following words:

“The Philosophy of Philosophy fails to characterize the linguistic turn in analytic philosophy. It fails to explain why many of the greatest analytic philosophers thought philosophy to be a conceptual investigation... It holds that philosophy can discover truths about reality by reflection alone, but does not explain how. It holds that some philosophical truths are confirmable by experiments, but does not say which. It misrepresents the methodology of the empirical sciences and the differences between the sciences and philosophy. It has nothing whatsoever to say about most branches of philosophy.”

Yes, characterising the “linguistic turn” in broad and contextual terms would indeed be metaphilosophy. A philosophical analysis of some of its problems and assumptions wouldn't be. The same is true about “conceptual investigation”. For example, arguing that conceptual analysis alone doesn't do justice to “metaphysical reality” wouldn't be metaphilosophy... or would it?

Despite that final declamation against Williamson, Hacker does say that The Philosophy of Philosophy “does provide an adequate ‘self-image’ of the way Professor Williamson does philosophy”. And even that ostensible plaudit is, I believe, subtly sarcastic.

Posted by Paul Austin Murphy at 07:15