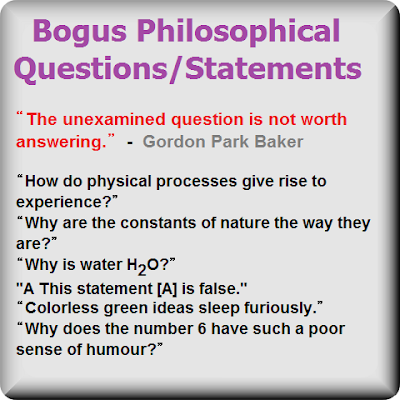 What I'll attempt to do in the following is summed up very well by the American-English philosopher Gordon Park Baker. In his 'φιλοσοφια: εικων και ειδος' (which can be found in Philosophy in Britain Today), Baker wrote:

“We should... make serious efforts at raising questions about the questions commonly viewed as being genuinely philosophical. Perhaps the proper answers to such questions are often, even if not always, further questions!”

All sorts of questions have been deemed to be profound, deep and worthy of serious thought. However, perhaps it's just as important - and indeed just as philosophical - to ask questions about these questions. Or as Gordon Baker puts it:

“The unexamined question is not worth answering.”

“To accept a question as making good sense and embark on building a philosophical theory to answer it is already to make the decisive step in the whole investigation.”

At the outset, however, it must be noted that what follows isn't a defence of a position that's similar to that which was once held by Russell, Wittgenstein or by the logical positivists. Nor is it a defence of some of the positions advanced by “ordinary-language philosophers” in the 1940s, 1950s and early 1960s.

That is, it's not being argued here that many everyday - and indeed philosophical - statements have a “logical” or “philosophical grammar” which somehow hides deep underneath them. Or at least it isn't part of my argument that the logical grammar of (possibly) bogus questions is hidden.

On the other hand, neither do argue that, as the late Wittgenstein put, “nothing is hidden”.

It's also the case that I don't have a problem with poetic philosophical statements. Take this two examples from Friedrich Nietzsche (both from Beyond Good and Evil):

“I obviously do everything to be 'hard to understand' myself.”

“The text has disappeared under the interpretation.”

Ironically, Wittgenstein himself certainly did see Nietzsche as a philosopher. Indeed it can be said (it often has been said) that many of the Wittgenstein's own statements or questions are poetic, gnomic or “mystical” in nature.

In addition, there's no need to use the word “nonsense” about most (or indeed any) of the questions or statements considered in the following piece. (Despite saying that, the word 'nonsense' wasn't used – by philosophers – in its everyday sense: it usually had a precise technical or philosophical meaning/usage.) For example, saying that a particular question simply assumes that there's an answer (or that a question can't be answered at all) doesn't seem to be a point about logical grammar or about nonsense...

There's an equivocation here because in Wittgenstein's Culture and Value (a selection from the philosopher's personal notes), he wrote the following:

"As long as there continues to be a verb 'to be' that looks as if it functions in the same way as 'to eat' ... people will keep stumbling over the same puzzling difficulties.”

Now who can have a problem with that? That position may not be entirely acceptable (as it stands); or it may simply be partial. However, if the question

are also asked, then there may well be a problem.

All sorts of questions can be asked. And two fundamental things are assumed when a question is asked:

In addition, another problem is summed up (again) by Gordon Baker:

“Questions, just as much as assertions, carry presuppositions.”

This is especially true in philosophy. The type of questions I primarily have in mind here are the following.

i) “Why does the physical give rise to consciousness?” (Or in David Chalmers' words: “How do physical processes give rise to experience?” )

ii) “Why are the constants of nature the way they are?” (Or: “Why do the laws of physics have the numerical values they do have?”)

Just because a question is grammatical and even makes (some kind of) sense, that doesn't mean that it's a philosophically (or otherwise) legitimate question.

“Why does the number 6 have such a poor sense of humour?”

Now that's a perfectly grammatical sentence. It even makes some kind of sense. (It does so – at least in part - precisely because it is grammatical.) However, in a philosophical and even commonsensical sense, it doesn't make... well, sense.

To back this up, let's use Noam Chomsky's well-known surreal sentence (though not itself a question). Namely:

All the words (as well as their concepts) in the question are “transparent” when taken individually. (That is, if words can ever be taken individually or outside of the “Fregean context” of a whole sentence.) More relevantly, the sentence itself is grammatically correct – and it may even be logically correct. (Chomsky said that it is “semantically nonsensical”.) However, isn't it also empirically, scientifically and even metaphysically nonsensical? (Hence Chomsky's semantic position.) Nonetheless, can't we still understand that statement?

Take these questions about Chomsky's sentence:

i) Can we conceive of that statement being true? (The word 'conceive' is often used by philosophers who make use of modal notions.)
ii) Do we need to conceive the statement's truth-conditions in order to understand the statement?
iii) Can we even conceive of a situation in which colorless green ideas sleep furiously?

Here it seems that grammatical (or even logical) correctness runs free of conceivability - not only of Chomsky's semantics. In other words, perhaps we don't - and can't - actually conceive of colorless green ideas sleeping furiously at all. Nonetheless, the sentence can still be understood simply because it's grammatical. Though all that, of course, depends on precisely what's meant by the word 'understand'!

“Why does everyone simply adore Anton Webern's Symphony Op. 21?”

That question is also perfectly grammatical. And it's certainly not surreal like the first question. However, the question is somewhat bogus because it simply assumes that everyone does love Webern's Symphony Op. 21. (Of course it's possible that they do.) So this is very much like this well-known question:

“When did you stop beating your wife?”

In other words, both questions beg the question (i.e., they "assume the [or an] initial point").

So the first question is rightfully deemed to be ridiculous. And the second question begs the question. 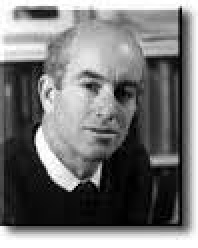 Indeed Wittgenstein did have things to say on the nature of many philosophical questions (both in his “early” and “late” periods). His position is partly summed up in this passage from Robert W. Angelo. (It contains a quote from Wittgenstein himself.) Thus:

“... nonsense in the form of a question is still nonsense. Which is to say that the question-sign... can only be rejected, not answered: 'What is undefined is without meaning; this is a grammatical remark.'...”

In other words, any question can be asked. And any question may be taken to be legitimate simply because it's grammatical and also because it makes a modicum of sense (i.e., though only if that last word is used very loosely). All the examples given so far may fit these categories.

So take this question:

Or what about this well-respected (i.e., by logicians and philosophers) statement? -

A: This statement [A] is false.

Another good way of summing up the problem with these possibly-bogus questions (or statements) is also cited by Gordon Baker. He writes:

“Questions, just as much as assertions, carry presuppositions. To pose a particular question is to take things for granted, to put some things beyond question or doubt, to treat some things as matters of course...”

As stated before, one obvious “presupposition” to a question is that there's an answer to it; or at least a possible answer.

Now take a seemingly silly question which was first mentioned by Bertrand Russell. (This question is sometimes used to flesh-out issues within the realism/anti-realism debate.) Here's my (very slight) paraphrase of the question:

“Is there a china teapot between the Earth and Mars which is revolving about the sun in an elliptical orbit?”

The presupposition here might have been that we - even if only in principle - could discover the truth or falsity of this statement. (Though this wasn't Russell's point.) Does that also work for Chomsky's earlier statement (i.e., “Colorless green ideas sleep furiously”)?

It's possible that we could at least attempt to find an answer to this tea-pot question. However (to state the obvious), we'd quickly find out there are no green ideas. Therefore the question as to whether or not green ideas “sleep furiously” can't (or shouldn't) even arise. In other words, what's being presupposed here is there are green ideas.

Can the same question also be asked of this question from David Chalmers? Namely:

“Why should physical processing give rise to a rich inner life at all?”

To repeat: a (possible) answer is being presupposed in both cases. That is, the very asking of these questions means that the questioners must assume that there are answers – at least answers in principle.

To use the words of Baker again. Aren't these questioners “taking certain things for granted”? That is, aren't they primarily taking for granted that their questions are legitimate and that there are answers? Moreover, aren't these questioners also “put[ting] some things beyond question or doubt”; as well as “treat[ing] some things as matters of course”?

[All the possibly-bogus questions just mentioned will be tackled in greater detail in the later parts of this piece.]

Posted by Paul Austin Murphy at 21:14