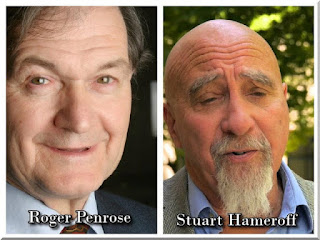 As a non-scientist, I've often little idea if statements or arguments about quantum mechanics and its influence on the brain and consciousness are true. I sometimes understand what's being said. However, that understanding alone doesn't in and of itself tell me whether or not what's being said is true (or correct). A scientist may tell me that p is true or correct; though is that enough?

So what's the nature of Penrose's new physics?

How does this apply to the brain and consciousness?

“The very existence of solid bodies, the strengths and physical properties of materials, the nature of chemistry, the colours of substances, the phenomena of freezing and boiling, the reliability of inheritance — these, and many other familiar properties, require the quantum theory for their explanations.”

True, these “solid bodies”, etc. may “require the quantum theory for their explanations”; though that doesn't automatically mean that they have effects which can be observed or which are in any way substantive. Thus all this doesn't also mean that the impact of quantum mechanics on the macro-world is important or even mildly important. It simply means that quantum mechanics is a part of the whole picture. So, in the sense of supplying a complete picture - then, yes, of course quantum theory will be required. However, this question still remains:


In what precise ways do quantum happenings effect macro-objects, macro-events and macro-conditions?

Despite this (possibly) quasi/neo-Kantian or quasi/neo-phenomenalist account of the nature of quantum happenings on Penrose's cricket balls, the point may still be missed. (Penrose himself mentions the lack of quantum-mechanical effects on cricket balls.)

In any case, as a possible consequence of quantum-mechanical effects on macro-objects, macro-events and macro-conditions, Penrose finishes off by saying something that was - perhaps - spurring him on all along. Thus:

“Perhaps, also, the phenomenon of consciousness is something that cannot be understood in entirely classical terms. Perhaps our minds are qualities rooted in some strange and wonderful feature of those physical laws which actually govern the world we inhabit... Perhaps, in some sense, this is ‘why’ we, as sentient beings, must live in a quantum world, rather than an entirely classical one... Might a quantum world be required so that thinking, perceiving creatures, such as ourselves, can be constructed from its substance?”

Is it the case that microtubules, quantum gravity and quantum mechanics provide the answers to all Penrose's questions about consciousness?

Roger Penrose puts his position on quantum gravity and quantum mechanics in the following way:

More relevantly to our discussion, Penrose was and is still is deeply aware – and evidently so - of the arguments against his position as it's applied to the brain and consciousness. Indeed when he wrote The Emperor's New Mind in 1990, he didn't have a position on microtubules. (Microtubules aren't mentioned in this well-known book.) Even neurons and neurotransmitters only get four mentions.

This is what Penrose also had to say about the opposition's position on the brain and quantum mechanics:

“... they would argue that on a scale relevant to our brains the physical effects of any quantum gravity must be totally insignificant! They would say (very reasonably) that although such physical effects might indeed be important at the absurdly tiny distance scale known as the Planck length — which is
10 35 m, some 100000000000000000000 times smaller than the size of the tiniest subatomic particle — these effects should have no direct relevance whatever to phenomena at the far far larger ‘ordinary’ scales of, say, down only to 10 12 m, where the chemical or electrical processes that are important to brain activity hold sway.”

Indeed Penrose went further by saying that his detractors would say that not even ordinary gravity (as it were) could affect the brain. Thus:

“Indeed, even classical (i.e. non-quantum) gravity has almost no influence on these electrical and chemical activities.”

Penrose concludes with the following sceptical words (as offered by his opponents):

“If classical gravity is of no consequence, then how on earth could any tiny ‘quantum correction’ to the classical theory make any difference at all? Moreover, since deviations from quantum theory have never been observed, it would seem to be even more unreasonable to imagine that any tiny putative deviation from standard quantum theory could have any conceivable role to play in mental phenomena!”

In the above, Penrose placed his cards down on the table when he said that “deviations from quantum theory have never been observed”. (Though the word “observed” may be controversial here.) Nonetheless, this is the crux of Penrose's position:

i) Quantum gravity (or the “structure of space-time”) may have an impact on quantum mechanics.
ii) Therefore quantum gravity may affect the nature of the brain and consciousness.

All the above is expressed in the following:

This is, of course, “an unconventional view-point” (or it was in 1990!). It's “unconventional that general relativity should have any influence at all on the structure of quantum mechanics!”. More basically, Penrose believed that “the problems within quantum theory itself are of a fundamental character”.

Penrose concluded – again, in 1990 (27 years ago) - by saying that “any putative quantum gravity theory would surely be very remote from the phenomena governing the behaviour of brains”.

At its most basic, gravitation and general relativity aren't integrated in quantum theory. That alone makes Penrose's views on consciousness speculative. Penrose himself says that quantum theory doesn't play a part in (his) “objective state reduction”. It's here where quantum-gravitational effects come to the rescue – at least as far as Penrose is concerned.

Why the pressing need to square (or couple) gravity with quantum mechanics? Some argue that that a classical system can't be squared (or coupled) with a quantum system. (Though that would of course depend on what the word “coupling” or “squaring” means.)

So why does Penrose see his position on quantum gravity as important in relation to brains and their microtubules? According to Penrose, it's in the microtubules where quantum states can become “reduced” by gravitational influence. This isn't the case with the large-scale brain as a whole – the “classical environment”. Or at least with the brain as a whole (or its parts) taken as also being large-scale.

What's happening here is a strange a connection between the very-small scale and the large scale. In Penrose's view, the brain (or its microtubules) are linked to fundamental spacetime geometry and thus also to quantum gravity.

Max Tegmark (1999/2000), among many others, has questioned not only the relevance of quantum states in the brain as a whole (or in the brain's separate parts); but also in the case of the very small microtubules. Put simply, quantum happenings can't last long enough to have an important role in consciousness. (The consensus seems to be on Tegmark's side on this; rather than on Penrose's.)

More technically and in terms of quantum happenings, Tegmark believes that even in the microtubules (never mind the brain or its other large-scale parts), quantum superpositions within the microtubuli would - or could - never last long enough to bring about consciousness (or any other significant mental phenomena). Nonetheless, Tegmark's position has in turn - rather predictably - been the subject of criticism. S. Hagan and Stuart Hameroff (2002), for example, have backed up the position of Penrose by saying that such quantum superpositions could (or can) last long enough to have significant large-scale effects – at least in theory. Indeed there's been substantive research – i.e., outside the brain and consciousness - into interacting spins and entanglement which suggests that superpositions can have a longer lifespan.

The connections between the very-small scale and the large scale have just been stressed. Confusingly, this phenomenon runs parallel with the need for quantum happenings within “systems” to remain isolated from the outside of the aforesaid systems. More specifically (in terms of the brain and consciousness), Hameroff and Penrose do believe that microtubules are isolated from the rest of the brain. Due to the spiral structure and shape of microtubules, the quantum happenings within them remain isolated from the outside world (i.e., from the rest of the brain and outside the brain itself). However, if this is the case, how is the quantum very-small scale connected to the brain's large scale? According to Penrose, it's quantum gravity which links the quantum happenings in the microtubules with the brain to bring about consciousness.

These supposed connections between the very-small scale and the large scale are part of the problem.

To bring this grand theorising down to earth, let's cite one of Penrose and Hameroff's own examples of this.

Quantum coherence (at least in terms of microtubules, the brain and consciousness) is the idea - or reality - that there can be “subatomic cooperation”. In other words, there's a possibility of communication between subatomic elements within the brain. (Let's not get too pedantic about the word “communication” here.)

Despite these speculations about microtubular connectivity also causing inter-neural connectivity, it's still argued that there's a problem with the theory that happenings in single synapses have an impact on the happenings of, say, neural assemblies.

It's also been said that entanglement and nonlocality may be applicable to communication systems and to other phenomena not directly related to the human brain. Anton Zeilinger, for one, has shown - in his laboratories - that entangled particles can indeed be reconstituted in different places. And, if this is the case with artificial experiments involving laboratories, then surely it's even more likely to be the case when it comes to the brain's microtubules... Or, indeed, is it less likely?

Posted by Paul Austin Murphy at 17:24