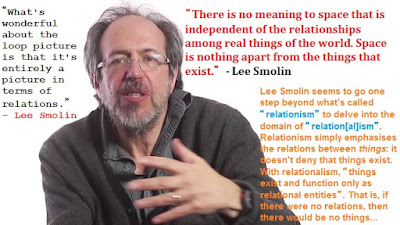 Lee Smolin is an American theoretical physicist who has contributed to quantum gravity theory. He specifically known for the theory of loop quantum gravity.

In terms of the following piece, Smolin is a very philosophical theoretical physicist and cosmologist who takes philosophical positions on various issues in science. One example of that is his position on the nature of space and time and the things (to use a very broad term) which exist within space and time.

Newton on Space and Time

“atoms with fixed and absolute properties move against a fixed background of absolute space and time”.

Smolin concludes by saying that this Newtonian picture is “quite dead”.

Smolin is what philosophers would call an anti-essentialist. That is, Smolin doesn't believe that there are “intrinsic properties”. Instead, as he puts it, “all properties are about relations between things”.

Thus, in the quote above, Smolin used the words “absolute properties”, by which he meant:

Such much for absolute entities. What about Newtonian space and relations?

Smolin's alternative picture to this is a “relational” or “dynamical”. It's a case of spacetime itself - and all properties/things/atoms within it - being relational or dynamical. In other words, in Smolin's universe, literally nothing is absolute or intrinsic.

Leibniz on Space and Time

Smolin then cites Gottfried Leibniz as a relationist. Or, at the very least, he sees Leibniz as being a relationist when it comes to space and time. So, unlike Newton, Leibniz

“wanted to understand [space and time] as arising only as aspects of the relations among things”.

Smolin adds that this opposition is a “key theme in the story of the development of modern physics”.

In terms of Leibniz again, Leibniz's position (as expressed by Smolin) is that space and time don't exist – at least not as independent phenomena. Space and time essentially arise as ways of making sense (as it were) of the (as Smolin puts it) “relations among things”. In other words, space and time are the means by which we plot the relations among - or between - things. That basically means that if there were no things, then there would be no space and time either. That is, space and time aren't (to use Smolin's word again) “absolute”: they're a consequence of things and their interrelationships.

So here are two alternative conclusions:

“absurd in general relativity to speak of a universe in which nothing happens”.

Smolin explicitly states his relationist (or Leibnizean) position in the following:

“There is no meaning to space that is independent of the relationships among real things of the world. ...Space is nothing apart from the things that exist. ...If we take out all the words we are not left with an empty sentence, we are left with nothing.”

However, there may be a problem here with the use (above) of the word “relationist”. That's because there are in fact two different words which are often used within this metaphysical context: “relationism” and “relation[al]ism”. Prima facie, they denote two (slightly?) different positions. However, on analysis, the distinctions between them appear to break down – at least in certain respects.

On my own reading, Lee Smolin seems to go one step beyond what's called “relationism” and delves into the domain of “relation[al]ism”. What I mean by that it can be said that relationism simply emphasises the relations between things: it doesn't deny that things exist. With relationalism (with an added “al”), on the other hand, “things exist and function only as relational entities”. That is, if there were no relations, then there would be no things. Relationism, on the other hand, simply notes the importance of relations between things; it doesn't claim that things - in and of themselves – don't exist.

Nonetheless, even if these definitions are incorrect (or if I've misnamed Smolin's own position), it's still the case that there's a difference between what can be called the eliminativist and the non-eliminativist position on things.

Thus relationalism is like ontic structural realism (which will be discussed later) in that the latter eliminates things from its metaphysical picture (“every thing must go”). Relationism, on the other hand, simply places relations in an important position in the metaphysics of things.

Having said all that, it's hard not to see the importance of relations even if one accepts the existence of things as independent entities. (Of course the metaphysical notion of independence would also need to be cashed out.) On the other hand, it's also hard to accept (prima facie) the elimination of things from the metaphysical picture.

Moreover, one can also see the vital importance of relations when it comes to physics. On the other hand, one can't really see how things could be entirely eliminated from physics either. (This may also ultimately depend on how the word 'thing' is defined.)

Yet in (“analytic”/pure) metaphysics one can indeed conceive of (or imagine) a metaphysical picture in which things don't exist. One could also imagine a picture in which things don't have any relations (at least no causal relations) to other things or indeed to anything. These scenarios could constitute the metaphysical natures of particular possible worlds. Though, since Smolin is dealing with the actual universe, it's hard to make sense of such metaphysical eliminativism when it comes to physics itself.

Nonetheless, relation[al]ism can also be read as not actually being eliminativist at all. After all, this metaphysical position may simply have it that things (or entities) aren't what's called “self-standing”. To put that another way: what makes things the things that they are may be their relations to other... things. Or we can even say that particulars (things) are essentially relational. Alternatively, we can say that all a thing's properties are relational. That is, it has no “intrinsic properties”.

Thus, in a weak (or even strong) sense, if all things only have relational properties (and such properties literally make all these things the things that they are), then there is a sense in which things are indeed eliminated from the metaphysical picture. To put that simply: if a thing's relations (or relational properties) were eliminated, then it would no longer be that thing. Indeed it would no longer exist.

Despite all the above, it's still hard to make sense of the idea (to use Smolin's words) that “the world is [only?] made of relations”. What does that mean?

This question also relates to the metaphysical position known as scientific structuralism (i.e., in the philosophy of science). Here too relations and structures are deemed to be fundamental. Yet two similar questions can also be asked here:

i) How can there be structures without things?

ii) How can there be structures without space and time?

So, again, how can the world be “made out of relations” alone? The same goes for Smolin's other claim that “all properties are about relations between things”.

As for the elimination of things. Take this simple sentence: “x is bigger than y.”

Despite that, there may indeed be certain relations (or relational properties) which don't involve concrete things. (There are relations between numbers, for example.) However, if we return to Smolin, it's not the case that he's talking about relations between abstract entities even if the relations themselves can be deemed to be abstract.

Smolin elaborates on his relationist universe firstly by saying that if

Here Smolin's position is fairly close to another structuralist position in the philosophy of science. Namely, the contemporary philosophical metaphysical position (as usually applied to physics) of ontic structural realism. In the ontic structural realism picture, “it doesn't make sense to talk about” things with their own determinate (or intrinsic) properties when these things “can only be distinguished” in terms of their structures and relations to other things (within spacetime). In simple terms, the “things” of ontic structural realism can only be distinguished in terms of their mathematical structures and relations. There literally isn't anything else.

So just as spacetime works as a means to plot dynamic properties and things together, so ontic structural realism has it that things are mere placeholders used to plot relations and structures together.

“I believe that the main lesson of relativity and quantum theory is that the world is nothing but an evolving network of relationships.”

“[t]he geometry of space and time changes and evolves, as does everything else in nature”.

What's more, “[w]e no longer have fields moving in a fixed-background geometry”. Instead,

“[w]e have a bunch of fields interacting with one another, all dynamical, all influencing one another, one of which is the geometry of spacetime”.

Smolin christens this a “background-independent theory”. He defines this position as one in which

“[n]either space nor time has any existence outside the system of evolving relationships that comprises the universe”.

Indeed this soup of interrelating fields not only creates spacetime, it also creates the particles and all the other entities/conditions which exist at a specific point in time and place in space.

As just stated, Smolin makes his metaphysical relationism more concrete by tying it the physicists' notion of a “field”. More specifically, he ties it to the theory of “electric fields”. According to Smolin, “physicists using general relativity” can't

“speak of a point, except by naming some features of the field lines that will uniquely distinguish that point”.

Moreover, this “network of relationships evolve[s] with time” and is “constantly changing”.

The loops of loop quantum gravity theory describes the nature (or structure) of space. That is, loops are extremely small (the size of a Planck length) and they make up the “fabric” of space. Loops are also called “spin networks” (which provides a “spin foam”). Thus both matter and space (in the loop quantum gravity picture) are deemed to be “atomic” (this word is used very loosely in this context).

Smolin himself says that

“what's wonderful about the loop picture is that it's entirely a picture in terms of relations”.

In more detail, in this picture it's the case that there's

“no preexisting geometry for space, no fixed reference points; everything is dynamic and relational”.

“[t]his is the way Einstein taught us we have to understand the geometry of space and time – as something relational and dynamic, not fixed or given a priori”.

So whereas Newton believed that space and time are fixed; Smolin rejects that position by claiming that there's “no preexisting geometry for space” (or “no fixed reference points”). That means that we have a spacetime with a geometry that's “relational and dynamic”.

However, it's almost certainly the case that Einstein would never have expressed his own position in Smolin's own way. Nonetheless, Smolin's words may well still be an accurate (or faithful) reworking of Einstein's essential position on spacetime geometry.

“In string theory one studies strings moving in a fixed classical spacetime. ...what we call a background-dependent approach. ...One of the fundamental discoveries of Einstein is that there is no fixed background. The very geometry of space and time is a dynamical system that evolves in time.”

Indeed Smolin (along with such people as Carlo Rovelli, John Baez and Abhay Ashtekar) have rejected string theory precisely because he deems it to have retained the (Newtonian) notion of “absolute space”. Loop quantum gravity, on the other hand, upholds “backgroundlessness”.

So here again Smolin allies himself with Einstein and connects his own “background independent” theory to his metaphysical relationism.