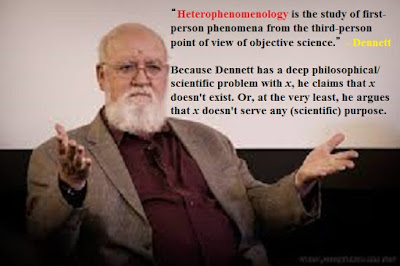 This piece is a critical account of the 'Heterophenomenology' chapter of Daniel Dennett's book, Intuition Pumps and Other Tools For Thinking.

Daniel Dennett sums up his project with his own neologism: “heterophenomenology”.

Dennett's very own kind of phenomenology

“is the study of first-person phenomena from the third-person point of view of objective science”.

Since phenomenology was originally seen simply as a (to use Dennett's own words) “catalogue of phenomena”, then there's no necessary reason why it should only be a first-person study of first-person mental states, experiences or consciousness. Instead what is studied is “first-person phenomena from the third-person point of view”.

Dennett goes into more detail when he adds that heterophenomenology

“exploits our capacity to perform and interpret speech acts, yielding a catalogue of what the subject believes to be true about his or her conscious experience”.

Again, this isn't a “catalogue” of conscious experiences, pains, mental states, qualia, etc. "in themselves". It's a catalogue of the “speech acts” about these things. That is, speech acts, physiological responses, physical behaviour, "verbal reports", etc. are the subject of heterophenomenology - not consciousness, experiences or mental phenomena. However, by using this neat bifurcation, I am, of course, begging the question against Dennett (i.e., already assuming the truth of my own general conclusions).

Since phenomenology was originally seen to be the study of phenomena (again, according to Dennett) “before there is a good theory of them”, then how does this work in the case of third-person (scientific) accounts of first-person mental phenomena? After all, Edmund Husserl and other phenomenologists saw their own phenomenology as being “presuppositionless” and non-theoretical. Not only that: it was an attempt to provide a basis (or grounding) for science.

Daniel Dennett makes a distinction between

“(a) conscious experiences themselves”

“(b) beliefs about these conscious experiences”.

Basically, to the behaviourist and verificationist Dennett, it's all about the latter. And in order to make us understand that, Dennett asks us this question:

“Should we push on to (a) in advance of theory?”

He then states the following:

The words “if you have conscious experiences you don't believe you have” must surely be rhetorical in nature. Or, more strictly, an example of a false inference.

Dennett is failing to make a distinction between experiences we don't make statements - or have beliefs – about (or even think about in any great detail - perhaps not at all), and having “having experiences [we] don't believe [we] have”. Clearly that latter phrase is constructed precisely in order to make it seem (or be) self-contradictory. How can a person have experiences that he doesn't believe he has? Nonetheless, it's actually the case that a person might have had experiences which he had no beliefs about when he actually had them. He simply might not have had “second-order” thoughts or beliefs about those experiences. That is, because “beliefs” weren't (as it were) attached to these particular experiences when they were first experienced, Dennett concludes that such a person must now have “conscious experiences [he/she doesn't] believe [he] has”.

Past and Present Experiences

It's not entirely clear if the “conscious experiences” Dennett refers to are past or present experiences. In the latter case, his position becomes absurd. Or, rather, Dennett is attempting to make other people's positions on these questionable experiences seem absurd. That is, if a person is currently having an experience, then how is it even possible for that person to also believe that he doesn't believe he's experiencing it now? Dennett, therefore, wants this position to be absurd. But that's because he's taking an absurd position on what he takes to be an absurd position.

So what about using the past tense?

There are two main behaviourist and verificationist problems here:

Thus, in Dennett's book, these experiences are like Wittgenstein's “idle wheels in the mechanism”. (Wittgenstein himself was referring to such things as sensations.)

Dennett again fudges the issue when he says the following:

“... if you believe you have conscious experiences that you don't in fact have...”

Again, is this a past-tense or present-tense problem?

It's obviously bizarre if, at this present moment in time, a person is having a conscious experience which he isn't in fact having. This is ruled out by Dennett's behaviourism and verificationism anyway. Indeed how could a third person, on the other hand, know either way? And how could the first person himself believe that he's having an experience that he isn't actually having?

So this scenario fails in both first-person and third-person terms. That's because it's a the position of a straw target.

What's absurd isn't that a person believes that he's having an experience which he isn't having. It's absurd that Dennett claims that someone would claim (or simply believe) such a thing. Similarly with the earlier case. It's not absurd that people have conscious experiences which they don't believe they have. What's absurd is Dennett believing (or simply stating) that there are people who believe (or state) this.

Again, these fictional subjects/persons appear to be straw targets manufactured so that Dennett can make his verificationist and behaviourist points.

Dennett's position is that such “conscious experiences themselves” (as already stated) are idle wheels in the mechanism. Indeed Dennett himself (more or less) states this many times and in many places.

Strangely enough, Dennett does seem to relent a little when he asks this question:

“What if some beliefs are inexpressible in verbal judgements?”

I used the word “seems” for a good reason. It's of course the case that Dennett doesn't accept even the very notion of inexpressible beliefs. At least not (like his earlier views on “conscious experiences”) as they are "in themselves”. Instead, such inexpressible beliefs are actually accounted for by (later) “verbal judgements” or by physiological tests (depending on the particular case).

Take an inexpressible belief about a toothache.

According to Dennett, this is fully (or perhaps only partly) accounted for in terms of physiological “galvanic skin response[s], “heart rates” and “changes in facial expression and posture”. More fully, these things aren't responses to pains in themselves: they're responses to a test in which the subject

“can press a button with variable pressure to indicate severity of pain”.

In the specific case of a toothache, we no longer have a “ineffable residue[]” of experience (or qualia): we only have tests and physiological responses.

Dennett puts the icing on the cake by arguing the following (to paraphrase):

Sure, it's okay to accept that a person believes that some of his beliefs are inexpressible and that he also has belief-free experiences. However, what's not okay is to accept conscious experiences in themselves, beliefs that are truly inexpressible, and pains which entirely run free of behavioural expressions and physiological third-person/scientific data.

In other words, a subject's verbally-expressed belief that some of his other beliefs are inexpressible is indeed a fit subject for both science and philosophy. Or, as Dennett puts it, the statement

“S claims that he has ineffable beliefs about X.”

What Dennett Gets Right

Now it's certainly true that “pure experiences" are problematic from a verificationist or behaviourist point of view. (Indeed it can also be said that they're problematic from any point of view!) It may also be problematic to accept “conscious experiences” which completely “outrun” what Dennett calls “beliefs”. However, it doesn't logically follow from all this that certain conscious experiences can't be unaccompanied by beliefs and which are later referred to in some way. It certainly doesn't follow that people have consciousness experiences they don't believe they have. Dennett is attempting to turn his philosophical problem into a logical problem. It isn't.

To put all that in a more abstract way.

“obviate the need for any radical or revolutionary 'first-person' science of consciousness, and leave no residual phenomena of consciousness inaccessible to controlled scientific study”.

A moment ago it was said that Dennett's supporters say that he doesn't deny consciousness at all. And that's why Dennett himself says (in the just-quoted passage) that we

“leave no residual phenomena of [my italics] consciousness”.

That is, he doesn't say:

We leave no residual consciousness.

consciousness = that which is described by third-person/scientific data

Now if consciousness literally is all these things, then how on earth can anyone claim that Dennett “denies” or “explains away” consciousness? Nonetheless, Dennett does indeed see consciousness in a way which is radically at odds with the way the vast majority of people see it. Then again, Dennett wouldn't deny that. He'd probably say: Yes; so what?

Thus, with extreme facetiousness, it can now be concluded that Dennett's position is a little like this very-odd (fictional) theist's position when he states the following:

No! I'm not an atheist! I believe in God - just like you. However, unlike you, I take God to be that large lump of blue cheese which is now in my fridge.