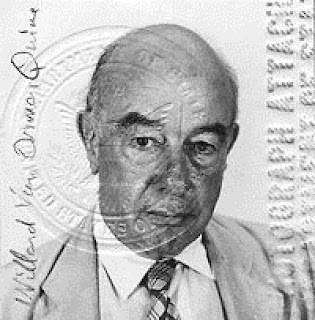 The problem of analyticity goes back at least as far as Leibniz. It then become the victim of a series of “sign substitutions” (to use Derrida’s term).

The essential distinction we can make is between synthetic and analytic statements (to opt, essentially, for Immanuel Kant’s terms). David Hume, for one, made the following distinction between

Kant is known not for making this distinction: he's known for clarifying what he deemed to be an analytic statement. He said that analytic statements attribute to their subjects nothing more than is already conceptually contained in the subjects. An example of this would be:

To generalise: an analytic statement is true “by virtue of meanings [alone] and independently of fact”. So if the subject-term is true, then the predication must be true. The meaning of “Prime Minister Boris Johnson” makes the meaning of “is a politician” true. That is, it can be deemed true without recourse to experience, providing we accept the truth of the subject-term.

Quine then moves away from analyticity itself and has something to say about meaning.

Quine points out that astronomical observation was required to determine the number of planets in our world; though astronomy isn’t needed to determine the referent of “9”. This means that we need to distinguish the meanings of general terms (rather than particular terms) from their extensions.

Quine gives the examples of “creature with a kidney” and “creature with a heart” as having the same extension. This means the collection of objects that are the extension of the former are also the extension of the latter. But, again, the meanings of these two examples are clearly not the same. So extensions alone don't provide us with the meanings of terms. Saying something has a heart is clearly not the same as saying that something has a kidney.

Quine then goes in for a bit of historical exegesis. According to him, the concept [essence] is historically related to the concept [meaning]. More precisely, “essence was the forerunner…of the modern notion of intension or meaning”.

Quine rejects the whole notion of essence. He says that

“it makes no sense to say of the actual individual, who, is at once a man and a biped, that his rationality is essential and his two-leggedness accidental or vice versa”.

(The class of men and the class of bipeds both include the same extension.)

Quine doesn’t see why this distinction between essential and contingent properties is made. It appears in essence to be entirely arbitrary and seems to serve no real purpose. Why is rationality essential and two-leggedness contingent (or vice versa)? Is an irrational man not, well, a man? And if an elephant were rational, would it be a man? And so on.

What's the connection Quine is making between essence and meaning?

Traditionally, according to Quine, only things had essences. And, of course, only linguistic forms have meanings. But, somewhere along the line, essences became meanings. As Quine puts it:

“Meaning is what essence becomes when it is divorced from the object of reference and wedded to the word.”

Quine wants to jettison this traditional view of meanings (as mental or abstract entities behind or prior to their expression). All he now wants from meaning is “simply the synonymy of linguistic forms and the analyticity of statements”. This means that when someone asks for the meaning of a statement, we don't refer to abstract mental entities or even mention them; we simply offer a synonym of that statement.

As for the analyticity of statements: the subject and predicate of an analytic statement are not synonyms because they both contain the same meanings; but because they're both mutually inter-translatable. Meanings “as obscure intermediary entities may well be abandoned”.

Quine shows us what he means by giving us an example of a “logically true” statement. Take the following:


This statement is “logically true”. Why? Because “under any and all reinterpretations of ‘man’ and ‘married’ it remains true". That is, the logical particles “no”, “un-“, “not”, “if”, “then” and “and”, would remain the same in all reinterpretations even if we substitute “bloke” for “man” or “heterosexual” and “gay” for “unmarried” and “married”, as in:

No heterosexual bloke is gay.

No non-gay is gay.


Because of the similarity of terms, Quine’s substitution seems clearer than my own.

No heterosexual is gay.


again. Can we really know this to be true independently of experience (or Humean matters of fact)? It's indeed true that “bachelor” is defined as “unmarried man”. Though how do we find this out? We could look at a dictionary. But, according to Quine, the lexicographer “is an empirical scientist”. That means that he's found out certain matters of fact. Namely, that among English speakers “unmarried man” is deemed the definition of “bachelor”. More correctly and relevantly, “unmarried man” isn't the meaning of “bachelor”: it's a synonym of that word. Again, there's no need to advert to entities called “meanings”. So not only does


not depend on meanings for its truth: it may not be truly analytic either. Why is that? Because we depend on the “general or preferred usage” of the terms involved in the statement. And they exist prior to our own articulation of it.

Quine goes into more detail about the exact nature of definitions.

His first point is that the relation of synonymy (say, between “bachelor” and “unmarried man”) is stipulated or created “by fiat” - to use Quine’s own term - between the definiendum (“bachelor”) and the definiens (“an unmarried man”). This relation of synonymy, according to Quine, “did not hold before”. That’s why it is stipulated or created by fiat. The

This seems to be Quine’s way of saying that these synonyms are the result of convention (or human will); rather than the matching up of both terms with pre-existing mental or Platonic entities (i.e., meanings). We decide that “bachelor” and “unmarried man” are synonyms. They aren’t made so by prior meanings. The synonymy “is created by definition”, not by abstract meanings.

All unmarried men are unmarried.


without a change in truth-value. We can also substitute, in this context, “men without wives” for “bachelors” salva veritate. These stipulative synonyms could be almost indefinite.

Quine then goes into greater detail about the nature of synonymy. He talks about two forms of synonymy between words or statements.

So, again, we turn

Quine still has a problem. And that problem is: What is “analytic”? (Rather than: “What does ‘analytic’ mean?”) Quine explains his problem. To say

Necessarily all and only bachelors are unmarried men.

Here Quine recaps on the notion of extensionality. He says that two predicates are extensional when they are true of the same object. From there we can move to synonymy or analyticity. That is, the two predicates just mentioned can be interchanged salva veritate (i.e., while retaining truth). So the two predicates used within the same statement will guarantee synonymy and therefore analyticity. Though Quine says that in an “extensional language…interchangeability salva veritate is no assurance of cognitive synonymy”. What’s Quine’s problem? Well, to be cognitively synonymous is to say that a statement must be a logical truth, not an analytic truth. A logical truth is


whereas an analytic truth is


They clearly aren’t identical. To guarantee an analytic truth’s independence from syntheticity (or Humean matters of fact) would require it to be, well, a logical rather than an analytical truth. Quine goes on and says that “’bachelor’ and ‘unmarried man’ are interchangeable salva veritate in an extensional language assures us” of this. That

We're back to analyticity, which hasn’t been adequately explained. Though there's a synthetic, rather than an analytic, component to the statement above. There's no

“assurance here that the extensional agreement of ‘bachelor’ and ‘unmarried man’ rests on meaning [analyticity] rather than merely on accidental matters of fact”.

Analyticity appears to be a mere will-o’-the-wisp. Quine went through a whole series of stages to try and find analyticity. Firstly:

“Analyticity…seemed most naturally definable by appeal to a realm of meanings.”

“On refinement, the appeal to meanings gave way to an appeal to synonymy or definition.”

As Quine put it, “we are back at the problem of analyticity”. We have delineated a circle of terms which are all mutually interdependent and inter-definable.

Quine changes his tune a little by forgetting about bachelors and unmarried men to focus on what is a famous example of an analytically true statement:

Everything green is extended.


Is that statement analytic? Intuitively it seems to be analytically true (or simply analytic). How can anything be green and not be extended? Greenness needs something to be green: it doesn’t just float in the air (what about rainbows?). And if the colour green needs an object to be green, it can’t exist apart from an object, then everything green must be extended.

Carnap said that we firstly formulate an artificial language. Call it Lo. The semantical rules of Lo tell us which statements of the language are analytic.

After this account of Quine’s position on analyticity, we should be able to guess his problem with this approach. I wrote earlier that Lo tells us which statements should be taken as analytic. Yes; but we don’t understand the word “analytic” in the first place. So how do the stipulations of Lo solve our problems with analyticity? To use Quine’s own words, we “understand what expressions the rules attribute analyticity to, but we do not understand what the rules attribute to those expressions”. That is, Lo tells us what statements are analytic; though it doesn't tell us what “analytic” means. So we're back to analyticity again. Quine thinks that Carnap would have been forced back to uninterpreted analyticity thus:

“A statement S is analytic for language Lo, if and only if…” (it's analytic)


More to the point, by “saying what statements are analytic for Lo, we explain ‘analytic-for-L’ but not ‘analytic’” but analytic for…

So instead of explaining the word “analytic”, we can explain “semantical rule” instead. Now Quine makes a holist point about this and the other explications of analyticity. (Quine was very big on holisms of various descriptions). He would say: Yes, of course analytic can be accepted or defined within a system or a system of terms. (We mentioned the analyticity circle earlier one.) In terms of what postulates are, he says:

And the same is true of semantic rules:

To get back to semantic rules.

Quine said that semantic rules are

“determining the analytic statements of an artificial language are of interest only in so far as we already understand the notion of analyticity; they are of no help in gaining that understanding”.

Why spend so much time on the notion of analyticity? Well, for a start, the belief that

was what Quine was arguing against. This is, in fact, the first dogma of empiricism. If you take the linguistic/factual dualism to be true, then one will believe that a statement in which there is no factual element, then that statement will be analytic. But Quine has argued that no such division can be made. The so-called “analytic” statements he analysed contained both a factual and a linguistic element. As he concludes:

“…a boundary between analytic and synthetic statements simply has not been drawn.”

Such a belief in analytic statements is an “unempirical dogma of empiricists, a metaphysical article of faith”.

Posted by Paul Austin Murphy at 08:38