Putnam on the Virtues & Vices of Ordinary Language 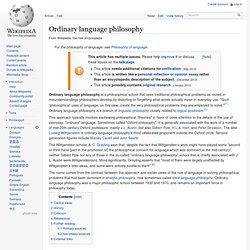 Perhaps it follows from Hilary Putnam's critique of obsessive formalism (in philosophy) that he would also have championed the use of ordinary language, if not of the ‘ordinary language' school and its actual doctrines. Putnam himself says:


This also follows from Putnam’s suspicion of the formalising tendencies in philosophy; as well as the strong attention to the efficacy - and indeed glorification - of mathematical logic.


Of course the ordinary language philosophers were indeed primarily concerned with the minutia of ordinary language. That was certainly the case with J.L. Austin; though not someone like Peter Strawson (e.g., with his ‘descriptive metaphysics’).


Putnam gives some examples of these ‘violations’ that not only use language that's at odds with ordinary language, but also say things which are themselves philosophically suspect. For example:


“The fact that we never speak of 'directly perceiving' and 'not directly perceiving' in everyday language in the way that traditional epistemologists do was a sign that something was really quite wrong with the traditional philosophy of perception, something already noticed in the eighteenth century by Thomas Reid, by the way. Reid sounds very Austinian when he fulminates against the strange ways philosophers talk about perception. I think that’s a corrective one should apply to one’s own thought.” (234)


The problem with this position is that it may not (or will not) allow philosophers any leeway to say anything new because that would be bound to go against the dictates of everyday language. Would we say the same kind of thing to poets when they use a strange (or any kind of) metaphor – that they too are going against everyday language? I hope not. In addition, the very fact that philosophy is an academic disciple (that is, a specialism) surely means that it's bound to say novel things in novel ways. Indeed Rorty, for example, says that it is almost the duty of philosophers to say strange things in strange ways. This is parallel to the situation with metaphors, he argues. That is, if metaphors were indeed literally translatable into everyday language, then they would simply loose their point.


I’m not even sure about Putnam’s examples. Is it really the case that the phrase “directly perceiving” is suspect from an everyday language point of view? It makes sense even if it's philosophically suspect. It would even make sense to the layperson.


These examples (given by Putnam) aren't like some of the stuff you can read in the academic journals of contemporary analytic philosophy (especially if written by postgraduate philosophy students!). So although I agree with Putnam to some extent, I think he goes a little too far. In addition, he should make a distinction between plain pretentiousness and the unavoidable fact that a disciple like philosophy is bound, at times, to be written in a prose-style that will make the layperson’s head buzz. You can’t do anything about that; at least in certain areas of philosophy.


Putnam seems to agree that we can't become the Khmer Rouge of philosophers. He says:


“But on the other hand, if another philosopher uses an expression in an extraordinary way or violates its ordinary use, I would never immediately conclude that he or she is talking nonsense. Then the idea of ordinary language become a kind of straightjacket – we know what ordinary language is, we know when it’s violated and we know that when it’s violated nonsense results – I don’t accept any one of those three statements.” (234)


Just as we may say that philosophers shouldn't be too hasty or keen to say that a layperson’s utterances are ‘meaningless’: perhaps the layperson himself shouldn't be too keen (or hasty) to call the writings of philosophers ‘meaningless’ or ‘violations of everyday language’. In that sense, perhaps philosophy is like poetry in that if the poet is to say something truly knew, he may have to say it in a novel way. The same may be true of the philosopher. Indeed some laypersons think that other laypersons are abusing language simply because they don’t understand their new ideas or the way that they're expressed. Perhaps it's really because they don't like what it is that's being expressed and thus cynically claim that it's the way they say it that's the problem.


So these issues don't only arise in philosophy or even only in other academic disciplines.


For example, many people say that ‘newage-ers’ speak nonsense – perhaps they do. Other say that animal rights activists don't even make sense – perhaps they don’t. What about what is said (in everyday language) about ‘super-strings’ or ‘quantum indeterminacy’? Surely that's ‘nonsense’ to the layperson if he can't even be bothered giving the physicist the benefit of the doubt.


In any case, do “we know what ordinary language is” (234)? Do we know “when it’s violated” if we don’t really know what it is in the first place (at least not formally)? Have we got the skills and the right to say when it's violated and that when it is ‘nonsense results’? Should we even be in the business, as philosophers or laypersons of putting “a kind of straightjacket” on our language? If we do, then perhaps all sorts of negative things would result: such as the sterility of thought, a lack of innovation, and, basically, the death of the imagination. Perhaps ordinary things can only be said in ordinary language and extraordinary things can only be said in extraordinary language. After all, language itself has never been static and much of what we said in the past is nonsense by present standards; just as what we say today would have been nonsense to our ancestors. Indeed much of what we say today will be deemed nonsense by future generations.
Posted by Paul Austin Murphy at 22:16