Dani Rabinowitz on the A Priori/A Posteriori Distinction 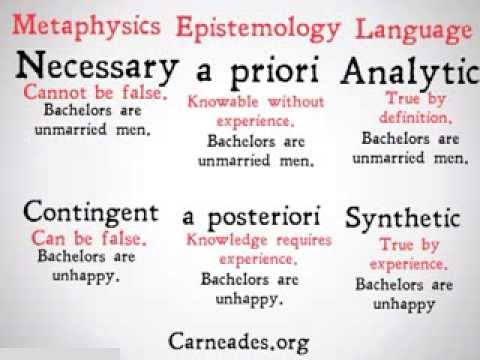 Dani Rabinowitz makes a point that many rationalists or apriorists (e.g. Bonjour and Casullo) would happily concede: that a priori warrant can be defeated by experience.


Take the case of a mathematical calculation. Here's the a priori part:


i) “One could perform a mathematical calculation in one’s head and have a priori warrant for the belief in the result.”


Now for the a posteriori part (or the "experiential defeater"):


ii) “One could realize later, with the aid of a calculator, that one’s calculation was incorrect owing to haste.”


That case may seem trivial because it's an example of a single incident which happened to a single person.


What about Euclidean geometry?


Rabinowitz quotes BonJour who writes that it was “regarded for centuries as describing the necessary character of space, but was apparently refuted by General Relativity”. The nature of Euclidean geometry was said to be knowable a priori, despite the fact that it's ostensibly about space, etc. The simple and fundamental point is that “[o]ne can thus be justified a priori in believing a proposition that is false”. And if an a priori justifification can be shown to be false, then that other traditional attribute of a priori beliefs or propositions, certainty, may be dropped as well.


“So the fallibility of a priori warrant entails that it is not characterized by certainty.”


Much of the defense of a priori knowledge and justification rests of the existence of analyticity (or on analytic statements).


For example, the logical positivists (who generally rejected necessity) accepted it as far as analytic statements were concerned. Then Quine famously questioned the synthetic/analytic distinction.


Rabinowitz comes at this debate from the angle of scientific definitions.


Firstly we must ask: Are definitions analytic? If the answer is Yes, then what about scientific definitions – are they also analytic?


This would mean that there are (analytic?) scientific definitions which “require empirical investigation or experience to be known”. Thus how can the above actually be analytic? It can be necessary; though it is necessary a posteriori or (necessary-synthetic).


Rabinowitz spots the problem. Firstly we must note the following:

It can be seen, then, that i) and ii) aren't ‘coextensive’. However, although Rabinowitz basically subscribes to a Kripkean account of these matters, he's not altogether happy with Quine’s account. Quine famously argued that there are no propositions known (to be true) merely in virtue of their meaning. We can accept that. Is that necessarily also an argument against the a priori, as Quine himself took it to be? We've just argued that ‘analytic’ and ‘a priori’ aren't coextensive. Thus Rabinowitz concludes that “it is incorrect to conclude anything about the a priori from Quine’s arguments against the analytic category”. That is, we can't accept this fallacious argument:

Causal Reliabilism and the A Priori/A Posteriori Distinction


It seems that not even the a priori is safe from cognitive science – or, at the least, it's not safe from philosophers who take on board the findings and work of cognitive scientists. The good thing (for apriorists), though, is that some of the results are positive. According to Rabinowitz, Alvin Goldman


“offers scientific support from psychology and cognitive science for there being cognitive capacity in mathematical computation and logical reasoning that reliably delivers output beliefs deserving of a priori warrant”.


That description above is redolent also of epistemic reliabilism. Goldman is a reliabilist. This very reliabilism proves to be problematic. Take the case of ordinary (or a posteriori) process reliabilism. Rabinowitz writes that


“any token output belief p could be the product of many process types with differing levels of reliability, some highly reliable and others not. The reliability of which process determines the epistemic status of p?...”


One can see what’s coming. What's just been said can now be applied to a priori processes (or reasonings). Rabinowitz says that


“it is possible that there are several process types involved in the production of beliefs we consider justified a priori. There is nothing about rational insight, as rationalists describe it, that pretheoretically disbars there being a conglomerate of process types involved in the output of a single belief under the rubric of 'rational insight'”.

Is the neat little traditional distinction between a priori reasoning and the experiential concepts required for a priori reasoning really acceptable? Rabinowitz takes the case of mathematical knowledge. He offers two descriptions of the same mathematical process. One which accounts for the a posteriori part. And the other which doesn't.


Take the account which is both a posteriori and a priori:


i) “The agent is taught mathematics at school where he first acquires his computational abilities via testimony from his teachers and books. The description ends with the agent understanding and successfully applying the method.”


There is also a purely a priori description of the same process:


ii) “[T]he agent has understood the computational method, recalls it from memory, and ends with the successful application of the method.”


The point is that “[o]n both descriptions the agent at hand has mathematical knowledge”. Should we call the process an a posteriori process or an a priori process? Rabinowitz quotes Hawthorne on this. The latter


“thinks that there is no 'deep fact' as to which process deserves the accolade thus making the a priori/a posteriori distinction an unnatural one”.

Rabinowitz, Dani. (2008) ‘What, if anything, does the a priori/a posteriori distinction come to?’

Posted by Paul Austin Murphy at 09:39