Putnam on the Normativity of Meaning 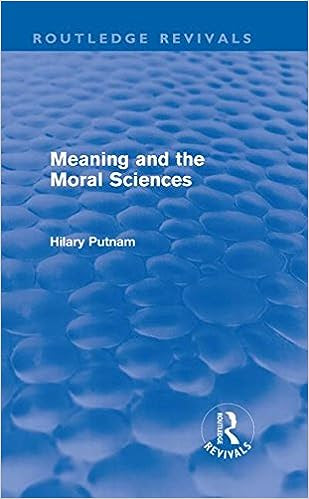 Although Hilary Putnam was broadly seeking a naturalist philosophy he also stressed the importance of normativity in various areas of philosophy.


This is Putnam on normativity:


“[Charles Travis] very often uses the notion of what a reasonable judge would say. That seems tome, even in a very traditional sense, a normative notion.” [2005]


Bringing the notion of what a “reasonable judge would say” makes it very clear what normativity is. It's about the judgement of what's right and wrong in philosophy, not just in ethics.


For example, what are the correct concepts to use and how should we use them? What should we say are the standard conditions of correctness in justification? How should we interpret people’s utterances; especially in they speak another language? And so on.


“The crucial point being made here is that if meaning is normative – that is to say, if it relies to a certain extent on judgement, rather than just 'facts' – several popular theories about meaning are ruled out.”


If meaning has nothing much to do with “just facts” (or even facts at all), then we can never say that what we state about meaning is true. There are no “facts of the matter” (as Quine put it) about meaning: only our judgements as to what we should say about meaning (or what we should take meaning to be). There will be no facts - natural or otherwise - which will conclusively settle the issue or even play any part in the discussion. Of course we can say (as many do) that normative issues (or even normative facts) actually ‘supervene’ on non-normative facts. However, this is still an acknowledgement of non-natural properties when it comes to meaning.


We can say that a normative judgement on meaning (or on anything else) may well rest on non-normative facts; though that judgement is still, nonetheless, not natural or factual in nature.


Putnam finishes the sentence above by saying that if meaning is a normative notion, then “several popular theories about meaning are ruled out”. There have been many philosophers who wouldn't have said that meaning is normative at all. Indeed they would have believed that it's factual (even if they didn't actually use that word).


For example, Platonists and Fregeans would surely have said that meaning is not normative in nature. That is, it has nothing to do with our judgements or what we take meaning to be. However, this doesn't automatically mean that they also took meaning to be a natural phenomenon. If meaning is non-natural, then it's non-natural in a factual kind of a way. (Although all this will depend on how we interpret the word ‘factual’ or ‘fact’.)


A Causal Theory of Meaning


Putnam gives his own example of a theory of meaning that's “ruled out” if one accepts the normative nature of meaning. He says:


“At the time [in the early 1970s] people were very optimistic about characterising the meaning of words, especially nouns, in terms of what they’re causally connected to. There the normativity cuts strongly against that.”


For a start, it seems to be Saul Kripke's “causal theory of reference” Putnam has in mind: his . That's why Putnam says that this causal theory of meaning is “especially [about] nouns”. In Kripke’s case, that means proper names (or, as he called them, “rigid designators”). Clearly, if meaning is all about what words are “casually connected to”, then this seems like a thoroughly naturalistic position on meaning. Indeed even a scientific one. After all, we can't really make judgements about the causal relations (or interactions) between our words and and the world. Causality doesn’t “come under a description” (as Davidson put it). Causation isn't, in itself, even explanatory. We can make it explanatory (as it were); though it's not in itself explanatory. Indeed, according to many causal theorists of meaning, the causal relation between our words (especially nouns or names) and things seems utterly non-cognitive in nature. Thus it can hardly be normative in any way.


Perhaps we still need to make decisions as to what is connected to what.


If our name ‘Tony Blair’, for example, is causally connected to, well, Tony Blair, then perhaps it's also causally connected to his nose, his shoe or even to Mrs Blair (especially if she were always contiguous with Tony Blair). In addition, our name ‘Tony Blair’ may well be connected to Tony Blair; though we don’t always have to use that name or even use it (consistently) at all. We may prefer to call Tony Blair by the name ‘Tony Boy’ instead. Surely these decisions are normative in nature. Indeed the very choice of a causal theory of reference must be normative in nature. That is, even if there are causal relations between our words and what our words refer to, we may not choose to account for that relation in terms of its causal nature. We may simply ignore it or see it as, say, “crudely scientistic”.


Thus even the causal theory of reference is normative in some ways. The philosopher must make a decision of some kind (which would be a normative issue) as to which theory to adopt (even if this theory is philosophically or scientifically kosher). There may even be other true theories of meaning that the causal theorist simply chooses (another normative notion) to ignore. It may be the case that these other theories (or what it is they describe) work in parallel with the causal facts of the matter when it comes to meaning or reference.


Putnam then makes a Wittgensteinian point about why causation alone can't tell us everything we need to know about meaning. He says:


“You can’t just look at what causes you to use a word. You also have to look at the whole context in which it’s used.”


Of course we can say that ‘context’ too can be seen as causal. However, what we take to be context may be a normative choice. Clearly we can't take in the total causal context of a particular word or utterance. That means that we must make a decision as to what context is relevant or salient. The disregarded contexts will still nevertheless by both causal and contextual to the word or utterance. The thing is that we simply choose to ignore them or see them as irrelevant. Why we take them to be so will be a normative.


This stress on the normativity of meaning falls within the larger context - yes, context - of the philosophical tradition of thinking that meanings - and even language generally - is a scientific (not even quasi- scientific) object. Putnam says:


“I don’t think meanings are scientific objects. There’s a big question, then, whether that means that they don’t exist. In a sense, that’s Quine’s conclusion – that we can go on talking about meanings but they don’t really exist at all.”


To me, the very idea that “meanings are scientific objects” seems ludicrous. How could they be? They're abstract and also non-spatiotemporal. They can't be observed, tested, refuted or become the objects of quantification. They're not subject to universal or exceptionless generalisations. They don't take part in natural laws.


However, all this depends on whether or not meanings are taken to be abstract in the first place. So what happens when they're cashed our in thoroughly naturalistic terms? Realists would themselves say that this isn't possible. For a start, the normativity of meaning that we've just been talking about rules this out. Realists about meaning would also rule out such a ‘reduction’ (if it is a reduction). Even supervenience theses of meaning wouldn't allow a complete reduction to naturalist facts – by definition.


You say that meaning is nothing more than X. Thus we can always ask if meaning = X. Consequently, we can say that there's always the possibility of asking whether or not meaning really is X.


Those questions make sense. And because they make sense, meaning surely can't be equal to X.


For example, if the meaning of the word ‘cat’ is explained or described by its causal connection to cats, we can always ask:


Similarly, if meaning is seen in terms of a word’s context of use, we can still ask:


Normative questions still keep on arising. Either that, or we must accept that meanings are abstract and perhaps also sui generis. There is, of course, another option, the one that Quine preferred. That is to say that meanings (however we construe them) simply don't exist at all. Perhaps that’s precisely why we have been debating this issue for such a long time without having got very far. After all, it’s hard to be right (or wrong) about something which doesn't in fact exist. It's the non-existence of meaning that has caused all the problems and kept the debate going for so long. That very longevity and insolubility should have given us a reason for suspecting the very existence of meaning or meanings.


Incidentally, Quine believed, according to Putnam, “that we can go on talking about meanings” even if “they don’t exist at all”. There’s nothing outrageous about this. We talk about Superman; though he doesn’t exist. Of course, in terms of the word 'Superman' philosophers would dispute such an “empty reference” and thereby posit some kind of being that Superman has. In any case, Quine (regardless of his position on meaning) has to use the English language even when denying the existence of meaning. He has no choice but to do so. Quine could even have said:


The sentence “Meanings are abstract entities” has no meaning.


Quine wouldn't have contradicted himself. It simply depends on what he meant by ‘meaning’ or what he committed himself to when he used that word. More precisely, Quine did believe in the adjectival use of ‘meaningful’ or ‘meaningless’; though not in the noun ‘meaning’. However, not even that may matter much in the context of his having to use the words which the English language (or even all languages) gives him. Similarly, elimitivist materialists can quite happily and without self-contradiction use the words ‘belief’ and ‘believe’ without scruples. They too must use the English language – especially when debating with propositional-attitude realists. Again, it depends on how Quine construed meaning or his use of the word ‘meaning’. If it's suitably construed, then there's no problem.


If the definition of is: meaning = X. Then meaning is nothing more than X. Thus why not substitute the word ‘meaning’ and put in its place the word/letter ‘X’? Quine would have been happy to do this. However, it would have created problems when it came to communicating with other people – even other philosophers - simply because ‘meaning’ is so entrenched in the language. In addition, if we were to flesh out the word ‘X’ (a substitute for ‘meaning’), that fleshing out may make things inordinately complex and therefore incomprehensible (at least in all non-philosophical contexts). Thus Quine, at least in non-philosophical contexts, would have simply needed to stick with the word ‘meaning’ or ‘meanings’. He had no choice but to do so. Either that or he could have given up on effective communication altogether.

Posted by Paul Austin Murphy at 22:01