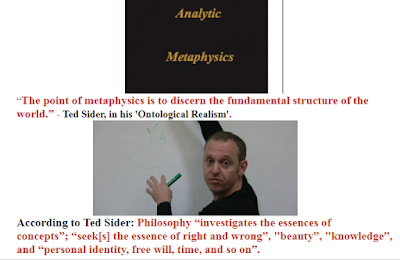 “The point of metaphysics is to discern the fundamental structure of the world.”

“[t]hat requires choosing fundamental notions with which to describe the world".

Indeed Sider continues by saying that “no one other than a positivist can make all the hard questions evaporate”. Finally:

“There’s no detour around the entirety of fundamental metaphysics.”

Sider also makes it plain that metaphysics asks fundamental and important questions by asking the reader his own question:

“Was Reichenbach wrong?— is there a genuine question of whether spacetime is flat or curved?”

The obvious response to that question is say that's a scientific (i.e., not a metaphysical) question. Unless it's the case that metaphysics can offer insights on this which physicists are incapable of...

More technically, Sider cites Quine's work (as well as the quantification of metaphysical structure) as the means to establish an answer to the question above (as well as others). Thus what is realist in Sider's ontological realism is “objective structure”. This does the work done in the past by objects, entities, events, laws, essences, conditions, etc.

It's interesting that Sider stresses the importance of structure in both science and metaphysics considering the fact that analytic metaphysicians just like Sider are the main enemy of, for example, ontic structural realists; whom also stress structure. (See my 'The Basics of Ladyman and Ross's Case Against Analytic Metaphysics'.)

And the main reason for all Sider's position is his metaphysical realism. That's not such a big problem because that's how Sider (indirectly) classes himself. He writes:

“A certain core realism is, as much as anything, the shared dogma of analytic philosophers, and rightly so.”

It's certainly not the case that “core realism” has been a “shared dogma of analytic philosophers”. There have been anti-realists, idealists, positivists, pragmatists, instrumentalists and all sorts within analytic philosophy. Thus Sider may/must mean something slightly more subtle.

This us what I mean by "subtle".

Sider used the adjective “core” in his term term “core realism”. So perhaps he means this:

Deep down, and when push comes to shove, realism is a shared dogma of analytic philosophers, as it is for almost everyone.

That is, almost everyone (including analytic philosophers) believes that the “world is out there, waiting to be discovered”. That's true; though in a very vague sense. Even an anti-realist believes that (though not an idealist as such). Sure, there's a world that exists regardless of minds. So?

Thus it's what Sider says next that problematises his position.

He says that this world that's “out there, waiting to be discovered” is “not constituted by us”. That depends on so much. Minds, conceptual schemes, language, sensory systems, etc. don't literally make the world in the sense of creating its matter, forces, materials, etc. However, minds may well – even if in some subtle or limited sense – structure/shape/determine/colour (whatever word is appropriate) the world. That is, anti-realists and almost the majority of philosophers believe that we don't get the world “as it is” in its pristine condition. And nature doesn't “tell us what to say about it”.

In that sense, at least according to many philosophers, Sider is wrong when he says that

“[e]veryone agrees that this realist picture prohibits truth from being generally mind-dependent”.

The problematic word here is “truth” - and that usage may explain Sider's ostensibly extreme philosophical position. It's obviously the case that not “everyone agrees” that the world/nature is “generally mind-independent”. It depends on how that phrase is taken. That is, people may well believe that truth is in some (or many) ways mind-independent. However, metaphysics itself is about the world and its “fundamental nature”.

Thus the truths Sider is talking about are about the world. So do we ever have guaranteed truth in metaphysics? We don't in physics, cosmology and in all the other sciences. So perhaps we don't in metaphysics either. In once sense - a sense given by metaphysicians and many philosophers - truth is by definition mind-independent. However, Sider is fusing that position with our metaphysical statements about the world. So is it that we can say that if they are true, then what makes them true is mind-independent?

“The realist picture requires the 'ready-made-world' that Goodman (1978) ridiculed; there must be structure that is mandatory for inquirers to discover.”

There may be a “ready-made-world”. However, I presume that Goodman's point is that we don't have access to it except through our contingent minds, languages, conceptual schemes, sensory-systems, etc. All those things make it the case that we must colour or interpret that ready-made-world. Thus, to us embodied human beings, it's no longer ready-made: we make it (at least in a loose or vague sense).

The other point is that even if there is a mind-independent-ready-made-world, that doesn't automatically mean that everyone – not even every philosopher – will says the same things about it. (Crispin Wright, in his book Truth and Objectivity, believes that we would say the same things if we all had what he calls “Cognitive Command”.) Indeed it doesn't guarantee that contradictory things won't be said about it. (Contradictory things have been said about it!) The world's mind-independence doesn't guarantee discovering Sider's “mandatory structure”; just as it didn't guarantee C.S. Pierce's “future convergence”.

It appears that Sider doesn't accept any of this. He believes, instead, that there are

“predicates that carve nature at the joints, by virtue of referring to genuine 'natural' properties”.

“The world has a distinguished structure, a privileged description... There is an objectively correct way to 'write the book of the world'.”

Neither of these things can guarantee that we “carve nature at the joints” or obtain metaphysical truths about the world. Again:

In addition, is there only one “objectively correct way to 'write the book of the world”?
If there is, then how does Sider know that?

Sider also gets to the heart of the matter (at least in the debate between metaphysical realism and what he calls “deflationism”) when he states the following:

“Everyone faces the question of what is ‘real’ and what is the mere projection of our conceptual apparatus, of which issues are substantive and which are ‘mere bookkeeping’.”

That's certainly not true about everyone; just many - not all - philosophers. Sure, it's true that many laypersons are concerned with what is real. However, they don't also think in terms of the possibility that it's our “conceptual apparatus” that hides – or may hide – the real. Many laypersons believe that other things hide “what is real”: lies, propaganda, “the media”, politicians, religions, drugs and even science and philosophy.

Nonetheless, the philosophical issue of realism does indeed spread beyond philosophy. Take science:

“This is true within science as well as philosophy: one must decide when competing scientific theories are mere notational variants. Does a metric-system physics genuinely disagree with a system phrased in terms of ontological realism feet and pounds? We all think not.”

Or take Donald Davidson's less theoretical example of centigrade and Fahrenheit. These are two modes of expression of the same thing. However, Sider asks if the same can be said of “a metric-system physics” and a “ontological realism feet and pounds”. Does this position have much to do with what's called “empirical or observational equivalence” and theoretical underdetermination? If it does, then theories which are empirically equivalent needn't also be theoretically identical. They're equivalent in that they also carry the same weight (among other things). Sider writes:

“Unless one is prepared to take the verificationist’s easy way out, and say that ‘theories are the same when empirically equivalent’, one must face difficult questions about where to draw the line between objective structure and conceptual projection.”

Sider asks what he calls metaphysical “deflationists” a couple of good questions. He asks:

“Is your rejection of ontological realism based on the desire to make unanswerable questions go away, to avoid questions that resist direct empirical methods but are nevertheless not answerable by conceptual analysis?”

It's hardly surprising - if we take the positions above (alongside my earlier personal reactions) - that Sider himself has heard “[w]hispers that something was wrong with the debate itself”. Despite that, according to Sider:

“Today’s ontologists are not conceptual analysts; few attend to ordinary usage of sentences like ‘chairs exist’.”

It's tempting to say that ontologists should indulge in a bit of conceptual analysis! Not that conceptual analysis should be the beginning and the end of metaphysics; only that it may help things. Thus Sider's statement also begs the following question: What wrong with (a little) conceptual analysis? Who knows, Sider may well have answered that question elsewhere. Indirectly, Sider does comment on conceptual analysis; or at least on what is called ontological deflationism. He writes:

“These critics—‘ontological deflationists’, I’ll call them—have said instead something more like what the positivists said about nearly all of philosophy: that there is something wrong with ontological questions themselves. Other than questions of conceptual analysis, there are no sensible questions of (philosophical) ontology. Certainly there are no questions that are fit to debate in the manner of the ontologists.”

Sider states the position of ontological deflationists; though, here at least, he doesn't offer a criticism of their position.

In terms of conceptual analysis and ontological deflationism being relevant to the composition and constitution of objects, Sider writes:

“... when some particles are arranged tablewise, there is no ‘substantive’ question of whether there also exists a table composed of those particles, they say. There are simply different—and equally good—ways to talk.”

He argues that if we accept conventionalism, then we “demystify philosophy itself”. In his book, Riddles of Existence: A Guided Tour of Metaphysics (co-written by Earl Conee), Sider puts the case more fully:

“If conventionalism is true, philosophy turns into nothing more than an inquiry into the definitions we humans give to words. By mystifying necessity, the conventionalist demystifies philosophy itself. Conventionalists are typically up front about this: they want to reduce the significance of philosophy.”

This is strong stuff! Is conventionalism really that extreme? Is Sider’s account of conventionalism correct? At first blast, the passage above sounds more like a description of 1930s logical positivism!

Do conventionalists say that philosophy is “nothing more than any inquiry into the definitions we humans give to words”? Or do they simply stress the importance of our words when it comes to philosophy? In any case, surely the conventionalist doesn't believe that it's just a question of word-definitions: he also stresses our concepts (i.e., as seen as abstract objects; even if concepts are made known to concrete and contingent minds). That is, how do our concepts determine how we see or interpret the nature or the world? If it were all just a question of word-definition, then conventionalists would be little more than linguists or even lexicographers.

Perhaps conventionalists, on the other hand, don’t give up on the world at all. Perhaps they simply say that our words, concepts and indeed our definitions are important when it comes to our classifications, etc. of the world.

Is that really all that philosophy is concerned with – essence and necessity?

I've just mentioned Ted Sider’s Platonic notion of philosophy’s role, and now we can see more evidence of this.

Sider asks: What is philosophy?

“seems to follow that one could settle any philosophical dispute just by consulting a dictionary!”.

Again, Sider’s take on conventionalism seems thoroughly old-fashioned in nature. However, his Platonist account of philosophy (or its role) seems even more old-fashioned in nature. In fact it seems ancient. This, of course, isn't automatically to say that Sider's positions are false or incorrect. It's only to say, again, that they're ancient. Perhaps they're also true.

Posted by Paul Austin Murphy at 22:30