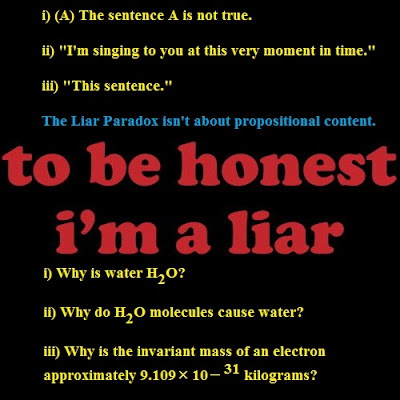 Take these well-known statements from the philosophy of logic. Namely:

What I'm now saying is false.

This is roughly equivalent to saying

and leaving the locution there. Surely no teacher of English grammar would accept this sentence on its own.

So perhaps this well-known example from logic is all down to its syntax and not its semantics. And if it's all down to syntax, then one can see why some logicians have seen the sentence as being logically acceptable. That is, it's about the form/syntax of these sentences (as well as the problems/puzzles/paradoxes they create): not their content. Though if that's true, isn't it a sleight of hand to use sentences which appear to have content?

Indeed a “non-cognitivist” position may state the following:

So let's take another example. Say someone states the following:

I'm lying to you at this very moment in time.

Then a logician can go on to say:

No one will say that the sentence “I'm lying to you at this very moment in time” has no content.

Grammatically speaking, the sentence “I'm lying to you at this very moment in time” is a great sentence - grammatically. We all know what the individual words means and it seems to make sense. However, what is its propositional or semantic content?

The statement “I'm lying to you at this very moment in time” could have propositional or semantic content if the self-accusation of lying refers to other statements the speaker (or liar) had made previously. (Those other sentences would then be false.) However, it's supposed to be a self-referential statement. So what is this man lying about, exactly? He can't be referring to his lying alone because in order to lie, you have to make a claim that's false and also to believe that it's false. Surely the fact is that he's neither lying nor telling the truth.

Mr X is only stating a grammatically-acceptable sentence; though one which has no propositional or semantic content. Therefore he can't be lying or telling the truth.

We can now ask this question:

If the sentence “I'm lying to you at this very moment in time” has no content, then why is it still seen as still being grammatically acceptable?

I'm lying to you at this very moment in time.

I'm singing to you at this very moment in time.

These two sentences aren't equivalent. And that's not simply because one is about lying and the other is about singing.

So what about this more philosophical question? Namely:

Why is water H2O?

Why is the invariant mass of an electron approximately 9.109×10−31 kilograms?

We can also add the following question:

Why is water wet?

An answer to the last question would presumably tell us about the interaction of H2O molecules and human skin; as well as facts about brains, central nervous systems, sensory receptors, etc. It would also involve a subjective component as to what it is like to experience something wet.

Liquidity (not wetness), on the other hand, can be explained by science and without recourse to “phenomenal feels” (or experience generally).

Thus perhaps we should ask the following question:

Why do H2O molecules give rise to liquidity?

However, let's get back to this question:

Why is water H2O?

Isn't this question necessarily unanswerable or even meaningless?

Perhaps, it's just a brute fact that H2O molecules giving rise to water because they equal water. In other words, this “brute fact” isn't amenable to an explanation.

We can also ask:

Why is water constituted by H2O molecules?

Why do H2O molecules bring about (or cause) water?

When we observe brains, on the other hand, we can't touch, taste, or see consciousness. We can experience or our own consciousness; though only from the inside (as it were). So the H2O-water and brain-consciousness questions are similar; though certainly not the same. Nonetheless, it can still be said that the question is bogus even if consciousness has what John Searle calls a “subjective ontology”; whereas water-H2O clearly doesn't.

Posted by Paul Austin Murphy at 23:58