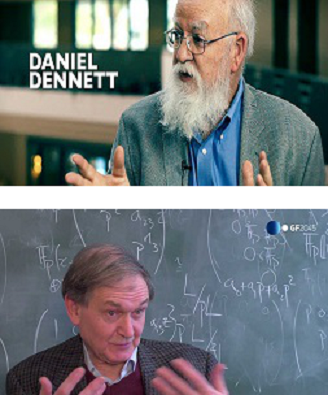 A while back, the philosopher Daniel Dennett made it seem as if the mathematical physicist Roger Penrose took an immediate and emotional position against strong artificial intelligence (sAI). Indeed Dennett quotes Penrose as saying: “Somehow I’ve got to prove that this is wrong.” In other words, Penrose had non-scientific reasons for rejecting sAI… But is that actually a quote from — or even a paraphrase of — Penrose? I say that because Dennett uses the phrase “he thought” rather than “he said”. This may well be a simple slip of grammar on Dennett’s part. Though if not, then Dennett was simply guessing as to what Penrose thought. After all, Dennett can’t have known what Penrose thought unless he told him.

In any case, the main position that Dennett upholds is that strong AI is actually entirely in tune with both physics and biology; whereas Penrose’s position seems to be at odds with these disciplines. In Dennett’s own words:

“[W]hat [Penrose] has seen… is that the only way you’re going to show that the idea of strong artificial intelligence is wrong is by overthrowing all of physics and most of biology!”

This seems to make intuitive sense. That is, it seems that nothing in sAI clashes with either physics or biology. What Penrose argues, on the other hand, does clash with both. But there’s a problem here for Dennett. Physics (as physics) has nothing to say about intelligence, let alone about consciousness or even life. Thus when AI theorists talk about intelligence, consciousness and life, they’re essentially going beyond physics. So in that sense, strong AI isn’t really in tune with physics at all. Of course it can now be said that nothing in sAI actually and clearly contradicts anything in physics. That may be true; though it is hard to decipher how any talk (by AI theorists) of intelligence, consciousness or life could contradict anything in physics.

What about sAI squaring with biology or natural selection?

In any case, Dennett is correct to argue that a “revolution in physics” is required in order to sustain Penrose’s scepticism about sAI. He’s correct primarily because Penrose has himself often talked about the need for such a revolution. Primarily, that revolution is required to square relativity theory and quantum mechanics (see here). However, this revolution also ties in with the revolution that’s required to get to grips with the nature of consciousness — in which both quantum mechanics and gravity, according to Penrose, must play a role at the level of the brain's microtubules (see here).

Posted by Paul Austin Murphy at 00:27