Do you realise just how tiny strings are? 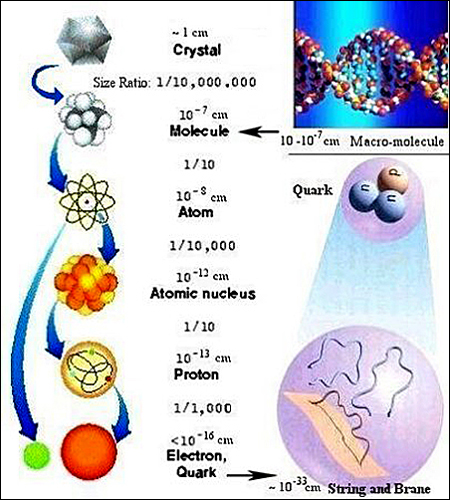 It’s hard to grasp just how small the strings of string theory are.

… Or are strings really in the same boat as particles and atoms once were?

The American theoretical physicist and string theorist Brian Greene puts the problem in this way:

“Strings are so small that a direct observation would be tantamount to reading the text on this page from a distance of 100 light-years: it would require resolving power nearly a billion billion times finer than our current technology allows.”

It’s not surprising, then, that

“[s]ome scientists argue vociferously that a theory so removed from direct empirical testing lies in the realm of philosophy or theology, but not physics”.

So how can we make both philosophical and everyday sense of string theory’s strings?

Yet we simply don’t have that with strings.

Perhaps strings are, therefore, a mathematical contrivance. I say that because many string theorists (more or less) state the same thing. Take the words of the American theoretical physicist Michio Kaku. He wrote:

“My own view is that verification of string theory might come entirely from pure mathematics, rather than from experiment.”

Saying that string theory is hyper-mathematical isn’t to say that strings don’t explain anything. They certainly do. They both explain and unify a hell of a lot of things. However, none of that explanation or unification has anything to do with direct empirical testing.

Thus it is highly unlikely that a string — even in the (near?) future — will ever be observed. But what about the empirical testing of strings in the future? It’s hard to work out what exactly that could mean. How can something so fantastically small ever have an effect in — or on — an experiment?

Despite saying all that, Brian Greene himself has faith and hope.

Greene finds the views of sceptical scientists “shortsighted” or “at the very least, premature”. Yet Greene also acknowledges that “we may never have technology capable of seeing strings directly”. However, he nonetheless concludes that “the history of science is replete with theories that were tested experimentally through indirect means”. But which “indirect means” has Greene in mind for strings? He doesn’t say. (At least not directly after these statements.) It’s hard to imagine that something which would “require resolving power nearly a billion billion times finer than our current technology allows” could even provide indirect evidence. And that may be because (as already hinted at) a string is entirely the child of mathematical theorising. That is, a string is most certainly not the child of physical experiments — or even of any theorising based on physical phenomena.

One point that is never made entirely clear (at least not in popular science books!) is this: if what we take to be a particle is the instantiation of various levels — or types — of energy vibration of a string, then clearly strings can’t be either smaller or larger than a particle. (In the opening image, a quark is deemed to measure 10−16 cm; whereas a string comes in at 10–33 cm.) That’s because a particle actually is a vibrating string. Yet we have indirect physical evidence of particles, but no indirect physical evidence of strings at all.

Posted by Paul Austin Murphy at 22:58