Quantum mechanics is so sexy that it even explains free will and, therefore, mind-body dualism. Or at least John Eccles (who won the Noble Prize in 1963) thinks so.


This is how free will actually works and, up to a point, the account is completely scientific/biological in nature.


The first question is: How does the mind or self affect the brain?


Brain-cells fire “when charged molecules, or ions, accumulate at a synapse, causing it to release neurotransmitters” (John Horgan's The End of Science, page 173).


However, that accumulation of charged molecules (or ions) at the synapse doesn't automatically result in the release of neurotransmitters. It depends. What “triggers the firing of the neuron” depends on something else; not only on the accumulation of ions (molecules).


In this state of molecular accumulation, according to Eccles,


“the ions exist in a quantum superposition of states; in some states the neuron discharges and in others it does not”.


Thus the mind/self must “exert its influence over the brain by 'deciding' which neuron will fire and which will not”.


If all this is utterly physical, can we talk about “deciding” at all? Is it the brain (or the neurons) which decides or the mind/self? Is all this tied to a conscious decision? Is it, indeed, a physical explanation of a mental decision? Indeed Is this a modern version of Descartes' pineal gland explanation of the mind-body problem/relationship?


Another way of putting all that is to ask this question:


Can all these physical things occur (i.e., the accumulation of ions at the synapse and even the “quantum superposition” of physical states) without bringing on board either the mind/self or the notion of a “decision”?


In other words, can we accept this quantum explanation and still leave the mind/self out of the picture? Or is this quantum story part of a theory which successfully explains the interaction of mind/self and brain? (In this case, the self/mind itself fires the neurotransmitters and that interaction itself can be explained in terms of a “quantum superposition” of physical states.)


Despite all that neuroscience (or physical theory), John Eccles still says: “We have no proof of any of this.” (173)


So perhaps what's truly motivating Eccles (as John Horgan suggests) is his aversion to what he calls “cheap materialism”. Indeed Eccles classes himself as a “religious person”. Moreover, he says that


“the very nature of the mind is the same as the nature of life. It's a divine creation". 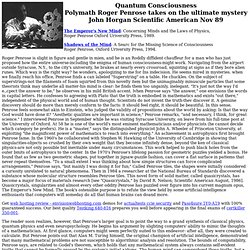 Whereas as quantum mechanics explains free will for John Eccles and Karl Popper, so it explains consciousness itself for Roger Penrose. In fact the two theories tie together in a vague kind of way.


What are microtubules? They're “minute tunnels of protein that serve as a kind of skeleton for most cells, including neurons” (176).


The obvious question is: Why do or would non-deterministic, quasi-quantum computations give rise to consciousness? Is it this argument again? -


i) Quantum indeterminacy is mysterious.


iii) Therefore these things must be related?


Could it simply be that because there's no other answer at present that it's seen that this must be answer? If that were the case, then other outrageous things may be the answer too. Why is this quantum stuff more feasible than ghost stuff or outright dualism?

Posted by Paul Austin Murphy at 03:31