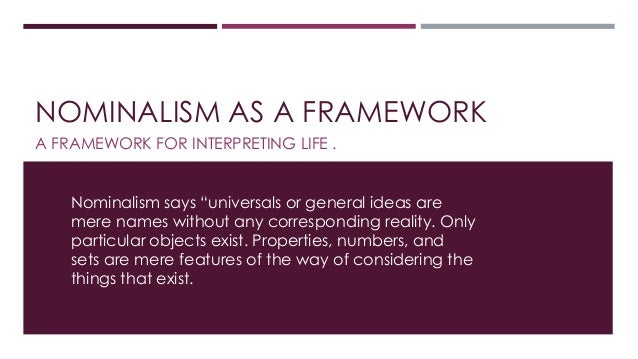 [Although the quotations in this piece have page numbers, I can't remember the books or papers from which they were taken. Some readers may know.]

The realist as regards universals believes that many particulars exemplify a particular universal and that this is a ‘primitive’ or ‘basic’ fact about the world. The nominalist, on the other hand, thinks more or less the same about the fact that “different objects agree in attribute by all being triangular” (1).


The question now is: What do they mean by ‘primitive’ or ‘basic’?


Is anything in the world that is truly primitive? What is the ‘exemplification’ of universals in things? What do the nominalists mean by ‘agree’ in ‘different objects agree in attribute’? Perhaps Michael Loux will explain:


“… we are to take agreement in attribute to be a fundamental or unanalysable feature of the world… There are no prior facts that serve to explain these facts; they constitute the primitive materials out of which we construct our story of the world.”


Of course the notion of fundamentality or unanalysability has been used many times before in the history of philosophy. For G.E. Moore, for example, the property goodness was deemed to be unanalysable. For Wittgenstein (in the Tractatus), simple objects were seen in the same way. In addition, truth is seen this way by many philosophers.


There must be a reason (or reasons) why we “take agreement in attribute” between different particulars. Surely we can't get away with simply saying that this agreement is ‘fundamental’ or ‘unanalysable’ – why should anyone else accept these predicates at all? Aren’t they cop-outs or neat sidesteps of the issue? Just to argue that “every ontological account must take some facts as primitive or basic” (or that physics does the same) is simply not enough of a reason or answer. We need to ask why and how they are primitive or unanalysable. There may, for example, be an argument that such things halt some kind of infinite regress. However, we still need to know why we have chosen the agreement in attributes between objects - or the exemplification of universals as properties - as such primitives.


Just as the nominalist takes the Platonic position "one step earlier" by taking “the original fact that certain things are triangular as basic” rather than relying on the basic fact of the exemplification of universals in particulars, why can’t we also take the nominalist position one step earlier by giving a more substantive and descriptive account of agreement, resemblance or whatever?

The problem is linguistic, according to the nominalist. That is, we believe in the existence of universals because sentences like


have a property (or attribute) as the subject-term (or noun-phrase) of a subject-predicate sentence. And because the name ‘Tony Blair’ in


refers to the person Tony Blair, we assume that the ‘sphericity’ in “Sphericity is a shape” must refer to a universal – or at least to something.


Some philosophers (including Michael Loux) believe that nominalists “deny the existence of properties” (1). If that's indeed the case, then the nominalist


For a start, do nominalists really deny the existence of properties or do they simply think that they're not the instantiations of universals and are thus only found in objects?


In any case, how will a simple reformulation of a sentence alone get rid of universals or properties? If I choose never to refer to God (or use the word ‘God’), that won't take God out of existence. If no one used the word ‘God’, and if everyone reformulated all the sentences which refer to God in a bona fide atheistic manner, that alone wouldn’t get rid of God (as it were).


Loux goes on to explain the nominalist position thus:


“… the sentences appear to express claims about universals, but are really just disguised ways of making claims about familiar concrete particulars… For every sentence incorporating an abstract singular term, it is possible to identify a sentence in which the term does not appear but the corresponding general term does, such that the latter sentence gives the meaning of the former.” (1, Loux, 2002: 65-66)


Of course to the layperson the sentence “Sphericity is a shape” doesn't “appear to express [a] claim about [a] universal”. It simply makes a claim about spherical objects (or, less likely, about the property being spherical). However, if ‘sphericity’ is a noun (or an abstract singular term), then this may not be logically or philosophically acceptable.


In any case, perhaps the layperson is tacitly or implicitly referring to the universal. In that case, both the realist and the nominalist are offering us (or discovering) the true logical form of the aforementioned sentence. The nominalist is arguing that the sentence is a disguised way of making a claim about a universal. The realist is saying that the logical form is apparent; though not (as it were) taken literally when it's not taken as a claim about a universal.


What is the substitution of


that's given by the nominalist? This:


2) “All spherical things are shaped things.”


Prima facie, it's very hard to accept the latter as an analysis (or anything else) of the former! There are many differences between the two.


For a start, 2) is about spherical things. 1) isn't about things at all. In fact 1) is about a shape, not about a thing or things. 1) attributes or predicates something to the property sphericity; whereas 2) predicates something to things. We can even say that 2) is analytic (or partly analytic) in that the subjects (‘spherical things’) are by definition ‘shaped things’. 1), on the other hand, seems to offer us information about sphericity itself – that it ‘is a shape’. However, we can say that this is partly analytic too; though not in the direct manner of 2).


The bizarre thing is that 2) still contains what can be taken as references to universals anyway. Spherical things and shaped things are themselves universals, aren’t they?


Isn’t it the case that in


I would say that


proves Goff’s point that there


Yes, the above ‘analysis’ is proof of this. Goff calls this the principle of semantic irreducibility (PSI). The “reference to properties” is unavoidable in the nominalist analysis. Thus it's semantically irreducible.


Despite the problem for such nominalist reductions, Loux argues that such reductions or analyses are “essential for avoiding a commitment to properties” (2). That is, not properties per se; but property-terms which are abstract singular terms which themselves can’t help but refer to universals. Thus we can ask if Loux is against both ‘sphericity’ and ‘spherical’ (or ‘shaped’) or only against the nominalist use of ‘sphericity’. It must be both because in


the nominalist does get rid of the predicate ‘sphericity’. The question is, is it an acceptable analysis (or reduction) and is it the case that the predicates ‘spherical’ and ‘shape’ don’t refer to properties and therefore to universals? According to Goff, then, Loux is committed to the principle of the necessity of reduction (PNR). Or, rather, Loux thinks that the nominalist must, or should, be committed to this principle and thus be able to formulate an acceptable reduction of all the questionable sentences which include references to universals. If the nominalist can't carry out such a reduction, according to Loux, “then properties exist” (2).


Isn’t all this very linguistic in nature? That is, even if the nominalist can’t successfully offer us reductions or analyses of the suspect sentences which include references to universals, does that automatically mean that universals must therefore exist? Similarly, if the nominalist can (or could) carry out such reductions, would that automatically mean that universals don't exist? Surely what we can and can't do with our sentences (or with our grammar) doesn't affect the existence or non-existence of universals. People use the predicates ‘God’, ‘Pegasus’ and even ‘the round square’, Quine uses the word ‘meaning’ and Paul Churchland uses the word ‘belief’. These people don't believe that these things exist. So why should the sentence “Sphericity is a shape” bring the universal sphericity into existence (as it were)? Likewise why should the sentence


stop universals from existing or even prove their non-existence (even if the above is an acceptable analysis or reduction)? Perhaps, then, such concerns are normative and grammatical in nature. That is, if you think that universals don't exist, then say


and that will be fine. On the other hand, if you think that universals do exist, then say


and that too will be fine. Your particular formulation will show other people your ontological commitments. It will neither prove nor disprove the existence of universals, just as Bertrand Russell's


“There is at least one thing, such that this none thing is king of France.”


show us that the universal sphericity doesn't exist, just as


doesn't show us that the universal sphericity does exist.
Posted by Paul Austin Murphy at 08:03