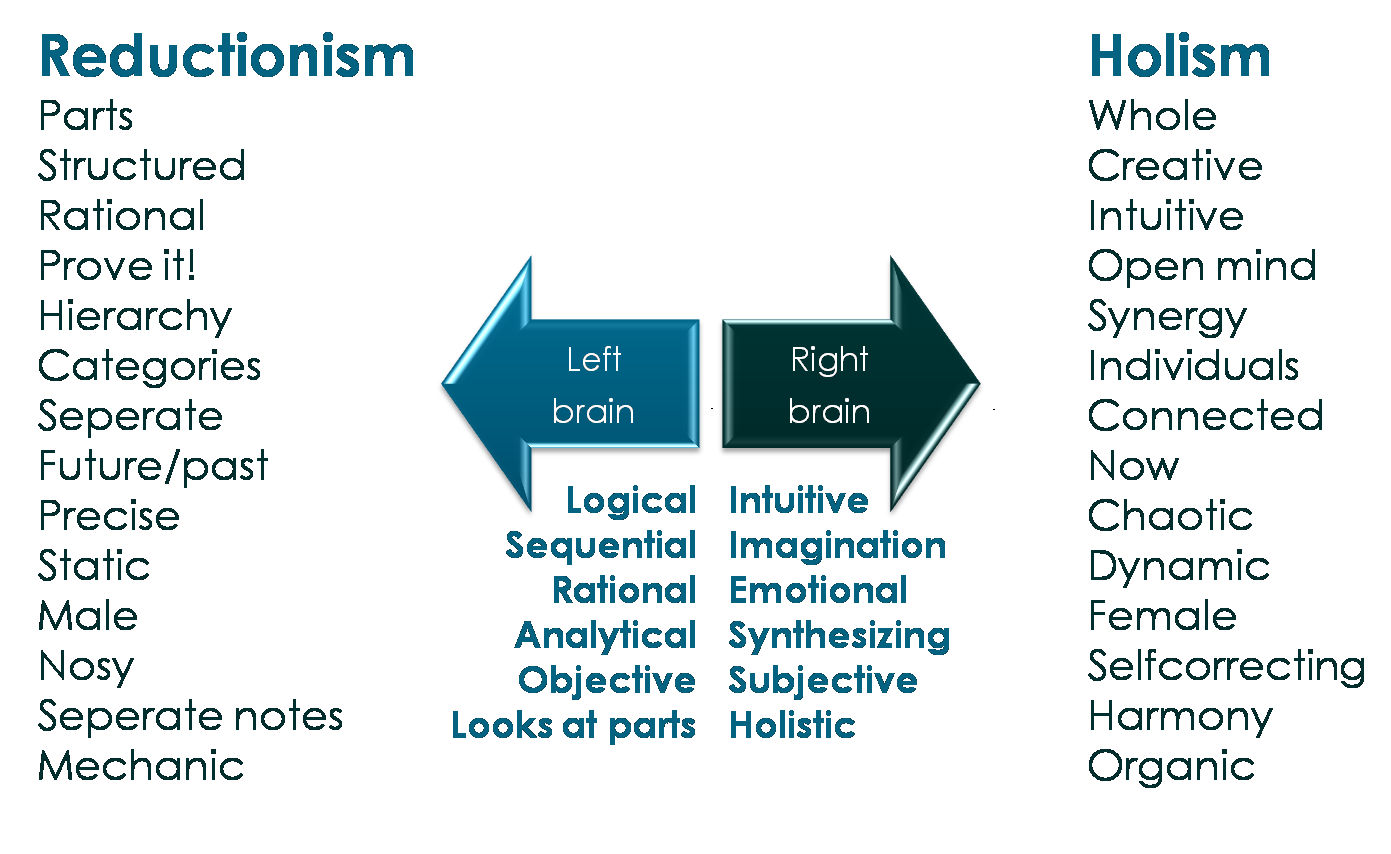 It can be seen that reductionism isn't only a scientific and philosophical obsession - it's actually a human obsession.


People naturally reduce things. They also seek out essences even if there are no essences to seek. Indeed the use of stereotypes and generalisations - in all walks of life - is often a result of this way of thinking. And the thing is - it's not always wrong or suspect. Sometimes there are generalisations which contain a lot of truth - if not the whole true. Stereotypes capture elements of truth. And almost everything can be reduced down to more basic elements; whether material things or problems.


Perhaps physicists and philosophers are indeed the worst offenders. As John Horgan puts it:


“They want to show that the complicated things of the world are really just manifestations of one thing. An essence. A force. A loop of energy wriggling in a 10-dimensional hyperspace.”


Then, ironically, Horgan says that the arch-reductionist - a sociobiologist - may himself argue that


“a genetic influence lurks behind this reductionist impulse, since it has motivated thinkers since the dawn of civilisation. God, after all, was conceived by the same impulse”.


So it's ironic that reductionism - which is the enemy of so many religious people and many philosophers - should itself be seen (by some) as a result of a religious impulse.


As I said about generalisations and stereotypes, many reductions may be largely correct. Still, they could/can never be the whole story - though even this could be deemed a generalisation! It depends, first of all, on what's being reduced. It also depends on what, exactly, is being said about what's being reduced and what it's being reduced to. In the end, the sociobiological claim may not be as monumental and all-encompassing as one first imagines. It's often people's gut reactions to some kinds of reductionism that overstretches things rather than the reductionist himself.


In the end, most people are happy with some – or even many - reductions. This is primarily the case because many reductions don't seem to have any direct impact on human beings as such; either philosophically, morally/religiously or politically.


Earlier John Horgan mentioned that God was “conceived by the same impulse” which drives reductionism. Later he says that “[m]ost of Einstein's contemporaries saw his efforts to unify physics as a product of his dotage and quasi-religious tendencies”. However, perhaps I'm cheating here because that “dotage” was about scientific unification, not scientific reduction. Though unification and reduction often - or always - walk hand in hand.


For example, Horgan cites Einstein's own case in which he “spent his later years trying to find a theory that would unify quantum mechanics with his theory of gravity, general relativity”. This appears to be an endeavor in unification which, at the same time, would have required reductive work. After all, when you get down to the basics (or when you reduce things to quantum mechanics), then that's when you see that things are unified. The unification would come from the reduction of the separate elements. However, it can be said that quantum mechanics is in itself a reduction in that in order to get there (as it were), things/objects would have had to have been reduced to matter and forces; matter, forces and fields to molecules, forces and fields; molecules to atoms; and then atoms to sub-atomic particles.... and what have you. Knowledge of gravity and even general relativity is also the natural result of reductive work in physics and cosmology...


So what about a sociobiologist reducing love down to genes or at least to some other lower (biological) level?....

Posted by Paul Austin Murphy at 03:25