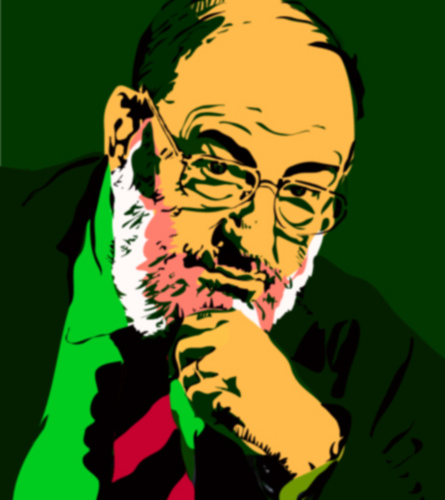 It's strange (at least to me) that a fashionable Continental philosopher should advance what can be deemed to be a commonsensical philosophical position.


The point is that regardless of the literary and philosophical flamboyances of Continental, relativist, postmodern, poststructuralist, etc. philosophers, even they believe that there's a “independent and real world out there” (as it's often put). Sure, that may not be to say much; though Umberto Eco does come close to saying what this position amounts to.


Is it "metaphysical realism"? I don't really know. It depends.


In any case, it all boils down to there being a “red object out there”; as Eco puts it. Or, alternatively, even when relativists (for example) talk about the “silver circle”, they know “that's the moon” (not, say, the sun) that they're “talking about”.


And to demonstrate that point, Umberto Eco says:


“Had Ptolemy pointed instead at a silver circle the other would have said, 'No, that's the moon, we're talking about that object over there.'..."

Of course Eco's opponent may (or no doubt will) simply say: Yes; but what do you mean by “the same thing”? The problem is this same thing is at the very heart of the issue. Indeed, in a certain sense, to say we're “talking about the same thing” is to say very little (philosophically). Though, when talking commonsensically, it's to say a lot.


What Eco appears to do (at least at a prima facie level) is fuse some kind of anti-realism (or constructivism) with good-old-fashioned metaphysical realism. Though because this anti-realism vs. realism debate is so ancient and shopworn (as well as strewn with jargon), then perhaps we simply shouldn't get too bogged down with technical terms and just (as it were) go with the flow of everyday words... at least for now. (For example, most/all constructivists, unlike idealists, accept that there's “an independent world”.... though, again, what does that amount to?)


Anyway, firstly we have Umberto Eco's anti-realism (or constructivism) bit. He says:


“I hold that there can be no truth which is not the result of people interpreting reality, and hence resulting from a social contract.”


And then comes the realist angle. Eco says:


“But when we come across those lines of resistance that prevent us from making certain statements, that is the closest we can get to truth. There is something in reality that decrees: 'No, you cannot say this.'”


Of course it can now be asked what it is, exactly, which allows us to say “you cannot say this”. (Eco doesn't really specify at this point.) However, in his commonsensical example given earlier, that “silver circle” was clearly the moon and not the sun. (It certainly wasn't a flying teapot.)

For example, we can't say is that it's a flying teapot or even the sun; though perhaps in this - and many other examples - what we can say is the case (or true) is open to discussion. (It's not the sun or a flying teapot, maybe; though what about another planet, an optical illusion or the product of our "linguistic scheme”?)


Following on from this, Eco himself says that “[n]egation is the closest thing to truth”. That appears to be something a little like Karl Popper's falsificationism in that it's easier (according to Popper) to disprove (or prove false) a theory than it is to prove it (or show it to be true). Or, if we reject the notion of proof as being applicable to science, we can say that falsification is more conclusive than confirmation or corroboration.


In terms of simple statements or propositions, it's easier (or even more conclusive) to show that p is false that it is to show that p is true. That doesn't automatically mean that if we don't show that p is false, then p must be true. p may have neither truth-value at a particular moment in time. Nonetheless, negation, according to Eco, takes p out of the picture (as it were). Or, in Eco's own words, it's the case that “we cannot say [that p] because it crosses the limits”. (Thus saying that the moon is the sun/teacup “crosses the limits”.)


Umberto Eco boils all this down to common sense. In full, he says:


“I believe that much of the contemporary philosophy of language has rather forgotten that, in the end, they are all talking about the same thing.”


Eco elaborates on the importance of common sense. He tells us “that the basic tool in philosophical thinking is common sense”. What's more, Eco thinks that “for the past thirty or forty years French philosophy has forgotten common sense”. He continues:


“I think it's high time that common sense, so fundamental to the history of philosophy, was reintroduced to the scene. Aristotle was, above all, a man of extraordinary common sense, as was Aquinas.”


It's also interesting that Eco singles out French philosophy. Here again he names no names; though it's fairly easy to work out who he's talking about.


Remaining on the theme of common sense. Eco's fealty to common sense isn't some blind or reactionary adherence to something that can sometimes (even oftentimes) prove to be disastrously wrong. What he's saying is perhaps similar to what Hume, Thomas Reid, G.E. Moore and the late Wittgenstein believed. (Wittgenstein didn't speak that much about “common sense”; he referred more to “everyday language”.) So common sense must provide the grounding of one's philosophy (even of obscure metaphysical speculations). And because it's only a grounding (rather than a constricting chain), Eco also says:


“Philosophy goes beyond common sense in that philosophers question facts or ideas that others take for granted. But to go beyond does not necessarily mean to reject. Nor does it mean to go against.”


And here we have the notion of grounding again. Eco says:


“What it does mean is that the philosopher continues to use common sense in order to tackle problems that everyday life does not raise.”


So it's fairly hard to decide if Umberto Eco's position is realism or some kind of (mitigated) anti-realism. Regardless, it does seem rather commonsensical... if in a philosophical kind of way.

*) All the quotations from Umberto Eco can be found in the book Predictions: 30 Great Minds on the Future (1999). The chapter on Eco is part of an interview conducted by Domenico Pacitti.

Posted by Paul Austin Murphy at 08:28