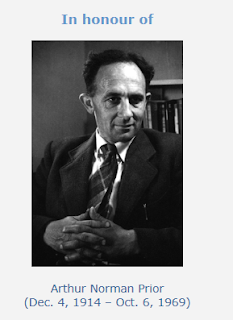 'and' and Analytic Validity

In order to understand A.N Prior's use of the neologism 'tonk', we firstly need to understand the way in which he takes the connective of conjunction – namely, 'and'.

Prior makes the counterintuitive claim that “any statement whatever may be inferred, in an analytically valid way, from any other” (130). Prima facie, that raises a question:

The word 'and' (in this logical sense at least) is understood by seeing its use in statements or propositions.

We start off with two propositions: P and Q; which begin as separate entities in this context. Prior argues that we can “infer” P-and-Q from statements P and Q. The former symbolism, “P-and-Q” (i.e., with hyphens) signifies the conjunction; whereas “P and Q” (i.e., without hyphens) signifies two statements taken separately. However, we can infer P-and-Q from any P and Q. That is, from P on its own, and Q on its own, we can infer P-and-Q. In other words, statements P and Q can be joined together to form a compound statement.

In basic logic, the answer to both questions is 'no'. It's primarily because of this that some of the counterintuitive elements of this account become apparent.

For example, Prior says that “for any pair of statements P and Q, there is always a statement R such that given P and given Q we can infer R” (129). The important word to note here is “any” (as in “for any pair of statements P and Q”). This leads to the conclusion (just mentioned) that the truth-values and/or contents of both P and Q don't matter within the logical context of defining the connective 'and'. It's partly because of this that Prior tells us that “we can infer R” from P and Q. Thus:

All those statements are true; yet they have unconnected contents and a conclusion which doesn't follow from (the content!) of the premises. Similarly with two false premises. Thus:

It's because of this irrelevance of contents and truth-values that R will follow from any P and any Q.

Thus it's no surprise that Prior also says that “given R we can infer P and can also infer Q”. As in this example:

(R/P) Peas are green
(P and Q) Therefore peas are green and the sun is in the solar system.

The difference here is that a compound statement (i.e., P-and-Q) is derived from an atomic statement (i.e., R/P). (Except, in this instance, R should be P and P and Q should be R.) Nonetheless, contents and truth-values still don't matter. Another way of putting this is (as in the argument-form above) that premises and conclusions can change places without making a difference.

If we still have problems with Prior's 'tonk', that situation arises because we fail to see that the “meaning” of any connective “is completely given by the rules” (130).

Prior gives the following example of this logical phenomenon:

Clearly the connective 'tonk' is doing something to the proceeding 2 and 2 are 4 - but what? Could it be that 'tonk' seems to mean add 1 - at least in this instance? That would mean, however, that 'tonk' is the operation of adding 1, which isn't (really?) a connective of any kind.

To express all this in argument-form, take this example:

What is 'tonk' doing in the above? It seems to be cancelling out the statement before (i.e., 'Cats have four legs'). Thus if 'tonk' comes after any P in any compound statement, then Q will cancel out P. If that appears odd (especially with the seeming contradiction), that's simply because, as Prior puts it, “there is simply nothing more to knowing the meaning of ['tonk'] than being able to perform these inferences” (129). In this case, we firstly state P, and then P-tonk-Q (in which Q cancels out P), from which we conclude R.

Nuel D. Belnap helps us understand what's happening here by offering us different symbols and a different scheme. Instead of the argument-form above (which includes P, Q and R), we have the following:

Belnap claims that an arbitrary creation of a connective (through implicit definition) could or can result in a contradiction. Thus, the symbol '?' in the following

However, doesn't Prior's 'Therefore 2 and 2 are 4 tonk 2 and 2 are 5' also contain a contradiction? Prior seems to be stressing the point that in the definitions of connectives, even counterintuitive ones, such contradictions are to be expected. Isn't that the point?

Posted by Paul Austin Murphy at 03:55