A Review of *Metametaphysics: New Essays on the Foundations of Ontology* 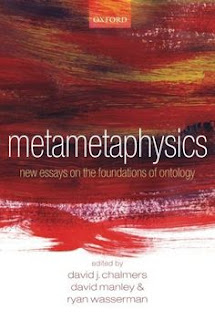 The following piece isn't a review of the whole of Metametaphysics: New Essays on the Foundations of Ontology. That would end up being far too long for a review. Instead I focus entirely on the introductory section ('Worrying about Metaphysics') of the editor's (David Manley) own 'Introduction: A Guided Tour of Metametaphysics'. The introduction tackles all the issues (if in a fairly rudimentary form) which are featured in the book's collection of independent papers.

It seems strange, prima facie, that in a introduction to a volume which is asking questions about the real nature of metaphysics, David Manley (the author of the Introduction) should tell us exactly what metaphysics is. He tells us that metaphysics

“is concerned with the foundations of reality. It asks questions about the nature of the world, such as: Aside from concrete objects, are there also abstract objects like numbers and properties? Does every event have a cause? What is the nature of possibility and necessity? When do several things make up a single bigger thing? Do the past and future exist? And so on.”

What if one metametaphysician (if, as yet, such a description exists) says? -

The idea of there being “foundations of reality” is preposterous.


It can even be said that talk of “the nature of the world” (rather than, say, the plural natures) begs a few questions too. In addition, why accept any distinction between abstract and concrete objects? Or, alternatively, perhaps there are other kinds of objects. Perhaps some metaphysicians even question that there are events in the way that others question the existence of objects. And so on.

Possibly all these questions can legitimately exist and it still be acceptable to talk about “the foundations of reality” and “the nature of the world”. After all, the discussion must start somewhere. And even if a metametaphysician rejects everything contained in David Manley's short descriptive account of metaphysics (above), these basic distinctions are still accepted by many metaphysicians and that's where the deflationist (see later) or sceptical philosopher must start.

Empirically speaking (as it were), it's interesting to note that, according to Manley,

“[m]ost contemporary metaphysicians think of themselves as concerned, not primarily with the representations of language and thoughts, but with the reality that is represented”.

Manley goes on to write that “this approach in mainstream metaphysics” has “only come to ascendancy lately, and is still widely challenged”.

In a very basic sense, this approach is classic metaphysical realism – however you slice it. Thus many other philosophers would be mad (or sad) that this is still the current paradigm for contemporary metaphysicians. Then again, anti-realism (to take alternative to this) has only ever been one option in metaphysics.

It may need to be added here that even though these realist (or non-deflationary) metaphysicians are concerned with “the reality that is represented”, they may still be very concerned with what contemporary science has to say on this or on similar subjects. After all, if science (as with Quine) tells us “what is”, then a realist metaphysician needs to listen to science. Nonetheless, metaphysicians who've been strongly committed to the findings of science have also taken various anti-realist positions. Manley himself stresses the importance of science to both realist metaphysicians and their opponents. He writes:

“And the preferred methodology for answering these questions is quasi-scientific, of the type recommended by W. V. O. Quine, developed by David Lewis, and summarized by Theodore Sider in this volume.”

One can certainly see why many people have a problem with (analytic?) metaphysics. Or at least they would do so after reading Manley's description of a particular ontological position within metaphysics.

The question is: What is an object? Manley writes:

“But it is easy to feel that there is no disagreement—or still less any mystery—about how things are in front of your face. Your hand and fingers are in a certain arrangement that we are perfectly familiar with: call this situation whatever you like.”

Of course it can now be said that Manley has been a little unfair to this ontological dispute on which hundreds of thousands of words have been written. After all, many philosophers say that “intuitions matter”. Nonetheless, many other philosophers say that “intuitions are irrelevant” (or something similar). Whatever the case is, perhaps it's inevitable that we have to start with our intuitions; even if we completely reject them later. And, in this case, the words “call this situation whatever you like” is an intuitive response which many people will have – not least some (or even many) philosophers!

Nonetheless, one can see the problem with any deep trust in intuitions when Manley himself seems to endorse (even if as the devil's advocate) the position that “one is apt to feel suspicious of the methodology behind any theoretical defense of the thesis that numbers do not exist”. That, of course, depends on what's meant by the words “numbers do not exist”. (Or, more basically, on what's meant by the solitary word “exist”.) Here again we're back to the subjects of concepts and language. Despite that, this stress on language and concepts doesn't thereby erase the metaphysical nature of numbers (or lack thereof); it simply helps us to clarify what it is we're talking about.

The Meaty Issue of God?

Manley offers an example which he believes shows that the idea that metaphysics is often trivial and insubstantial (as is purportedly the case with ontological composition) is often misplaced. He says that “the debate over the existence of God is perfectly substantive and has a correct answer”. Apparently this isn't about semantics or language. Yet doesn't it depend on how the word “God” is defined? On some definitions, the issue would be meaty and not entirely determined by language. On the other hand, it would depend of what's meant by the word 'God'. For example, if it refers only to the monotheistic God of Christianity, then it's substantive since such a being has at least some determinate ontological characteristics. (That is, not only Hume's “ontological predicates”; such as eternity, omnipresence, omnipotence.) However, if the word 'God' is defined more loosely, then perhaps the claim that “God exists” may well be insubstantial or semantically suspect. (Say, for example, if the claim “God is nature” or “God is the ultimate mind” is considered.) However, it's not quite that simple. Talk of the God of Christianity may still be a conceptual confused. On the other hand, a vague God may still have determinate characteristics which can be tackled in a philosophical manner. So language is important in both cases. As for the accusations of “shallowness” and being insubstantial, that depends...

“Metametaphysics is concerned with the foundations of metaphysics. It asks: Do the questions of metaphysics really have answers? If so, are these answers substantive or just a matter of how we use words? And what is the best procedure for arriving at them—common sense? Conceptual analysis? Or assessing competing hypotheses with quasi-scientific criteria?”

What defines strong deflationism? According to Manley, it's

“[m]otivated in part by intuitions of shallowness, they argue that the dispute is merely verbal, or that the disputants are not making truth-evaluable claims at all”.

All “merely verbal”? Perhaps not:

Furthermore, what does “shallowness” mean here? (I'm assuming this word isn't only Manley's term for what these deflationists think.) What are (realist?) metaphysicians “shallow” about? Why is what they say shallow? What can they say – metaphysically or otherwise – which isn't shallow? And is it really the case that a dispute – any dispute – can be “merely verbal”? Is that even possible in principle?

Despite my own questions, Manley goes on to say that “[i]n its new forms, strong deflationism poses as serious a challenge to metaphysics as ever”.

The “mild deflationist' position (as enunciated by Manley) is difficult to grasp. Manley tells us that mild deflationists “admit that there is a genuine dispute at issue”; though they also believe that “it can be resolved in a relatively trivial fashion by reflecting on conceptual or semantic facts”. Moreover, “nothing of substance is left for the metaphysician to investigate”. I can't see how all that works. If these mild deflationists admit that there are “genuine disputes” here; then how can they be entirely resolved by “reflecting on conceptual or semantic facts”? Concepts and semantics are of course important; though they can't possibly be the whole story. Unless the remainder is - by (semantic) definition - “trivial” (or “nothing of substance”). But what the hell does that mean? The only situation in which I can conceive of this position (as stated) working would be when it comes to the position of linguistic idealism (or perhaps some other form of idealism) - and even then I'm not sure. Of course the simple solution to my quandary may be to read more of what these mild deflationists actually have to say on the subject.

In any case, can any dispute be merely verbal in a literal sense? Can any dispute be entirely “due to differences in the way the disputants are using certain terms”? Think about it. Despite saying that, perhaps my own problem is that I'm taking the popular phrase “merely verbal” too literally in the sense that surely no one really believes that a dispute is all about semantics and/or language.

Next: Theodore Sider's 'Ontological Realism', as found in Metametaphysics: New Essays on the Foundations of Ontology.