Roger Penrose on Brain & Mind: From the Quantum Scale to the Large Scale (1) 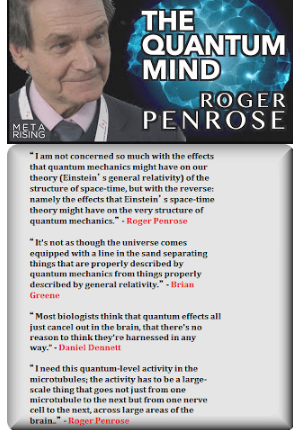 Throughout Roger Penrose's writings on the brain, consciousness, physics and cosmology, the issue of the link between the quantum scale and the large (“classical”) scale is constantly broached. Indeed all this strongly links in with Penrose's attempt to tie general relativity/gravity and quantum mechanics together.

Penrose's own individualistic position on the relation between the quantum scale and the large scale is expressed in the following:

“unconventional that general relativity should have any influence at all on the structure of quantum mechanics!”.

More basically, Penrose believes that “the problems within quantum theory itself are of a fundamental character”.

In terms of the brain and mind, Penrose concluded – again, 28 years ago - by saying that

“any putative quantum gravity theory would surely be very remote from the phenomena governing the behaviour of brains”.

Nonetheless, the following is the crux of Penrose's current position:

i) Quantum gravity (or the “structure of space-time”) may have an impact on quantum mechanics.
ii) Therefore quantum gravity may affect the nature of the brain and mind.

At the most basic level, gravitation and general relativity aren't integrated into quantum theory. That alone makes Penrose's views on the brain, mind and consciousness speculative.

The Quantum Scale & the Large Scale

As stated above, Penrose notes the micro-macro situation in ways which don't directly relate to the brain and mind. In the following, for example, he notes the contextual (i.e., micro or macro) nature of the notion of randomness (or probabilities). That is, Penrose notes how randomness is a consequence of scientists observing quantum effects/events/conditions/etc. at the “classical level”. In Penrose's own words:

“Since randomness comes in, quantum theory is called probabilistic. But randomness only comes in when you go from the quantum to the classical level. If you stay down at the quantum level, there's no randomness. It's only when you magnify something up, and you do what people call 'make a measurement'. This consists of taking a small-scale quantum effect and magnifying it out to a level where you can see it. It's only in that process of magnification that probabilities come in.”

This can be deemed to be an epistemic problem, rather than an ontological one. That is, the probabilities (or randomness) arises not from the ontology of the quantum world, but from our epistemic access to it. (This conclusion, at least as it partly applies to quantum indeterminism, dates back to Albert Einstein and was elaborated upon by such people as David Bohm.)

The other point that's worth making about Penrose's position (as quoted above) is that it goes against the stress on quantum indeterminism as it's often used in reference to the brain and mind/consciousness. In other words, Penrose (at least in this context) is de-stressing the random (or indeterministic) nature of the quantum realm; whereas many others (at least in the debate about mind) play it up. (“Quantum indeterminism” is particularly stressed as one explanation of free will.) Of course it must be said here that the words “random” and “indeterminate” (or “randomness” and “indeterminacy”) aren't exactly synonyms. Nonetheless, in the debate about the “quantum mind” (as it's often put), these words are indeed often treated as synonyms (or, at the very least, as near-synonyms).

If we now return to the quantum scale and the large scale.

On a much broader level we can also take Brian Greene's (a Professor of Physics and Mathematics at Columbia University) general point about this micro-macro distinction:

This position seems to back up Penrose's previous points about how different levels of description (which are brought about by the effect of “measurement”/observation) determine Greene's “line in the sand” between the quantum realm and the “classical” realm.

In the above we can see that rather than measurement (or observation) splitting the universe into two realms, Penrose stresses the respective “limits” of these realms instead.

Roger Penrose was - and still is - deeply aware of the arguments against his central position on the brain and mind/consciousness. Indeed when he wrote The Emperor's New Mind (in 1990) he didn't have an original position on the quantum nature of the brain. Specifically, microtubules aren't mentioned in this well-known book. And even neurons and neurotransmitters only get four mentions.

This is what Penrose also had to say (in the same book) on the opposition's position on the brain, quantum mechanics and consciousness:

“... they would argue that on a scale relevant to our brains the physical effects of any quantum gravity must be totally insignificant! They would say (very reasonably) that although such physical effects might indeed be important at the absurdly tiny distance scale known as the Planck length — which is 10 35 m, some 100000000000000000000 times smaller than the size of the tiniest subatomic particle — these effects should have no direct relevance whatever to phenomena at the far far larger ‘ordinary’ scales of, say, down only to 10 12 m, where the chemical or electrical processes that are important to brain activity hold sway.”

In fact Penrose went further by saying that his detractors would claim that not even ordinary gravity (as it were) can affect the brain. He wrote:

“Indeed, even classical (i.e. non-quantum) gravity has almost no influence on these electrical and chemical activities.”

Penrose concluded with the following sceptical words. (At least as he then believed that they'd be expressed by his opponents.) He wrote:

“If classical gravity is of no consequence, then how on earth could any tiny ‘quantum correction’ to the classical theory make any difference at all? Moreover, since deviations from quantum theory have never been observed, it would seem to be even more unreasonable to imagine that any tiny putative deviation from standard quantum theory could have any conceivable role to play in mental phenomena!”

Thus, at this period in Penrose's career (in the early 1990s), his position squared perfectly well with Murray Gell-Mann's later position when Gell-Mann wrote:

“... what characterises [Roger Penrose's] proposal... is the notion that consciousness is somehow connected with quantum gravity – that is to say, the incorporation of Einsteinian general-relativistic gravitation into quantum field theory. I can see absolutely no reason for imagining such a thing.”

And all this brings us to Dennett's quantum car.

“Most biologists think that quantum effects all just cancel out in the brain, that there's no reason to think they're harnessed in any way. Of course they're there; quantum effects are there in your car, your watch, and your computer. But most things – most macroscopic objects – are, as it were, oblivious to quantum effects. They don't amplify them; they don't hinge on them. Roger thinks that the brain somehow exploits quantum effects...”

We will now need to know why “quantum effects” don't transfer – or apply - to the brain as a whole. Or, more specifically, we need to know why they don't cause (or help bring about) mental phenomena or consciousness. That is, why is there such a sharp dividing line between the micro (Dennett's “quantum effects”) and the macro (the brain or mind/consciousness)? Surely there can't be such a neat and tiny cutoff point between these two worlds. (Then again, it's not logically absurd to argue that there is indeed such a cutoff point.)

Despite all that, according to Penrose, quantum effects/events/conditions do indeed have an effect on the large scale. He makes that plain here:

“The very existence of solid bodies, the strengths and physical properties of materials, the nature of chemistry, the colours of substances, the phenomena of freezing and boiling, the reliability of inheritance — these, and many other familiar properties, require the quantum theory for their explanations.”

However, even though it's true that these “solid bodies”, etc. may “require the quantum theory for their explanations”; that doesn't also automatically mean that such quantum effects are in any way substantive. It simply means that quantum mechanics is a part of the whole picture. So, in the sense of supplying a complete picture of such “bodies” and “materials” - then, yes, of course quantum theory will be required.

Ironically enough, Dennett himself does accept that quantum events/effects/conditions/etc. influence (or affect) the large scale. He says that quantum mechanics is

“stunningly successful at predicting and explaining many phenomena, including everyday phenomena such as the reflection and refraction of lights, and the operation of the proteins in our retinas that permit us to see”.

Of course it may still be the case that because

that this doesn't also mean that

quantum mechanics has an (causal) impact on these things.

And if all this is true of the aforementioned light and protein molecules, then why can it also be true of the brain and consciousness? Of course the parallels between

quantum mechanics and the reflection and refraction of light

quantum mechanics and the brain and mind/consciousness

may not be parallel (or equivalent) in every respect. However, surely that wouldn't matter too much in this case. What matters is whether or not quantum mechanics is having an impact on the brain and therefore on the mind/consciousness. It doesn't need to be the case that quantum mechanics does so in precisely the same way in which it impacts on (to use Penrose's words again)

“solid bodies, the strengths and physical properties of materials, the nature of chemistry, the colours of substances, the phenomena of freezing and boiling, the reliability of inheritance”.

Having said all that, it's of course the case that Penrose is fully aware of the need to explain this micro-macro link. The following is just one example of him doing so:

“For my picture, I need this quantum-level activity in the microtubules; the activity has to be a large-scale thing that goes not just from one microtubule to the next but from one nerve cell to the next, across large areas of the brain. We need some kind of coherent activity of a quantum nature which is weakly coupled to the computational activity that Hameroff argues is taking place along the microtubules.”

So Penrose acknowledges the need to tie the quantum scale to the (to use Penrose's own term) “large-scale”. Basically (as with Dennett's car/watch), there are indeed quantum effects/events/conditions in microtubules – as there are everywhere else. So how can we tie these microtubular quantum phenomena to the large-scale? That is, how can we tie them to nerves and indeed from “one nerve cell to the next, across larges areas of that brain”? In a sense, if quantum effects/events/conditions are happening at the level of microtubules, then (as stated) they must also be happening at the level of nerve cells and indeed across large areas of the brain. But, again, are these nerve cells or large areas of the brain in the same position as Dennett's car/watch? (The one obvious difference is that the former are biological and the latter aren't.)

In the quote above (at the least), Penrose doesn't offer us an answer to these questions. The questions are simply raised. Indeed to use Penrose's own words:

“We need some kind of coherent activity of a quantum nature which is weakly coupled to the computational activity that [Stuart] Hameroff argues is taking place along the microtubules”.

So isn't all this mere speculation?

Whatever the case is, Penrose's positions will require both quantum theory and neurobiological detail to stand their ground. That is, the quantum leap from the neurobiological quantum scale to the brain and mind/consciousness needs much quantum-theoretic, neurobiological and philosophical defence.

Posted by Paul Austin Murphy at 06:40