Searle on Artificial Intelligence (AI) and the Brain's Causal Powers 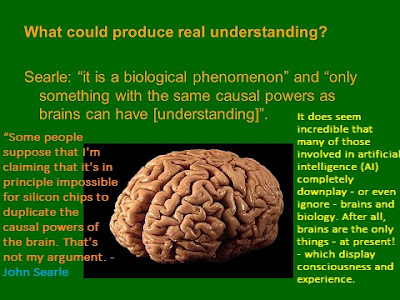 John Searle's position on artificial consciousness and  artificial understanding is primarily based on what he calls the “causal powers” of the biological (human) brain.

This is Searle himself on this subject:

“Some people suppose that I am claiming that it is in principle impossible for silicon chips to duplicate the causal powers of the brain. That is not my argument... It is a factual question, not to be settled on purely philosophical or a priori grounds, whether or not the causal powers of neurons can be duplicated in some other material, such a silicon chips, vacuum tubes, transistors, beer cans, or some quite unknown chemical substances. The point of my argument is that you cannot duplicate the causal powers of the brain solely in virtue of instantiating a computer program, because the computer program has to be defined purely formally.”

[This passage can be found in Searle's paper 'Minds and Brains Without Programs' – not to be confused with his well-known 'Minds, Brains and Programs'.)

It does seem quite incredible that a fair few of those involved in artificial intelligence (AI) and cognitive science generally completely downplay - or even ignore - brains and biology. This is especially the case when one bears in mind that biological brains are the only things - at present! - which display consciousness and experience. Nonetheless, when it comes to intelligence, it can be said that computers already do indeed display intelligence or even that they are intelligent. (Though this too is rejected by many people.)

Thus Searle's talk about causal powers refers to the argument that a certain level of complexity is required to bring about the causal powers which are required for mind, consciousness and understanding (as well as for “intentionality” and semantics, in Searle's writings).

The problem here is to determine what exactly Searle means by the words “causal powers”. We also need to know about the precise relation between such causal powers and consciousness, understanding and, indeed, intelligence.

One hint seems to be that the brain's causal powers seem to be over and above what is computable and/or programmable. Alternatively, perhaps it's just an argument that, at the present moment of time (in terms of technology), these complex causal powers are not programmable or computable.

Indeed at the end of the quote above, Searle moves on from talking about causal powers to a hint at his Chinese Room argument/s. So to repeat that passage:

“The point of my argument is that you cannot duplicate the causal powers of the brain solely in virtue of instantiating a computer program, because the computer program has to be defined purely formally.”

The argument here is that something physical is required in addition to an abstract “computer program” and the computations/algorithms/rules/etc contained within it. And that something physical also happens to be biological – i.e., the brain. In other words, computer programmes are “purely formal[]”. Brains, on the other hand, are both biological and physical. Thus even if programmes or computations capture the “form” or syntax (as it were) of a brain's computations and even of its physical structure/s, they still don't capture its biological physicality. That is, they don't replicate the brain's causal powers.

However, if programmes were instantiated in non-biological physical constructions, then we could - at least in principle - replicate (or capture) both the forms/syntax/computational nature of the biological brain and also its causal powers. It's just that no physical computer (which runs abstract programmes) at present does replicate (or capture) the complex causal powers of the biological brain.

Posted by Paul Austin Murphy at 21:57