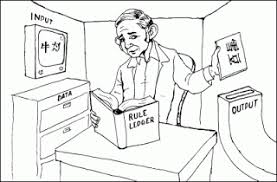 The Mind as a Computer: Syntax and Semantics

The first thing you can say (in accordance with John Searle) is that when a computer manipulates 0s and 1s, it doesn't know what they mean, symbolise, stand for, or what their referents are. Indeed the 0s and 1s don’t have any semantic features. They're purely syntactical. The only thing that matters to the computer is the shape of '0' and '1' – nothing more. That's why, as Searle says, that “any old symbol will do just as well”.


At its most basic, a computer simply scans a tape. Or, if not literally a tape (as in a Turing machine), then it scans something or other. This tape (or this something) will only contain 0s and 1s. What can the computer (or computer ‘head’) do to these 0s and 1s? It can perform four operations:


According to Searle, the human mind doesn’t just manipulate symbols (whatever those symbols are taken to be). What more is there to minds? Well, “minds have contents”. What does content mean? It means that if we're thinking in English (or even manipulating English symbols such as ‘y’ and ‘s’, ‘cat’ and ‘tail’ or ‘The cat has a tail’), it's not just a question of the forms, shapes or syntax of these symbols: we also need to know what they actually mean. Thus in the sentence “The cat has a tail” the words ‘cat’ and ‘tail’ have references, and “has a tail” is predicated of the subject (which is a cat). And so on.


Not only that: some of the words have a sense. The whole sentence has a sense (or meaning) and a truth-value. We have a semantics which includes meaning, reference and predication; none of which matter to a computer because this is a question of content not syntax. That is, formal symbols alone doesn't guarantee or provide semantic content. And without semantic content we have no mind. Thus computers (or their programmes) aren't minds.


Searle sums up his argument thus:

4. Therefore programs are not minds. Q.E.D.


It follows that for minds, semantics is important. Or, more commonly, for minds meaning is important. Because computers (or their programmes) don't have meanings (or know what their symbols mean), then they can't be minds.


So if software (or the program) is enough in itself, then of course the hardware won’t matter when it comes to a computer being a mind or it having mental states. Anything could implement the programme. It doesn't really matter what does so because the programme itself constitutes mind or mental states. In computers it just happens to be silicon chips and electrical circuits. In human beings it just so happens to be biological brains. Of course the programme will need some kind of hardware; though it doesn't really matter which kind of hardware. (In the case of the brain it's ‘wetware’.)


Despite all that, many things can be said to be computers. So to say that the mind is like a computer (or even is a computer) may not amount to much. Searle writes:


“For example, the window in front of me is a very simple computer. Window open = 1, window closed = 0. That is, if we accept Turing’s definition according to which anything to which you can assign a 0 and a 1 is a computer, then the window is a simple and trivial computer.”


Is it really just a question of anything we can assign 1s and 0s to being a computer (or should I say, a digital computer)? In any case, why is it simply just a case of 0s and 1s, why not 3s and 4s as well? Why not the letter ‘S’ or the words ‘hat’ or ‘Jack’? Indeed why not the symbols ‘/’ and ‘*’ instead? From what Searle has said, these shapes or syntactic marks could work just as well. After all, it’s all about syntax and not about what ‘*’ means or what it symbolises or signifies.


“… computation is an abstract mathematical process that exists only relative to conscious observers and interpreters. Observers such as ourselves have found ways to implement computation on silicon-based electrical machines, but that does not make computation into something electrical or chemical.”


This means that neuron firing and internal combustion don't “exist only relative to conscious observers and interpreters”: computations do. Computations need to be observed and interpreted because they're abstract mathematical processes. We can make a distinction between computations (or abstract mathematical processes) and the physical things which implement such things. However, we can't make a distinction between neurons firing (or internal combustion) and the physical things that implement them. Neuron firings just are their physical implementations. They aren't abstract and they're not intrinsically mathematical or intrinsically anything other than physical and biochemical.


The Computer’s Simulation of Mind


If one were a behaviourist or a functionalist, then the behaviour of computers alone would tell us if they have minds. Though, according to Searle, this would be a simulation of minds. That's why we can simulate minds (or the workings of minds) more precisely in computers. But the simulation of mind is not mind. Searle writes: