Theories of Consciousness Must be Biological 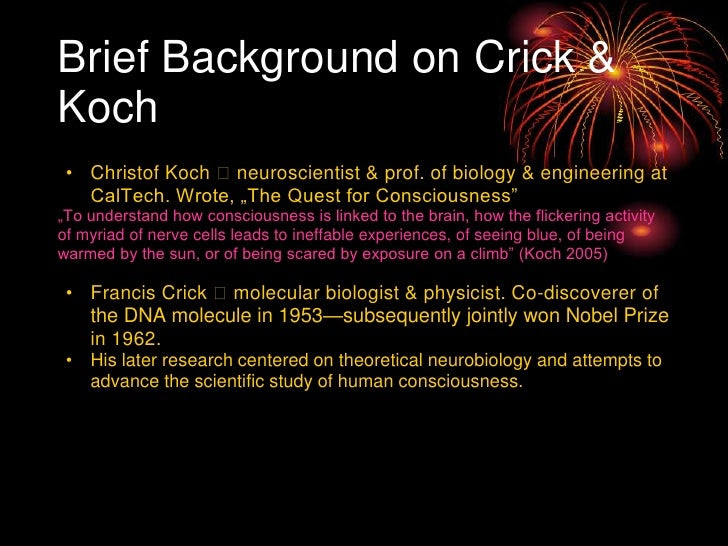 When did consciousness become a (fit) subject for science? According to John Horgan (in his book The End of Science), it was as recently as 1990 – only 25 years ago. This is how Horgan puts it:


“In 1990, Crick and a young collaborator, Christof Koch, a German-born neuroscientist.... proclaimed in Seminars in the Neurosciences that it was time to make consciousness a subject of empirical investigation.” (16)


Following on from that, it could be said that when consciousness became a subject of science; it then also became acceptable subject for (some) philosophers. (Or at least for those philosophers with scientific credentials or who had a commitment to a strong science-philosophy relationship.)


The essential - and some would say obvious - point that Francis Crick made is that the study of consciousness must be a biological - therefore scientific - study. That is, it isn't about “arguing over psychological concepts and definitions” (which is what psychologists and philosophers do); but one of “lots of experiments”.


According to Crick, psychologists (as well as philosophers) “have treated the brain as a black box, which can be understood in terms merely of inputs and outputs rather than of internal mechanisms” (162).


So it's all about the brain. In fact it's even more specific than that in Crick's case.


“can only be understood from a biological standpoint, not through physics or computer science or other approaches that ignore the structure of the brain”. (166)

(Clearly this chimes with John Searle's biological philosophy of mind.)


Edelman, to demonstrate his point, puts the seemingly extreme position of “functionalists” (such as Marvin Minsky) who “say they can build an intelligent being without paying attention to anatomy” (166).


There is a simple reason as to why scientists and even philosophers must now concentrate of the brain when it comes to questions about the mind and consciousness. According to John Horgan, it's


“precisely because philosophical approaches to consciousness have all failed that scientists must focus on the brain” (181).


Indeed another way of putting that is that these philosophical theories of mind all failed (if that's the case) because they completely ignored the brain!


Perhaps philosophers didn't see the brain as being a fit subject for philosophy or even for the philosophy of mind. Nonetheless, many 20th century philosophers certainly did utilise the findings of brain science (neuroscience); especially from the 1960s onwards.


The obvious reason as to why philosophical theories about consciousness - and perhaps the mind generally – are seen as problematic is that they're all “untestable and therefore useless” (181). Indeed it's said that highly sophisticated theories of consciousness (such as those of David Chalmers) are in the same ball park as theories about the Holy Ghost. Or as Christof Koch puts it:


“Why don't you just say that when you have a brain the Holy Ghost comes down and makes you conscious!” (182)


In fact he said that to Chalmers himself!However, Chalmers did reply to Koch's rhetorical question. He said that the theory about the Holy Ghost is “unnecessarily complicated” and that “it would not accord with his own subjective experience”.
Posted by Paul Austin Murphy at 10:05